What did we learn from Q3 earnings?

As the Q3 earnings season draws to an end, market participants are closely scrutinising major companies’ financial results to assess the broader health of the US economy. Even though looming fears of an impending earnings crash were not reflected in the corporate outlook, firms that missed the low projections set by markets were severely punished. Considering that the Fed pushed back on expectations of premature monetary loosening, while forward-looking financial estimates are constantly revised lower, what does the future hold for Wall Street?Financials contract but don't collapse

The last few weeks were eventful for US stock markets as the world’s largest companies revealed their third quarter financial figures, facing extremely tough year-on-year comparisons amid a deteriorating macroeconomic backdrop. Overall, seven out of the eleven sectors of the US economy are on track to post negative earnings growth, with the S&P 500 marking its slowest pace of annual profit growth in two years. What’s more concerning though is that a growing number of industry leaders are starting to downgrade their future guidance as management teams brace for slowing consumer demand and narrowing margins. 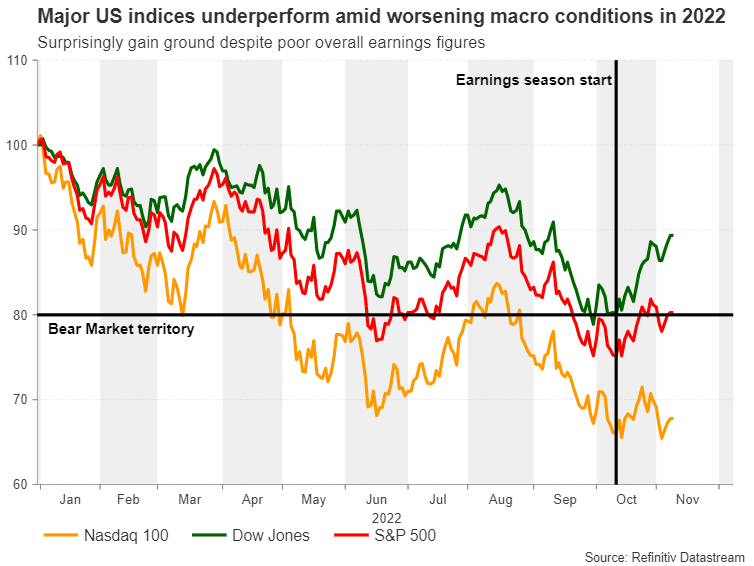 And yet despite this overall poor performance, major US indices are currently trading at higher levels relative to the beginning of the earnings season. This positive market response is most likely attributed to a relief in investor sentiment as the scary scenario of an earnings apocalypse did not materialise. In addition, market participants revived their expectations that the Fed will be forced to ‘pivot’ soon, pressured by increasing signs of weakening consumer demand, while most firms’ future guidance are discounting a recession.

The latest earnings season also reaffirmed that value stocks outperform growth in periods of economic distress. Specifically, tech giants got smoked as they appear to be unable to sustain their spectacular pre-pandemic performance, with Amazon and Meta dropping around 20% immediately after their earnings release. At the same time, energy behemoths have crashed estimates even though oil and natural gas prices are currently trading far below their 2022 peaks.

It is common knowledge that rising interest rates directly reduce the value of companies’ future cash flows, which is an extremely negative development for growth stocks as their performance heavily relies on future profit expectations. Moreover, high interest rates could discourage borrowing, reducing firms’ disposable funds for investment and development spending. Apart from that, tech giants’ financials got a hard hit from the slowdown in the advertisement business, hinting that companies are cutting down non-essential costs in the eye of an approaching recession. 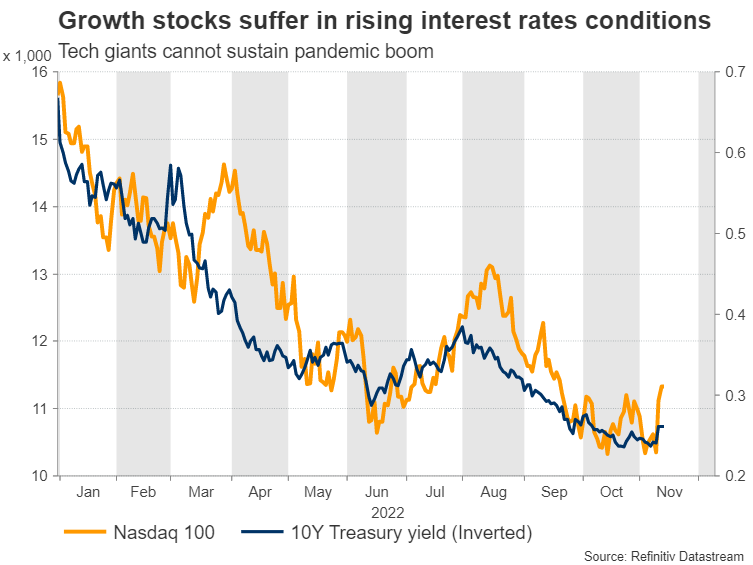 On the other hand, defensive sectors such as consumer staples and energy are continuing to fare well due to their ability to pass on higher prices of essential goods to consumers. Energy giants were by far the biggest outperformers as supply in oil markets remains tight, while governments have not yet imposed windfall taxes on their excess profits. Interestingly, even though ESG has been one of the major investing themes in the last couple of years and most governments have intensified their efforts for a quick transition towards clean energy, oil stocks are currently trading at all-time high levels.

No one could argue that this earnings season did not garner significant attention from stock investors, but there are also some crucial external drivers. Firstly, US equity markets lost significant ground after the Fed approved another 75 basis points rate hike last week and warned against premature loosening. Treasury yields remained elevated as there are still no concrete signs that the Fed has reached its peak hawkishness, suggesting that the stock markets have not probably bottomed yet.

On the flipside, stock markets have historically rallied in the six-month period following the US midterm elections. This time markets have already priced in a Republicans’ victory, which would essentially prohibit President Joe Biden from passing stimulus bills that would keep inflation elevated or increasing corporate taxes that would hurt the stock market.

Considering that there is a significant likelihood of a recession, US stock indices could experience more losses. However, behavioural biases and a Fed pivot could enable them to realise some gains in the short term.

To the downside, bearish actions could propel the price towards 3,700 before the spotlight turns to the 2022 low around the 3,500 mark.

On the flipside, further advances could initially halt at the recent peak of 3,910 region. A break above the latter could open the door for the 4,120 resistance level.