Apple is poised for another stellar performance on Thursday when it unveils its fourth quarter earnings results after the Wall Street’s closing bell. The most valuable publicly traded company is expected to record a solid, double-digit year-over-year growth. Despite its share price appreciation by almost 15% since the beginning of the year, Apple has underperformed slightly the broader market. The underperformance can be attributed to supply chain disruptions and semiconductor shortages, which are seen by analysts as a speed bump in a multi-year super cycle for Apple. Apple’s hardware refresh to catalyse growth

In a recent event, the Cupertino-based tech giant has taken the wraps off its new MacBook Pro, powered by a pair of its home-grown M1 processors. The utilization of the new processors is expected to act as a game changer for the company due to their superior capabilities. Moreover, the company unveiled its third generation AirPods and announced a cheaper Apple Music plan, making the service more affordable for casual listeners. 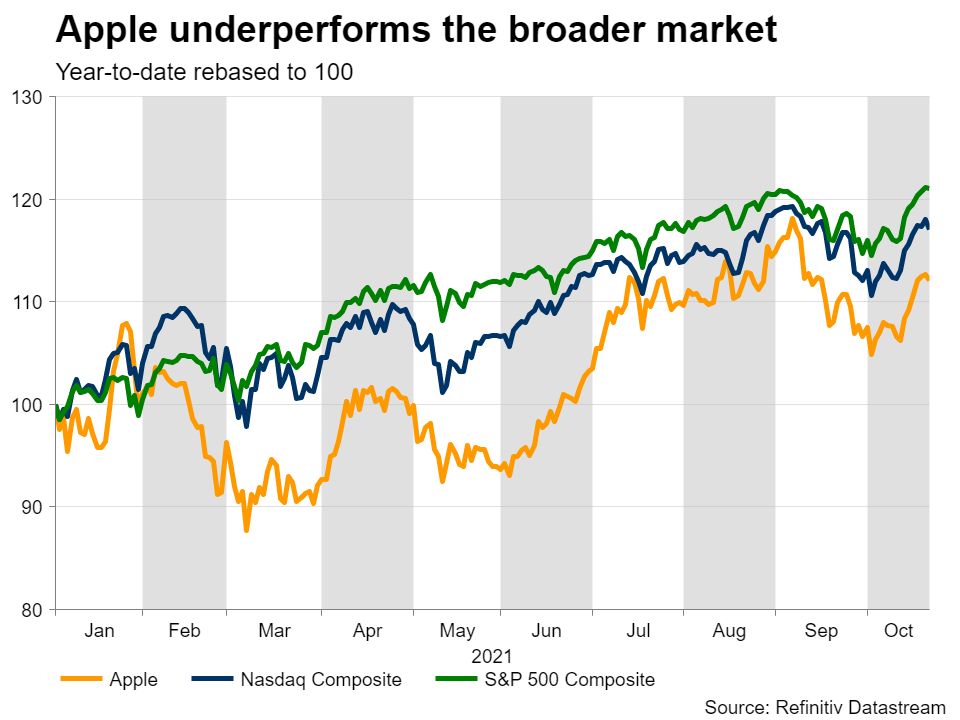 Those upcoming products combined with last month’s release of the new iPhone 13 are likely to catalyse growth, signalling that Apple could currently be in the midst of its biggest hardware refresh cycle of the decade.

Could supply chain crisis bring Apple earnings back to earth?

According to Refinitiv estimates, analysts target $84.8 billion revenue and $1.24 in earnings per share (EPS) for the fourth quarter, marking a 31.1% and 69.3% year-over-year growth, respectively. Also, even though sales of the new iPhone 13 might not affect revenues for this quarter, investors will be waiting for an upbeat guidance sound about the product’s demand ahead of the upcoming holiday season. 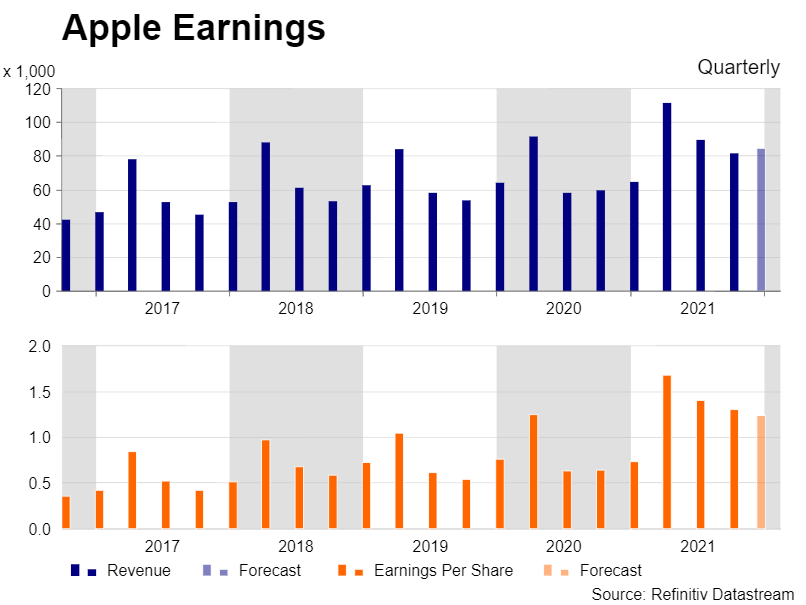 Investors might also anticipate a comment on how the company has navigated through supply chain disruptions and semiconductor shortages. According to Bloomberg, Apple could slash its iPhone 13 production target by up to 10 million pieces as components manufacturers are struggling to deliver enough units. Those problems which appear to be much more persistent than expected could act as a major headwind for Apple’s future sales, even if demand for their products is robust.

Nevertheless, analysts remain positive on Apple’s ability to correct the imbalance between supply and demand by the end of December, as the launch of so many projects at once has been seen as a signal of confidence.

The second piece on the risk puzzle for Apple is the company’s long-running regulatory and legal headaches, which could apply a downward pressure on the service segment’s high margins. Succumbing to global regulators’ pressures has led the company to adjust its compensation policies to favour certain app developers at the cost of Apple’s commissions. Even so, the App Store drama doesn’t seem enough to significantly impact the company’s future earnings.

Apple’s stock has rallied by almost 15% in 2021, with further gains on the table should the company witness positive earnings surprises. Better-than-expected results could push the price above its 150.3 resistance level. Overcoming this barrier, the price could test its all-time highs at 157.26, before entering uncharted barriers, possibly targeting the 160 mark.

To the downside, should expectations come out worse-than-expected, the bears might send the price to test its 50-day simple moving average (SMA), currently at 147.25. Moving below that level, the market might seek immediate support at the 141.3 barrier before testing the strong 138.3 level.

From a valuation perspective, Apple has a hefty forward price to earnings ratio of 25.9, which denotes the dollar amount someone would need to invest to receive back one dollar in annual earnings. However, the Cupertino-based company appears to have a lower valuation than most of its peers from a price to earnings perspective, making its stock more attractive. 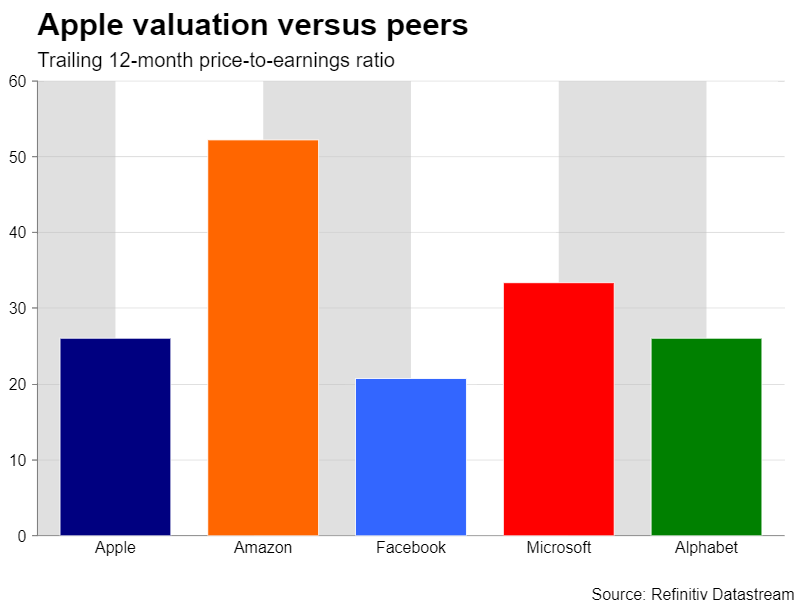 Apple is still seen as a promising bet with no sign yet of the immense popularity of its products waning soon. Moreover, the company has authorized to purchase up to $315 billion of its common stock as of June 26, 2021. Therefore, analysts remain optimistic about Apple’s long-term prospects, maintaining their ‘buy’ recommendation for its stock, setting a median price target of $168.90.