Apple will unveil its third quarter financial results on Thursday, October 26, after Wall Street’s closing bell. Despite the continuously deteriorating macro environment, the most valuable publicly traded company in the world is expected to record solid earnings and revenue figures as its products' sales have been exhibiting remarkable strength. This resilience has been reflected in the share price, which might be down around 18% but has fared better than both the Nasdaq and the S&P 500 so far this year.

Apple holds its ground in a tough year for tech stocks

In 2022, the Fed’s ongoing rate hike cycle to counter inflation has triggered a broader sell-off in tech stocks. It is common knowledge that rising interest rates directly reduce the value of companies’ future cash flows, which is an extremely negative development for the tech sector as its performance heavily relies on growth prospects. 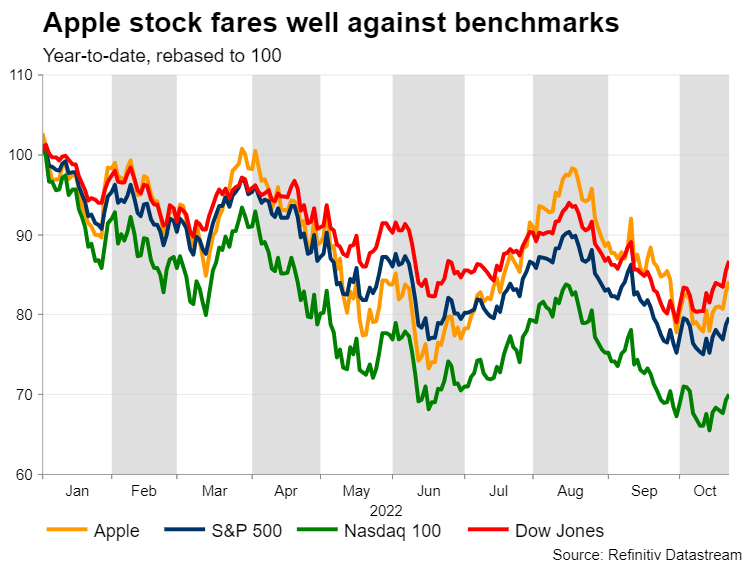 Notably, Apple has managed to fare surprisingly well within this unfavourable macroeconomic backdrop as demand for iPhones, iPads and Macs has been robust amid improving supply-chain conditions. Nevertheless, the firm could soon encounter problems as rising input costs continue to apply pressure on the already inflation-squeezed profit margins.

Even if Apple has managed to deliver results above the low bar set by markets in previous quarters, the firm is expected to face an alarming number of headwinds in the upcoming months. Firstly, Apple’s consumer-centric business will likely face a rocky path amid growing signs that consumer spending is softening globally as monetary tightening and rising costs of living curtail consumers’ disposable income.

Meanwhile, worrying trends for Apple's products have emerged in China as the country is struggling with multiple troubles internally. The strict zero-covid policies and property sector jitters have negatively impacted the broader Chinese economy, significantly denting consumer sentiment. This has been translated into declining retail sales and smartphone shipments in Q3, which in turn hints that demand for Apple products could be weakening.

Summing up, the demand picture can deteriorate even further if we consider that the almighty US dollar will continue to put the brakes on exports. That being said,  Apple's latest decision to cut down the production of the iPhone 14 Plus and to tell at least one manufacturer in China to stop producing components for the model, reinforces investors’ fears over a demand slowdown.

Successful products in the pipeline

On the bright side, Apple still retains substantial growth prospects due to the success of its wide range of newly launched products. In 2022, the firm introduced iPhone 14, new AirPods Pro and a new generation of Apple Watch models. The latest pre-order data showed that the iPhone 14 Pro Max was the best-selling model, surpassing what the older version did in a similar timeframe, signaling that despite the overall demand weakness, Apple is still gaining market share in some business sectors.

At the same time, Apple is exploring the potential for advertising within Apple TV+ as Netflix and other major streaming services have already done. An ad-supported tier of Apple TV+ is planned to be launched in early 2023, with the company expecting to achieve higher profit margins as it will generate revenue through targeted advertisements without increasing its operating expenses for the Apple TV+ segment.

Apple is set to post a solid third quarter financial performance amid a constantly deteriorating macro environment. The tech giant is expected to report revenue of $88.9 billion, according to consensus estimates by Refinitiv IBES, which would represent a year-on-year growth of 6.7%. Earnings per share (EPS) are estimated to jump to $1.27, producing a minor increase of 2.4% on an annual basis.

Even though the upcoming financial results are anticipated to reflect a single digit annual increase in revenue, which is lower than the inflation rate, it should be noted that Apple measures up to a tough year-ago comparison when revenue and profits were surging due to the excess liquidity provided by accommodative fiscal policies.

Valuation has corrected but still a little ‘pricey

Despite the recent sell-off and the broader negative environment for tech stocks, Apple’s valuation remains hefty. The 12-month forward price-to-earnings ratio, which denotes the dollar amount someone would need to invest to receive back one dollar in annual earnings, currently stands at 23.0x. This ratio is not only way higher than S&P 500’s 15.3x but also far exceeds the tech-heavy Nasdaq’s 21.7x. 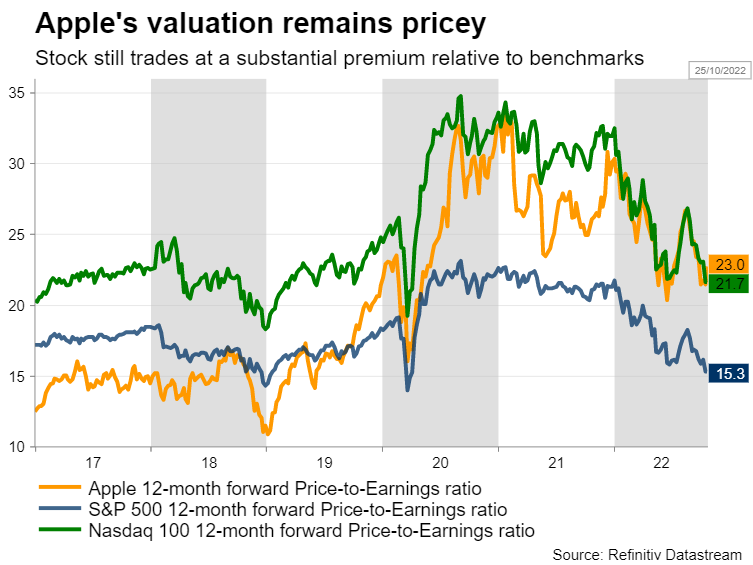 Therefore, it is obvious that investors are betting on Apple’s significant growth prospects. However, it could also be argued that its valuation remains excessive and a potential negative surprise in the upcoming earnings could trigger a sharp decline in the share price as the current premium would not be justified by fundamentals. Nonetheless, in case of a sell-off, Apple retains the cash capacity to intervene by accelerating its share buyback program, which would not only provide a strong floor to the price but also improve EPS by reducing the number of shares in issue.

Despite losing around 18% percent since the beginning of the year, Apple’s stock has been edging higher in the short term.

Hence, if Q3 earnings reveal signs of fundamental strength, the price could ascend higher towards the inside swing high of $152.00. Conquering this barricade, the bulls could then aim for the $164.00 peak.

On the flipside, disappointing financial results may send the price to test its recent support region of $134.40. A violation of the latter would set the stage for the 2022 low of $129.00.