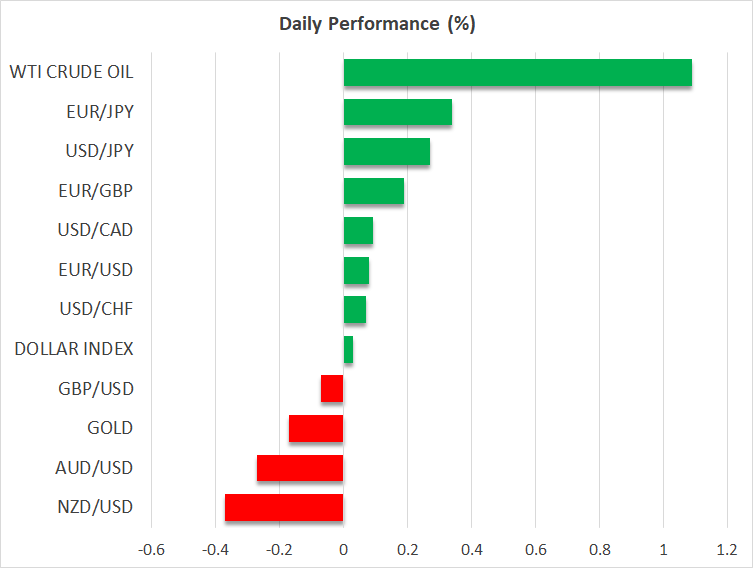 The US dollar continued underperforming all but one of the other major currencies on Thursday, with the exception being the Swiss franc against which the greenback traded virtually unchanged.

The dollar stabilized today, but with the US calendar empty, traders may continue acting based on the latest major catalyst, namely Wednesday’s FOMC minutes. The minutes painted a more dovish picture than the meeting did, with concerns about overshooting and the evolution of policy after reaching a terminal interest rate contradicting Fed Chair Powell’s remarks that it is very premature to be thinking about pausing.

Investors have been already convinced about slower rate hikes henceforth, shifting their bets to a smaller 50bps increment in December, but they still seek answers with regards to the peak of interest rates and what happens thereafter. The minutes added credence to their view of nearly two quarter-point cuts by the end of 2023, and thus, barring any hawkish surprise, they may continue selling dollars heading into next week.

Having said all that, even if the dollar extends its latest deep correction, any bearish trend reversal discussion likely remains premature, especially ahead of next week’s employment report and the December FOMC gathering, when the Committee will publish updated economic projections.

Wall Street returns again today after staying closed for the Thanksgiving holiday, but it will close early. Therefore, activity may remain light, with investors perhaps extending a bit more the latest recovery as they still digest the outcome of the Fed minutes.

Indeed, the improved appetite due to the Fed minutes was not a one-session story, as it spilled over into yesterday’s European trading, with Euro Stoxx 50 and the German DAX gaining 0.39% and 0.78% respectively. The gains may have been larger if it wasn’t for the ECB meeting minutes which revealed that Euro-area policymakers were anxious about inflation becoming entrenched; and that was even before inflation data for October revealed a steep acceleration to 10.6% y/y from 9.9%.

Combined with remarks by ECB board member Isabel Schnabel, who said that discussing smaller hikes is premature and could even prove counter-productive, the minutes allowed market participants to maintain bets about another 75bps hike at the December ECB gathering.

Euro could continue to benefit, but reversal still off the cards

An ECB expected to act more aggressively than the Fed in December could keep the euro supported against the US dollar, especially after Eurozone’s preliminary S&P Global PMIs for November came in better than expected. Yes, a recession in the euro area seems inevitable, but these numbers may have added to hopes that the wounds may not be as deep as was feared a couple of months ago. In contrast, the respective indices for the US were worse than anticipated.

Having said all that though, the recession in the Eurozone is still estimated to be deeper and more prolonged than in the US, which means that the ECB may not have the comfort to continue acting aggressively for longer and may not go as far as the Fed in terms of a terminal rate level. This makes the latest recovery in euro/dollar look like a strong correction rather than a bullish trend reversal, although the breaching of key technical resistance zones, like the 1.0350 area and the 200-day exponential moving average, support the notion for some further advances.

The tumble in oil prices was halted yesterday, with both Brent and WTI rebounding today. European governments stayed split over the level at which they should cap Russian oil prices as the level proposed by the Group of Seven (G7) nations was seen as too high by some and too low by others.

The nations seeing it too high argue that the proposed cap levels would mean no cap at all as Russian Urals crude oil is already trading within the discussed range, while nations with big shipping industries argue that the cap is too low, requesting compensation for their losses or more time to adjust. More talks may be held today.

In the bigger picture, oil traders will keep their gaze locked on China, where another daily record of COVID infections was reported today, raising more concerns about demand from the world’s top crude importer as a reopening anytime soon becomes an unrealistic hypothesis. Therefore, it may not take long before oil prices turn south again and drop below their September lows.