After an upbeat GDP report, July’s CPI inflation will take center stage on Friday at 00:30 GMT, likely testing the central bank’s policy commitment to an ultra-easy strategy for another month as growth in consumer prices, although gradual, is expected to stage another pickup. Despite that, the data may not be enough to change the yen’s short-term neutral status.Japan's inflation to hit a new 8-year high

Central bank policy meetings have been so much agony for nothing in Japan lately. The unstoppable inflation, which is positively charged by supply jitters and the Ukrainian war, forced global central banks, even the dovish ones such as the ECB, to switch to the tightening phase sooner than later. The dove king BoJ, however, has been shrugging off investors’ growing expectations for a hawkish shift, stubbornly holding interest rates at a record low of -0.1% and its yield curve control steady back in July.

Well, despite anxiety thriving about when the central bank will change course, its stance looks reasonable for now. After years of missing the inflation target, policymakers are finally seeing consumer prices rising by more than 2.0% y/y over the past three months under a stimulative policy. Apparently for the wrong reason, as the drivers are more external than internal, but the wait is worth it since the pace of expansion is still relatively anemic when compared to those in other key advanced economies. Particularly, analysts expect the core nationwide CPI to have extended June’s climb to 2.4% y/y in July from 2.2% previously, the highest since December 2014. 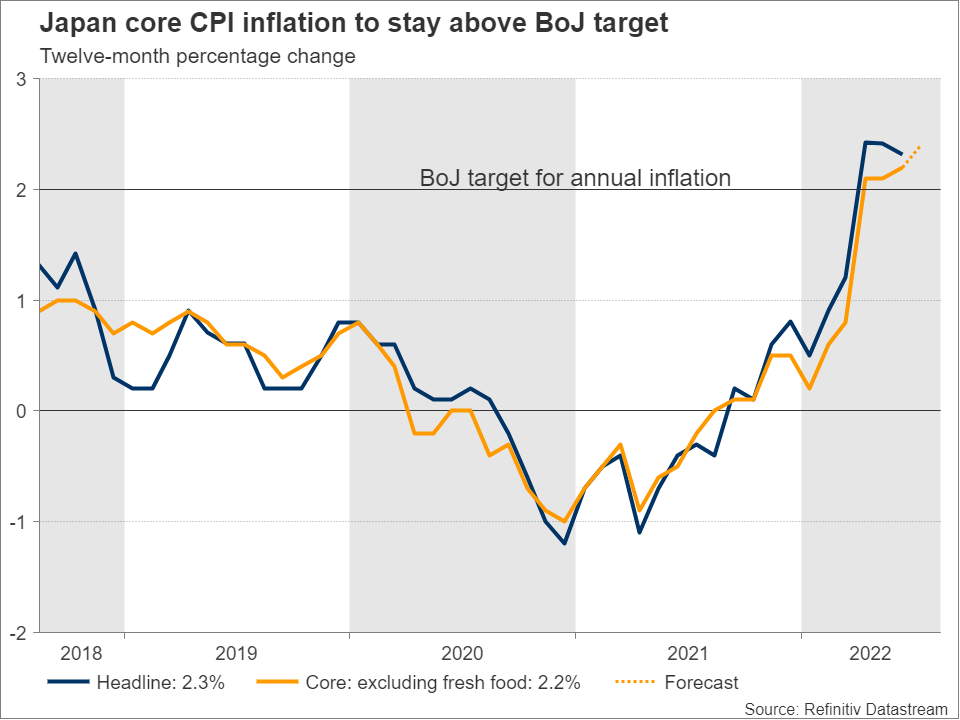 Economic growth is another area that requires caution amid a mixed batch of data. Encouragingly, Monday’s GDP data showed the economy returning to its pre-pandemic size in the second quarter, expanding by an annualized rate of 2.2% on the back of private consumption, which shot up following the lifting of covid curbs.

However, more evidence will be needed to prove that the modest recovery might develop into something more sustainable, especially as the trade deficit gets wider on the back of rising imports and outages in China’s power plants weigh on Japanese factories. Besides, in their latest commentary, policymakers appeared worried that consumer spending may slow down again in the third quarter because of the rising cost-of-living and a potential new covid wave given two months of declines in consumer sentiment. 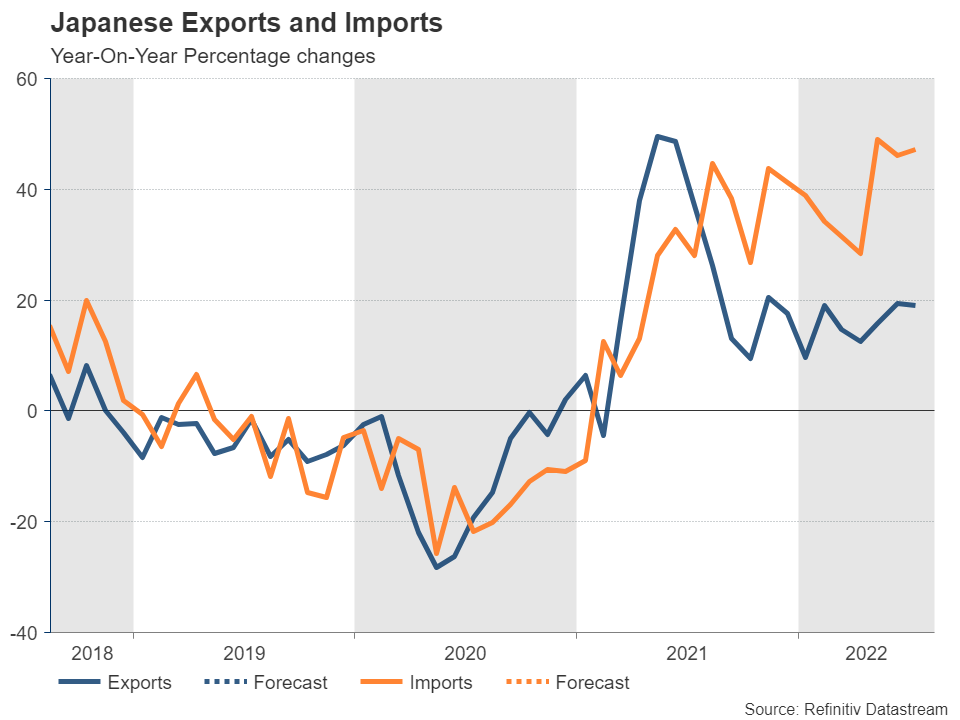 Apparently, maintaining the current super accommodative strategy is challenging, especially as Japanese overseas banking operations are facing some risks from higher US interest rates and potential losses from a possible recession in the US, which makes the BoJ more cautious to hike rates. The deputy governor Masayoshi Amamiya, who is considered a strong candidate to replace Kuroda when his term ends next April, has already cautioned that the central bank must always think of appropriate means to exit stimulus, while the new board members Hajime Takata and Naoki Tamura are already shifting the balance in favor of an exit plan.

Nevertheless, the major game changer for the BoJ is wage growth. Particularly, policymakers would like to see wages rising at a faster pace than inflation to support consumption. However, the outlook is rather uncertain at the moment following the decline of 1.8% y/y in real wages, which was the biggest annual contraction in nearly two years. 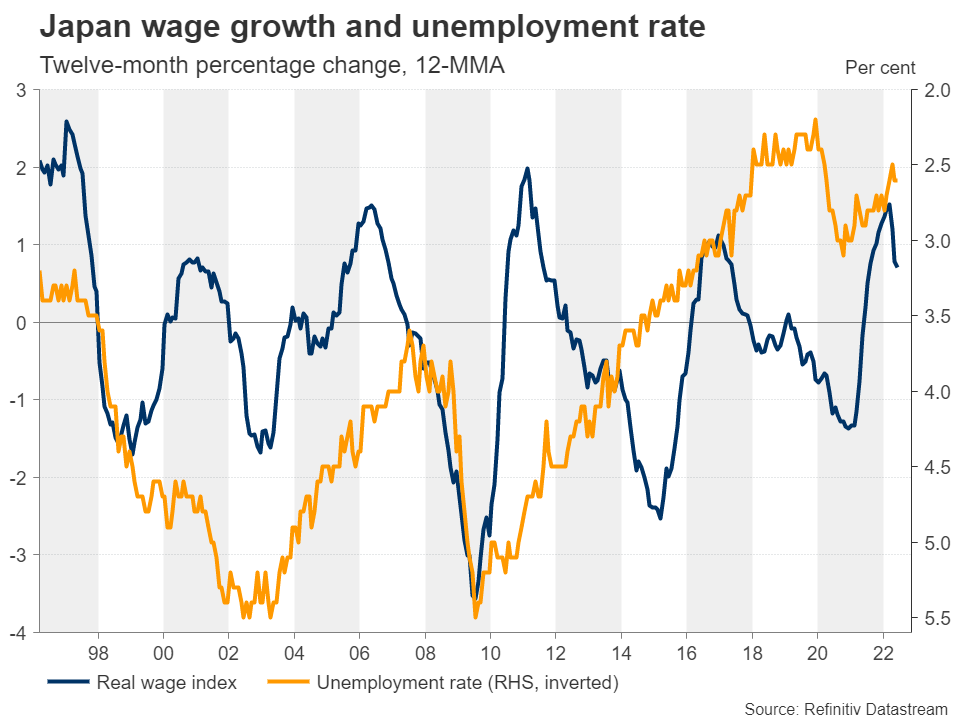 In the meantime, the odds are very low for an immediate policy change according to the futures market, which are convinced interest rates will not change this year. A tweak in the yield curve control could be more likely if inflation sharpens in the coming months and recession risks prove not as severe to halt the tightening cycle in the US and therefore the long depreciation in the yen.

Hence, the yen’s battle against the safe-haven dollar could be tough if the BoJ stays out of the tightening camp. As regards the reaction to Friday's inflation readings, unless a significant upside surprise takes place, the yen may barely gain any momentum. Resistance is currently detected near the 50-day simple moving average (SMA) at 135.45. If the pair breaks that ceiling, it may speed up to 137.88.

On the downside, the 132.80 area has been an important support so far this month. Therefore, an extension beneath that and under the tentative short-term ascending trendline may push for a close below 131.50 with scope to reach the two-month low of 130.38.