Consumer and producer price figures – due Wednesday and Thursday, respectively, at 13:30 GMT – will be the main release out of the United States this week. But with the economic climate being presently overrun by the sweeping coronavirus epidemic, the data will probably be overlooked as policymakers pay more attention to forward looking indicators. It also means there’s likely to be more pain to come for the tumbling US dollar, which has been battered by the collapse in Treasury yields.

Inflation may have peaked

The Federal Reserve’s emergency rate cut earlier this month went against normal monetary policy practice as the central bank slashed the fed funds rate to a target range of 1-1.25% – uncomfortably below the consumer price index (CPI) of 2.5% year-on-year in January. Although the Fed prefers to target the core PCE price index, which, at 1.6% is markedly lower than the CPI rate, the widening gap of nominal interest rates below the broadest measure of US inflation probably caused some unease at the Fed.

CPI inflation was at a 15-month high in January, suggesting price pressures were somewhat elevated at the start of the year. Core CPI, which excludes food and energy prices, was steady at 2.3% y/y, having peaked at 2.4% in August and September. Headline CPI is expected to have moderated to 2.2% y/y in February, while core inflation is forecast to have stayed unchanged for the fourth straight month. 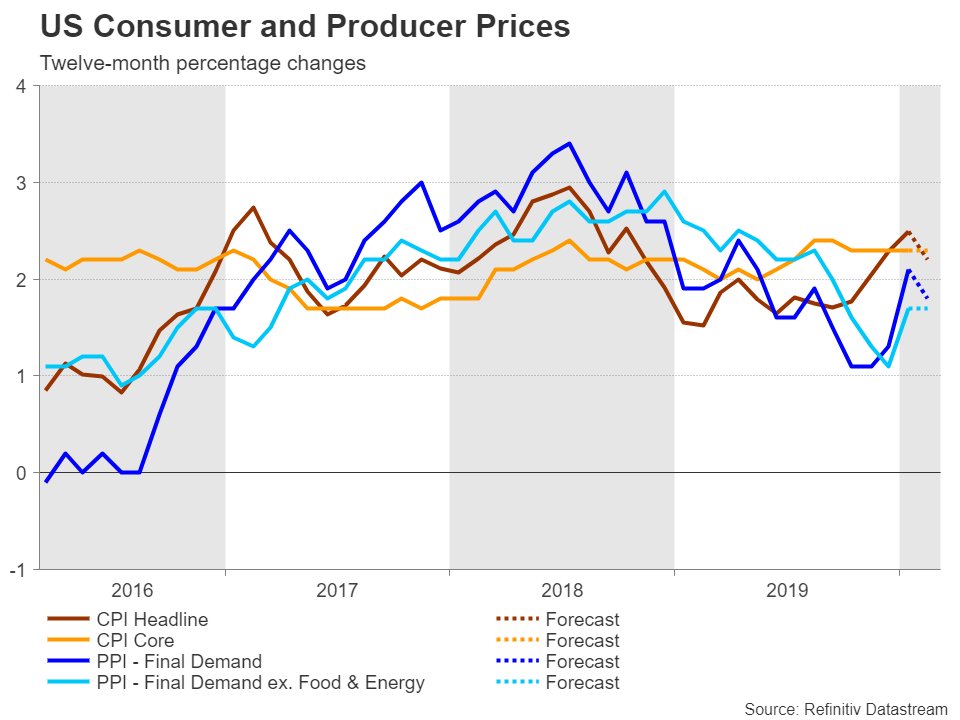 The Fed had already reluctantly cut rates three times in 2019 as an insurance against the trade war so additional easing was the last thing on policymakers’ minds, who were planning on staying on hold during 2020. But as the world is now facing a new and more dangerous crisis, investors are certain the Fed will cut again in the coming months. What is less certain, however, is the pace at which the Fed is predicted to ease.

Market pricing of at least a 75 basis points cut at the regular March meeting may seem a little overdone. But if inflationary pressures begin to subside, the Fed hawks will be less inclined to go against the market. Thursday’s producer price numbers could provide further evidence that inflation has peaked. The producer price index (PPI) for final demand is forecast to have fallen from 2.1% to 1.8% y/y in February, though PPI that excludes food and energy is expected to have held at 1.7% y/y.

If both CPI and PPI begin to recede, this might make investors more confident that the Fed will follow up its emergency 50-bps reduction with another big cut in a week’s time, and this can only imply more downside for dollar/yen. The pair has currently found support near the 138.2% Fibonacci extension of the upleg from 104.44 to 112.21 at 101.47. A breach of this support would open the door to the 161.8% Fibonacci extension of 99.64.

However, if this week’s inflation numbers are somewhat better than expected, they are unlikely to have any impact in trimming rate cut bets, and at best, may help dollar/yen settle around the previous congestion area of 102.60.

This view is reinforced by the latest plunge in oil prices. Unless there’s a quick rebound in oil, the slump alone will likely be enough to push central banks to act as falling energy prices would soon feed into lower input costs for factories and cheaper prices at the gas station.