The retailer is expected to have made $2.50 in earnings per share (EPS) during the quarter ending in June according to Thomson Reuters consensus estimates; a projection which reflects a fall from $2.54 from four weeks ago. Still, if the corporation’s bottom line comes as anticipated, this would represent an impressive increase of 525% relative to the corresponding quarter from last year when the firm earned $0.40 per share. Additionally, Wall Street analysts’ EPS forecasts range from $1.53 to $3.09. Amazon exceeded EPS estimates in three of the last four previously reported quarters, while missing on expectations once.

Corporate revenues, which are projected at $53.41 billion, will also be closely monitored by the investment community. Meanwhile, another area of interest will be the performance of the company’s high-margin businesses, such as cloud (Amazon Web Services), advertising (Amazon Marketing Services) and third-party marketplace; this can act as a bellwether of what’s in store for the future. Furthermore, the management’s guidance moving forward also has the capacity to lead to movements in Amazon’s stock.

Turning to the market’s reaction, better-than-anticipated results by the e-commerce giant are likely to spur long positioning on the stock, with resistance to advances possibly coming around the $1,900 and $2,000 round levels which may hold psychological significance. Conversely, a relatively downbeat report could see the shares come under downside pressure, with support potentially coming around the $1,800 handle and then from the area around the current level of the 50-day moving average at $1,707.85.

The stock recorded an all-time high of $1,863.89 on Wednesday. Technically, it is looking bullish in both the short- and the medium-term. As regards the short-term, the RSI, despite easing a bit on Thursday, has been predominantly on the rise since late June, supporting the previously expressed view for a bullish bias. In terms of the medium-term picture, price action taking place above the 50- and 100-day MA lines is lending credence to the conviction for a positive outlook.

From a price-to earnings valuation perspective, the corporation’s forward P/E ratio (price over forecasted earnings over the next twelve months) exceeds 100 as seen from the chart below, and is far above the respective numbers of its industry and sector. Amazon’s relatively high P/E is an indication of its strong growth potential, though it could also be a signal of an overpriced stock, with the latter rendering the shares susceptible to a sharp sell-off on the back of a “bubbly” valuations narrative picking up steam. It is noteworthy that such panic selling may also provide opportunities to buy the dip, assuming the company’s P/E is in reality justified by its fundamentals. (To clarify, the P/E ratio is the dollar amount an investor would need to invest in order to receive back one dollar of earnings.) 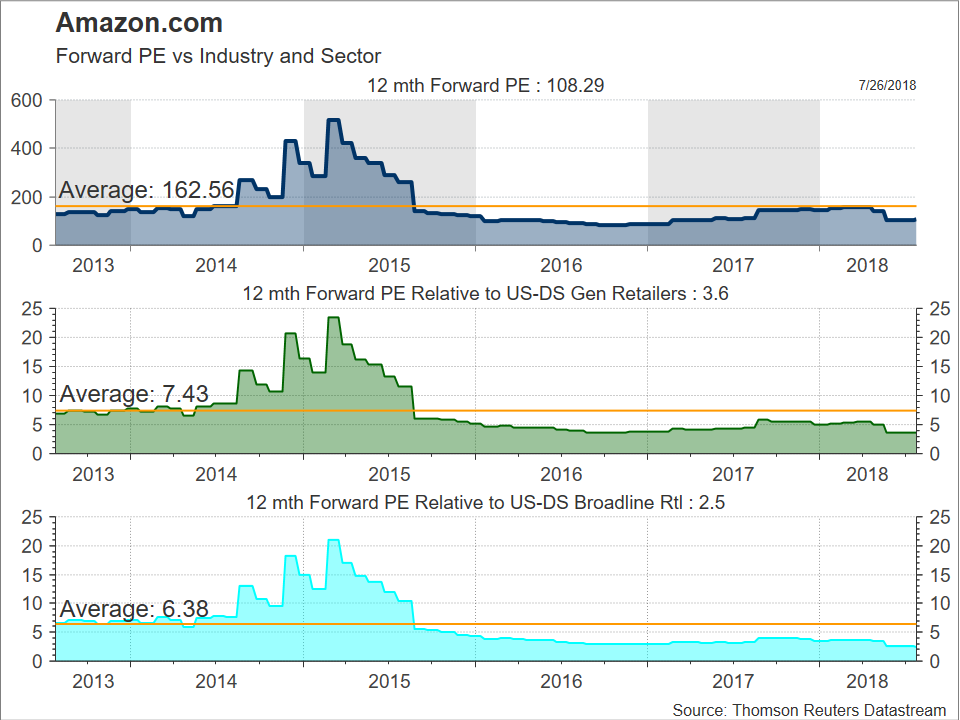 Lastly, Apple and Amazon are the world’s two largest companies by market capitalization. The former’s market cap stands at $957.6 billion and the latter’s at $887.6bn, with the two currently in a “race” to reach the $1 trillion milestone. An upbeat report by Amazon later today may see it win the battle.