Boeing’s earnings report for Q3 2018 is due before Wednesday’s opening bell on Wall Street. The consensus recommendation for the company is “buy”, which is in line with the average consensus recommendation for the Aerospace & Defense peer group. The plane maker’s outlook may well depend on how it performs in China, with the ongoing Sino-US trade dispute acting as a potential drag on Boeing’s prospects.

According to Reuters’ estimates, the aircraft manufacturer is anticipated to have made $3.49 in earnings per share (EPS) during the quarter ending in September, which reflects a drop from $3.54 expected four weeks ago. Still, a bottom line that matches estimates would represent an increase of 28.3% compared to the corresponding quarter in 2017 when the firm earned $2.72 per share. Meanwhile, analysts’ EPS forecasts range from $3.28 to $3.80. It is notable that the corporation delivered an EPS beat in all four previously reported quarters.

Also of importance for the near-term stock price movement will be the figure of quarterly revenues. That is projected at $24.06 billion, down by roughly 1% relative to Q3 2017. Likely to attract more interest will be commercial airplane sales that make up the bulk of the firm’s revenues. Connecting the dots, slightly lower revenues, combined with the predicted rise in profitability (discussed previously), translates into improving margins for the corporation. 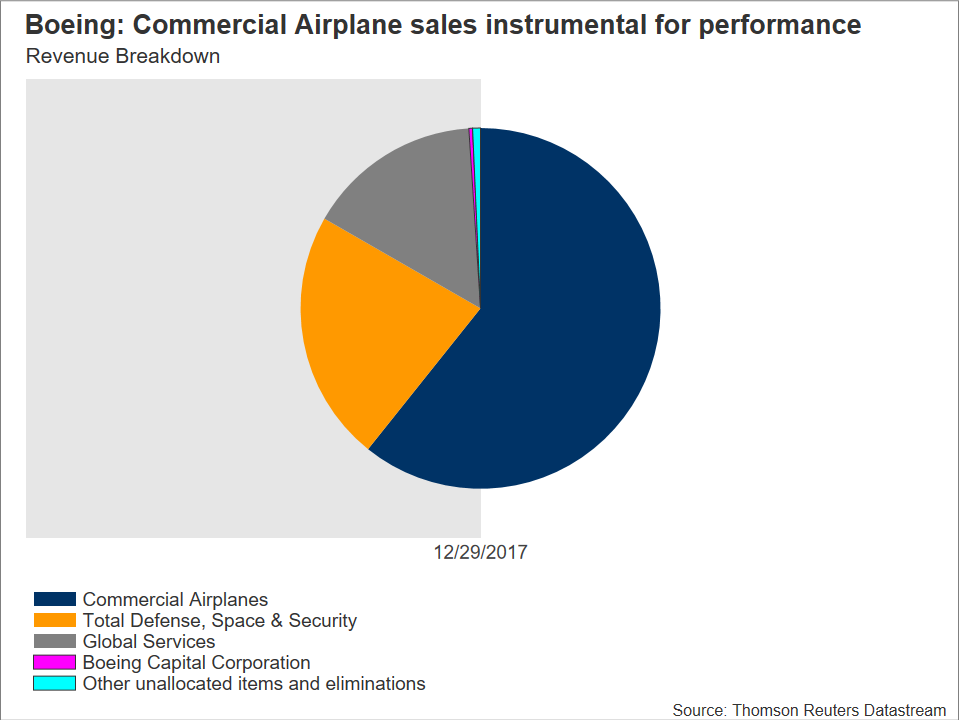 The Chinese aviation market is the world’s second-biggest, with the International Air Transport Association (IATA) projecting that it will displace the US as the world’s largest by 2022. This explains why Boeing’s stock has in the past suffered on the back of escalating trade tensions between the US and China; the fear is that China would choose Airbus – a European company – in placing future orders, or cancel existing orders with the American giant. Management guidance and comments on this during the earnings call following the release of the data have the capacity to lead to movements in Boeing’s shares.

An overall upbeat report and guidance by Boeing are expected to be met with advances in its stock. Given a move above the current level of the 50-day moving average line at $359.06, resistance could come around a previous top at $364.54. Steeper gains would eye the early June peak of $374.48, while higher still, the all-time high of $394.28 would come into scope. On the downside and in case of disappointing data and/or outlook, a first line of support could take place around $354.77, the 100-day MA. Support to sharper losses may occur around a previous low at $337.31. Below, the zone around $328 encapsulates two bottoms from the recent past, while further down the focus would shift to the multi-month nadir of $319.13.

Also “China-sensitive” Caterpillar will be releasing its respective quarterly results before Tuesday’s US equity market open, with EPS forecasted to stand at $2.85. Unlike Boeing, which has so far remained largely resilient to the rising risks of an all-out trade war between the world’s two largest economies (see performance chart below), Caterpillar’s shares have experienced considerable declines in 2018. US tariff action leading to higher steel prices is a negative for the manufacturing behemoth, which by virtue of its business also suffers whenever global economic activity is seen as losing steam, for instance when barriers to trade are erected. 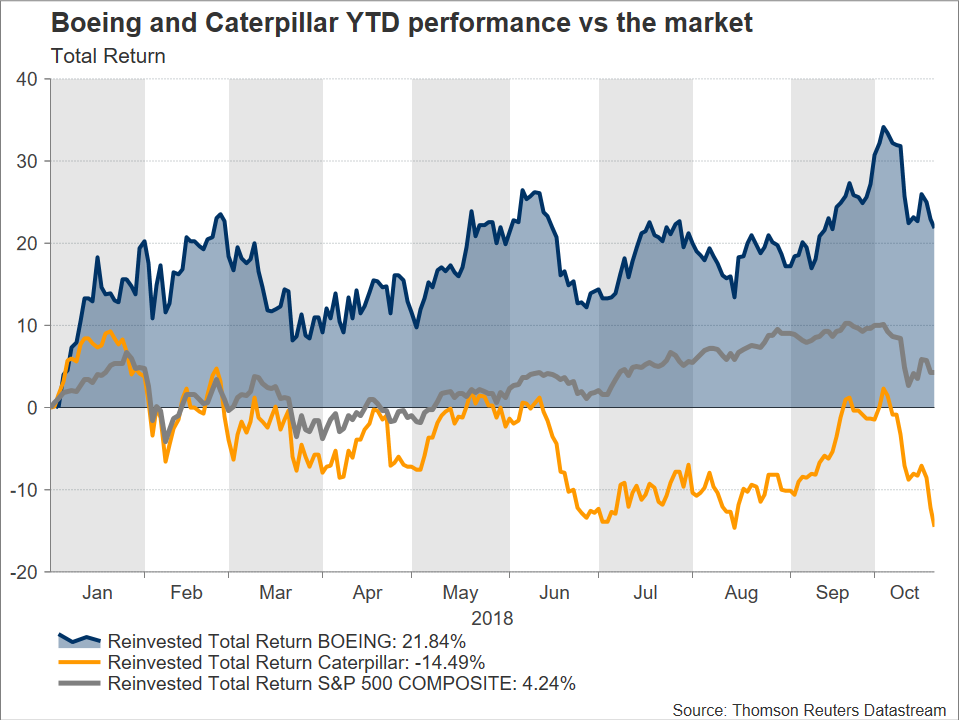 Boeing and Caterpillar are also two of the thirty blue-chips that constitute the Dow Jones Industrial Average, which is up by 2.9% year-to-date. Specifically, Caterpillar is the benchmark’s second worst performing stock, only faring better to DowDuPont.

Heavyweights releasing earnings as the week unfolds include Microsoft on Wednesday, while Amazon, Google-parent Alphabet and Intel’s respective results are due on Thursday.