Amazon’s earnings data for Q3 will hit the markets after Wall Street’s closing bell on Thursday, with the e-commerce colossus expected to deliver another blockbuster quarterly report. Beyond earnings, investors will scrutinize the firm’s forward guidance and expectations for operating margins, in light of rising wage costs and the prospect of higher shipping expenses.

The Seattle-based online retailer is anticipated to have made $3.12 in earnings per share (EPS) during the third quarter, according to Thomson Reuters’ consensus estimates. If indeed the firm’s bottom line matches these projections, it would represent an increase of 500% from the same quarter last year, when the world’s second-largest public company by market capitalization reported earnings of $0.52 per share. It noteworthy that Amazon has a record of exceeding analysts’ EPS forecasts, having done so in all of the four preceding quarters. That said, it did fall seriously short of estimates five quarters ago, back in Q2 2017.

Besides earnings, revenue growth will also be firmly in focus. That figure is expected to have grown by 30.5% from a year ago, specifically to $57.1billion, from $43.7bn previously. Another area that may captivate interest is the performance of its high-margin businesses, most notably its Cloud computing (Amazon Web Services) that has seen accelerating revenue growth in recent quarters, as well as its rapidly-growing advertising business (Amazon Marketing Services). Meanwhile, Amazon’s expanding footprint in the grocery industry through its acquisition of Whole Foods, and any updates on its aspirations to break into the healthcare industry, will be closely watched as well.

Turning to the market reaction, another stronger-than-expected set of data is likely to boost Amazon’s stock. In this case, initial resistance to advances may be found near $1845, the high of October 17. An upside break could see scope for a test of the 50-day simple moving average (SMA) currently at $1910, with even steeper bullish moves likely to stall near the all-time high of $2050.5.

On the other hand, a disappointment in the numbers will probably be met with selling interest. In this scenario, a first line of support to declines may come around $1685, the October 11 low. Note that the 200-day SMA is not far below, at $1662. Even lower, the May 23 trough of $1565 could act as a barrier. If the bears manage to pierce below it too, the April 25 low of $1415 would increasingly come into view.

After the data are released, the company’s management will hold a conference call with analysts to discuss the figures and provide guidance about the future. Hence, any announcements could impact Amazon’s stock price even after the earnings are out. Particularly, investors may look for more color around the recent decision to raise the minimum wage for employees to $15/hour, and the expected impact on operating margins. Moreover, the prospect of higher shipping costs that can further squeeze margins will be another theme to watch, in light of the recent proposal by the US Postal Service to raise the shipping fees for services used by Amazon. 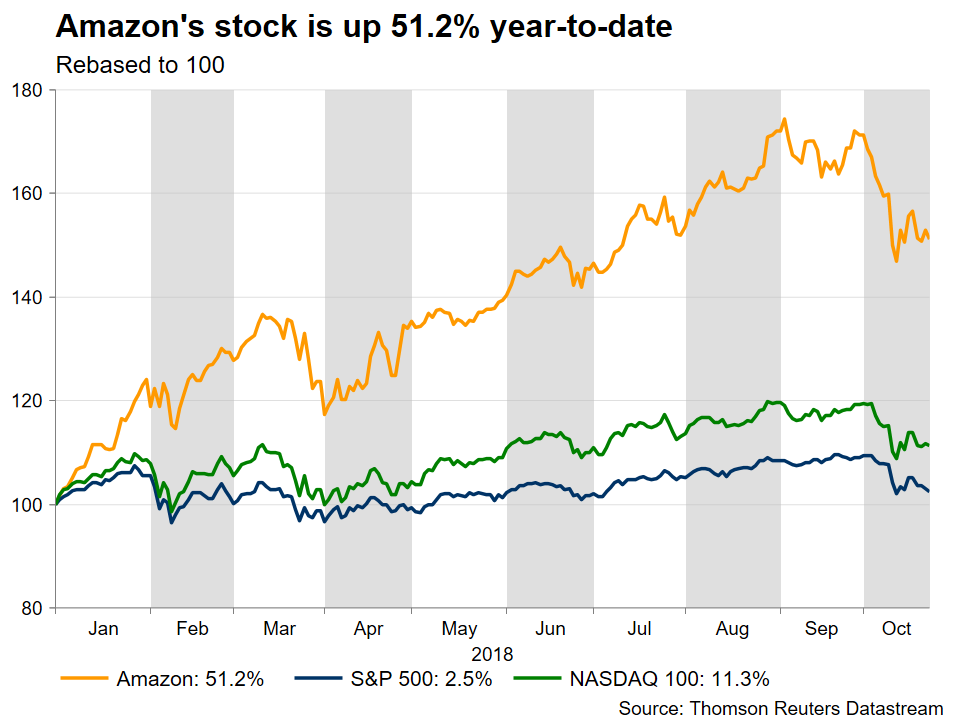 In terms of valuation, although having declined recently, the firm’s 12-month forward price-to-earnings (P/E) ratio still stands at an elevated 74.26. This ratio denotes the dollar amount someone would need to invest in order to receive back one dollar of earnings and hence, the higher it is, the more “expensive” a stock is considered to be. While a P/E ratio as high as Amazon’s would normally signal a “pricey” stock, it could also be an indication of the strong growth investors expect from the firm over the coming years. Indeed, considering that earnings per share are currently expected to soar by an eye-watering 500% from just a year earlier, the current P/E does appear justified. 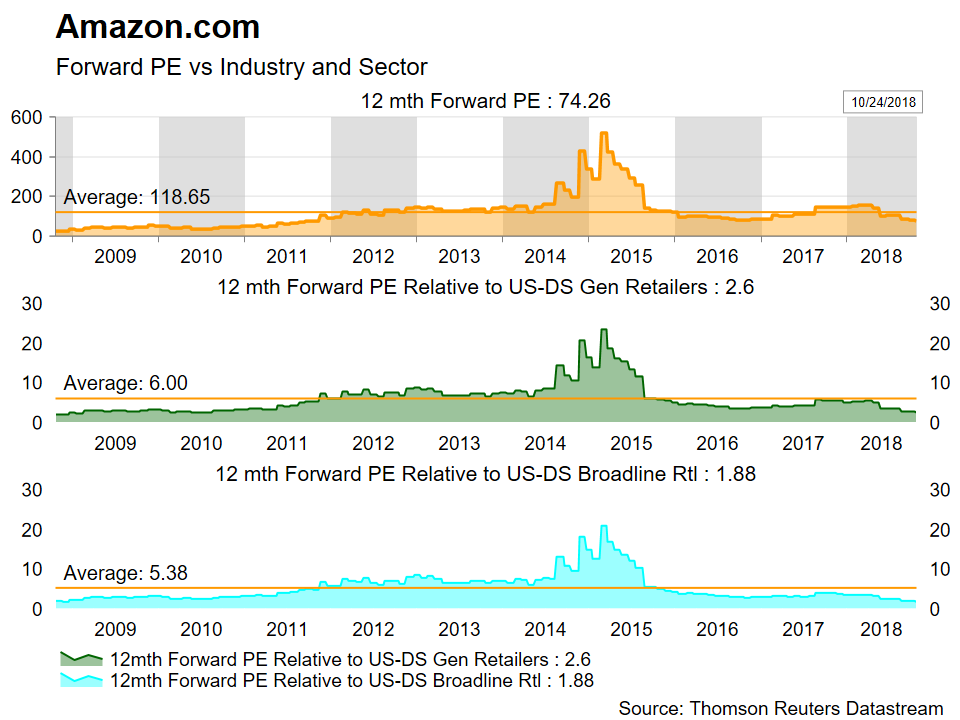 Finally, other major companies releasing earnings after the US market close on Thursday include Google’s parent Alphabet, and Intel. Twitter will publicize its own data before the opening bell.