The media and entertainment conglomerate’s quarterly earnings per share (EPS) are anticipated to come in at $1.95, according to Thomson Reuters consensus estimates. Current projections are the result of a downward revision from $1.97 from four weeks ago, while if forecasts are met, this would represent an improvement of 23.42% relative to the same quarter last year when the corporation made $1.58 per share. Additionally, EPS estimates range from $1.81 to $2.14. Meanwhile, Disney surpassed Wall Street analysts’ profit estimates in three of the four previously reported quarters, while falling short of expectations once.

In terms of revenues, those are expected at $15.34 billion during fiscal Q3, up 7.7% compared to the corresponding quarter in 2017. Special attention is expected to fall on the Media Network segment that makes up the bulk of revenues (see chart below) and which shrunk during the previous quarter, in part due to network subscribers moving away from traditional cable TV packages. 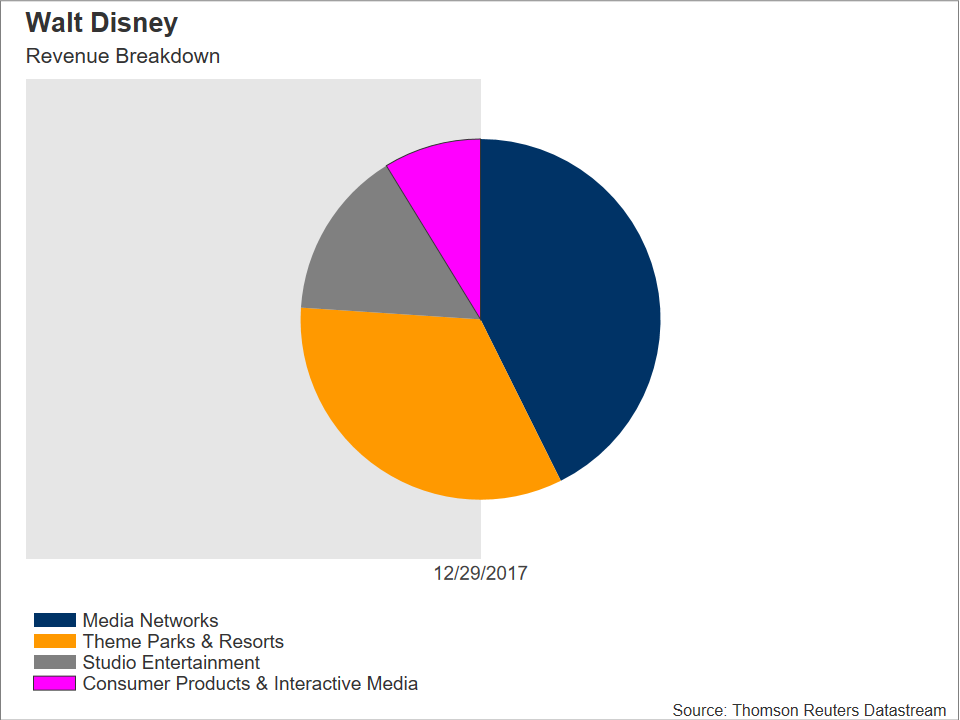 Other areas that are anticipated to be closely watched are details relating to the $71bn deal to acquire Twenty-First Century Fox that was approved by shareholders of the two companies and which, barring regulatory pushback, is expected to go through; for the record, Fox will be releasing quarterly results on Wednesday. Remarks and results having to with ESPN+ – Disney’s streaming sports service –  after its first full quarter since launch, will also be scrutinized. In the meantime, comments and data pertaining to the corporation’s streaming plans are also likely to prove of importance as the firm is increasingly preparing to clash with Netflix next year by offering its own TV and movie streaming service.

In terms of market reaction, an overall upbeat quarterly release by the filmmaker is likely to generate long positioning on its stock. In such an event, resistance to price gains may occur around the $120 round figure, with the region around it also encapsulating the all-time high of $122.08. Conversely, relatively downbeat results could spur selling interest, with support to declines possibly occurring around the $112 handle; the area around this point was congested between late 2017 and early 2018, while it encapsulates a couple of peaks as well. Steeper losses would bring into scope the current level of the 50-day moving average line at $107.01.

Technically, the stock’s short-term momentum appears to be positive, with the RSI being comfortably in bullish territory. Notice though that the indicator is in overbought territory above 70 as well. Thus, should a disappointing report emerge, investors may rush to the exit, either challenging the validity of the recent rally and/or because they will find such an outcome as a convenient opportunity to book profits following the strong gains in previous weeks. Turning to the medium-term picture, that too looks positive, with price action confirming the signal given by the bullish cross recorded in late June when the 50-day MA line moved above the 100-day one.

Disney, which is one of the thirty blue-chips that comprise the Dow Jones Industrial Average, is trading higher by 7.8% year-to-date, outperforming the benchmark’s 3.2% appreciation so far in 2018. The S&P 500’s equivalent performance stands at +6.2%.