The electric car maker Tesla is scheduled to report earnings for the third quarter today after the market close, with forecasts pointing to another weak period. Recommendations are leaning towards selling the stock.

Cost efficiency is the goal

Tesla announced a smaller increase in car deliveries for the third quarter than markets anticipated at the start of October and although this was also below the 100,000 quarterly target set by the ambitious CEO Elon Musk, the company managed to achieve a new record high of 97,000 versus the previous peak of around 96,155.

Why does the famous electric car maker push efforts to increase deliveries? That is because such a strategy would spread costs – mainly fixed costs – to a larger number of goods, making each unit less expensive to produce and hence more profitable.

Disappointingly though, Tesla has been constantly printing negative cash flows for more than four-years now, while its gross profit margin has yet to show an upward direction, providing no signs of cost efficiency.To move forward, the company decided to simplify its offerings by limiting the variants of Model X and Model S this summer, something that increased the base price of these models, and cut prices for its mass-market Model 3. In addition, it recently received government approval from China and help from authorities to speed up construction of its Chinese plant and start full-scale production in Shanghai probably in April 2020, where affordable versions of Model 3 and a planned future Model Y will be built alongside batteries. This is an attempt by the company to widen its market outside the US and avoid higher import tariffs imposed on US cars.

Elon Musk has another quarter to achieve his annual goal of around 360,000-400,000 vehicle deliveries by the end of the year. Having missed targets over the past three quarters, analysts are wondering whether Tesla will manage to produce at least 105,000 units in Q4 to reach the lower end of its target range and are also anxious to see whether China’s factory can ramp up production given the challenges around the labor performance, suppliers, the slash in electric car subsidies as well as the slowing Chinese economy, among others.

In Q2 Musk said confidently that Tesla could break even in Q3 and return to profits in Q4. According to Refinitiv estimates, net income is expected to show a smaller loss of $79.27 million compared to the loss of $198.47mln reported in Q2, with the measure expected to turn positive at $70.56mln in Q4, an outcome that could lead to an annual decline of $658.33mln versus $227.07mln in 2018. 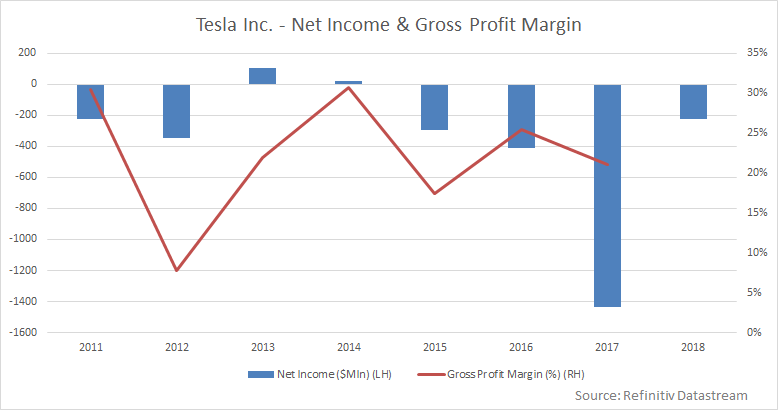 The fourth quarter could likely bring some smiles to Tesla as cars will no longer be eligible for a federal tax credit next year and buyers could potentially push forward their purchases to avoid extra costs in 2020. New production in China may also boost deliveries, but more importantly the company needs to show improved efficiency at a time when other car makers such as Ford and General Motors are trying to progress in the EV market too.

On Wall Street, Tesla’s stock price is down by 23% year-to-date (YTD), being nearly at the bottom of the worst performers in the Nasdaq 100 index which is up by 24% YTD. Encouragingly, its stock price continues to hold an upward direction since the end of May which looks now to be developing into a double top pattern with a neckline around 211.00 and heads near 265.00. Should the earnings release appear stronger than expected, particularly the gross profit margin that gauges production efficiency, and a positive conference call follow especially regarding Q4 guideline, Tesla’s stock could rally towards the 265.00 resistance area. Moving higher, the door would open door for the 274.50 barrier.

In the negative scenario, a miss in the data and a more cautious tone by Elon Musk could see a retest of the 250.00 support level, while a steeper decline could stall around 230.00 and then near 222.00. Yet the biggest challenge remaining would be the 211.00 neckline, where any decisive step lower could trigger a sharper sell-off.