Tesla’s share price soared sharply higher by 42% after hitting three-year lows in early June but the rally may come under test next week when the electric-car maker announces its earnings results for the second quarter. The report will be available for review on Wednesday after Wall Street’s closing bell and even though analysts expect improvement, the company must prove that it can return to profit for its stock to keep running towards the way-above December peaks.

Making profits could be tough

The Chief Executive Officer, Elon Musk, made headlines this month, saying that sales in the second quarter jumped by 51% from the previous quarter to a new record high of 95,200 vehicles compared to 90,700 registered in end of last year. Given that 7,400 more cars were not transferred to their buyers and therefore were not tracked in the sales yet, investors are optimistic that the third quarter could be strong too. The government, however slashed its tax credit for Tesla purchases to half earlier this month, renewing concerns about consumer demand, particularly after a similar action by the authorities in January was followed by a slump of 31% in deliveries in the first quarter. Recent news that the automaker is limiting the varieties of higher-margin model X and model S, and is lowering the starting price of its more-affordable and best-selling Model 3, added further worries that challenges remain within the firm.

Tesla needs to speed up production by more than 200,000 to meet the lower end of its 360,000-400,000 target for the whole year. While US consumers could boost their buying of electric cars before the government potentially eliminates the tax subsidyin the end of the year, markets wonder whether a rise in deliveries could weigh on profits. Fewer sales of the high-margin models S and X would likely squeeze profits in the auto sector, while doubts are also increasing about whether a cheaper version of Model 3 which accounts for 80% of total sales, could afford to repay itself and particularly its major cost battery component. Rumours are spreading that Tesla is working on making its own batteries at a time when its relations with its battery supplier Panasonic are said to be at odds. If true, the company could reduce its exposure to battery price increases from manufacturers. Yet, to minimize its cost, the car maker should produce more efficiently than Panasonic does, something that might take time and money to achieve. 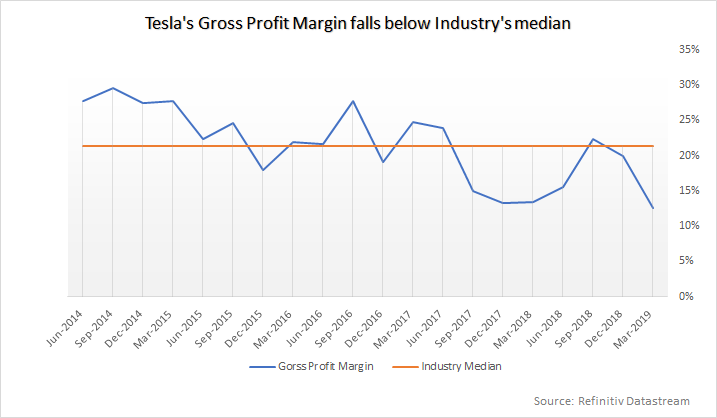 Turning to Q2 earnings results, Refinitiv expectations are for a smaller loss of 0.48 in earnings per share (EPS), compared to a sharper decline of 1.77 in the previous quarter. That would also represent a whopping 80% increase from a year ago.

In terms of revenues, the automotive sector is expected to have collected $6.42 billion, up from $4.54 billion in Q1 and 60% higher than a year ago.

Markets will be also closely reading the cash flow statement, a profitability metric, to evaluate Tesla’s financial performance after the management said it expected to return to positive numbers in Q2.

Nevertheless, the average recommendation for the Tesla stock is “hold”, the same as for the peer of auto and truck manufacturers.

In Wall Street, Tesla’s stock remains 23% down in the year despite June’s rebound, though an upbeat second-quarter earnings report next week could restore some credibility, helping the share price to extend uptrend further above the 200-period simple moving average (SMA) in the four-hour chart and towards the 270-280 key area.

Alternatively, a worse-than-expected outcome could send the price below the 200-period SMA and near the 240 -230 restrictive zone amid speculation the company may fail to meet its targets in the end of the year and continue to under-perform in the wake of a more aggressive US-Sino trade war. Note that the US and China are the largest markets for Tesla cars. A new factory is also under construction in Shanghai, scheduled to start production by the end of this year.