After raising interest rates by another 50bps in September, the RBA meets again to decide on monetary policy this Tuesday at 03:30 GMT. Following remarks by Governor Philip Lowe that the pace of rate hikes may slow from here onwards, investors are leaning slightly towards a 25bps increase this time. However, they see a higher terminal rate than they’d been projecting ahead of the prior meeting. Ergo, they may be eager to find out whether they are right or not, so they can adjust their aussie positions accordingly.Governor Lowe signals slower rate hikes

When they last met, RBA policymakers increased the cash rate target by 50bps, reiterating their commitment to return inflation back within their 2-3% target range. Given that this was a gathering with no updated economic projections, they maintained the view that inflation will rise further this year to around 7.25%, slow down to 4% in 2023, and touch the upper end of their target range in 2024.

That said, when testifying before parliament a couple of weeks ago, RBA Governor Philip Lowe said that very soon they will not need to hike by 50bps as interest rates approach their normal setting. Though he added that interest rates are still too low. That’s maybe why market participants are now leaning slightly towards a 25bps rate increase, but they project a higher terminal rate. More specifically, they are assigning around a 52% probability for a quarter-point increase, with the remaining 48% pointing to another double hike. As for the terminal rate, they now see it at 4.3% in June, while ahead of the prior meeting, they saw it at 3.9% in May. 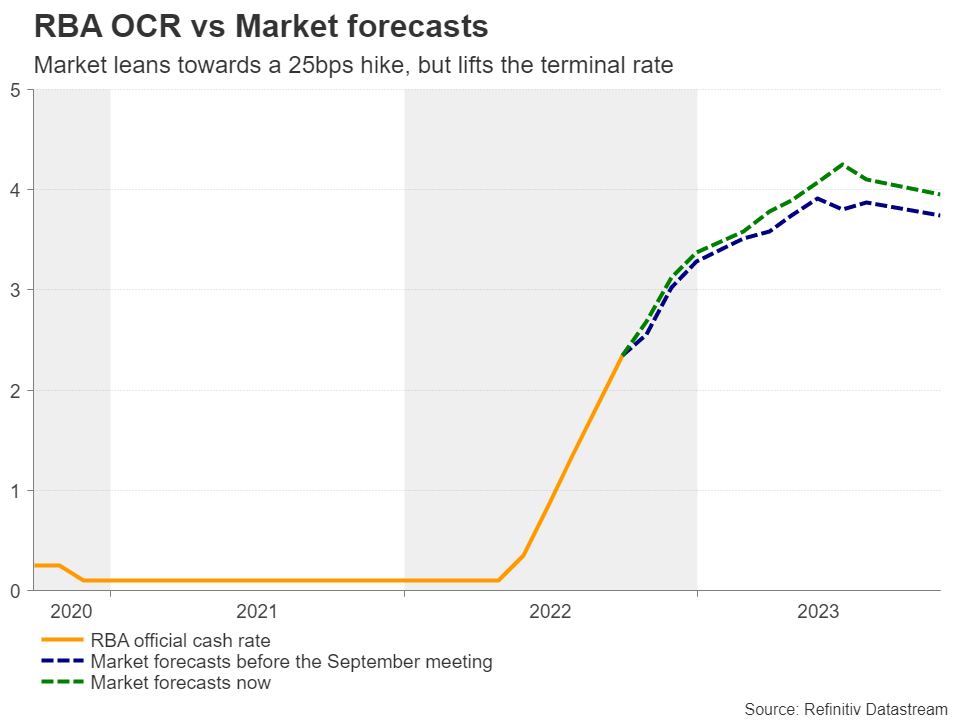 Since then, the only top-tier data released from Australia was the GDP for Q2 and the employment report for August. In contrast with other major economies, economic growth accelerated during that quarter, which combined with the fact that the Chinese economy shrank more than 2% during that same quarter, highlights how resilient the Australian economy is. 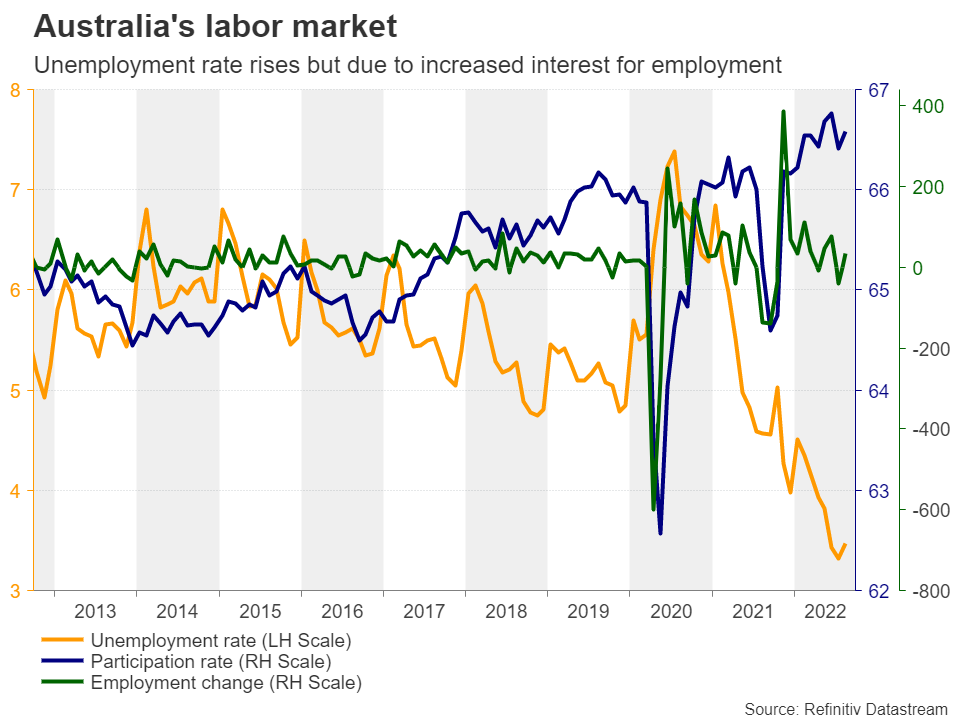 All this, combined with the smaller than expected slowdown in retail sales as well as the rise in the NAB business confidence index, suggests that the chance for another double hike may be bigger than the market pricing suggests. After all, although 1-year inflation expectations have come off their highs – as calculated by the Melbourne Institute – they remain well above the upper end of the RBA’s 2-3% target range. 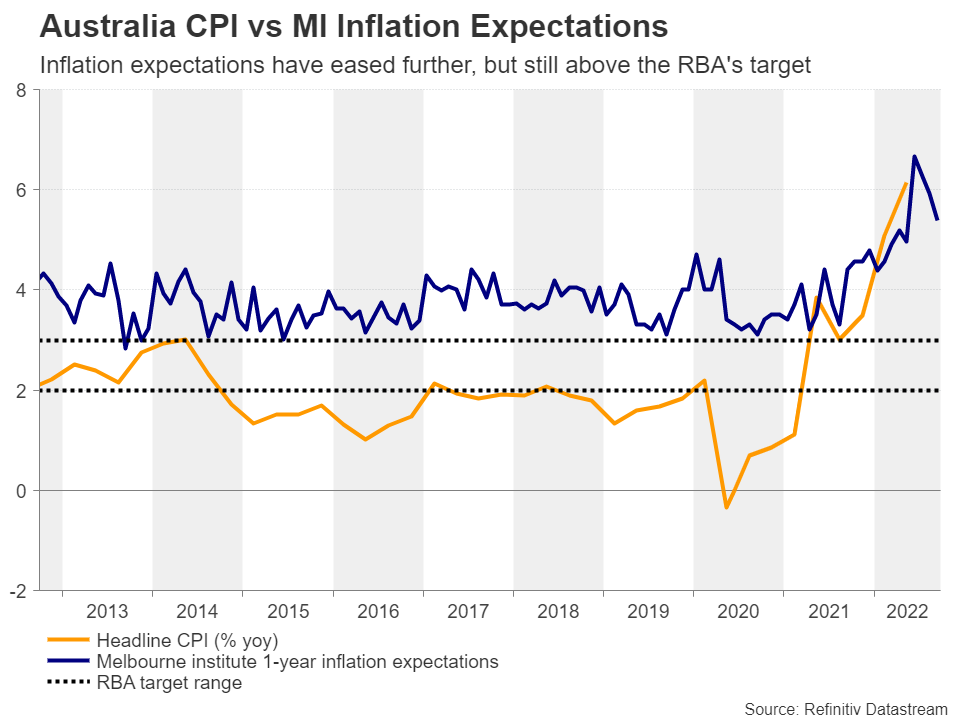 What’s in store for aussie?

Another 50bps hike could support the Australian dollar at the time of the release, and a hawkish language suggesting that they will not slow the pace of rate increases yet, could add extra fuel. On the other hand, a quarter-point liftoff could validate Lowe’s remarks over slower hikes and could push the aussie off the cliff.

Even in the former case though, a potential recovery may not last for long, especially against the US dollar. Due to its risk-linked status, the aussie has been feeling the heat of the deteriorating broader sentiment. While the Australian economy is doing well, expectations over higher interest rates elsewhere have raised concerns over a global recession, pushing the aussie to fourth place among the major currencies in terms of best year-to-date performance. Ahead of the prior meeting, it was holding the third place. 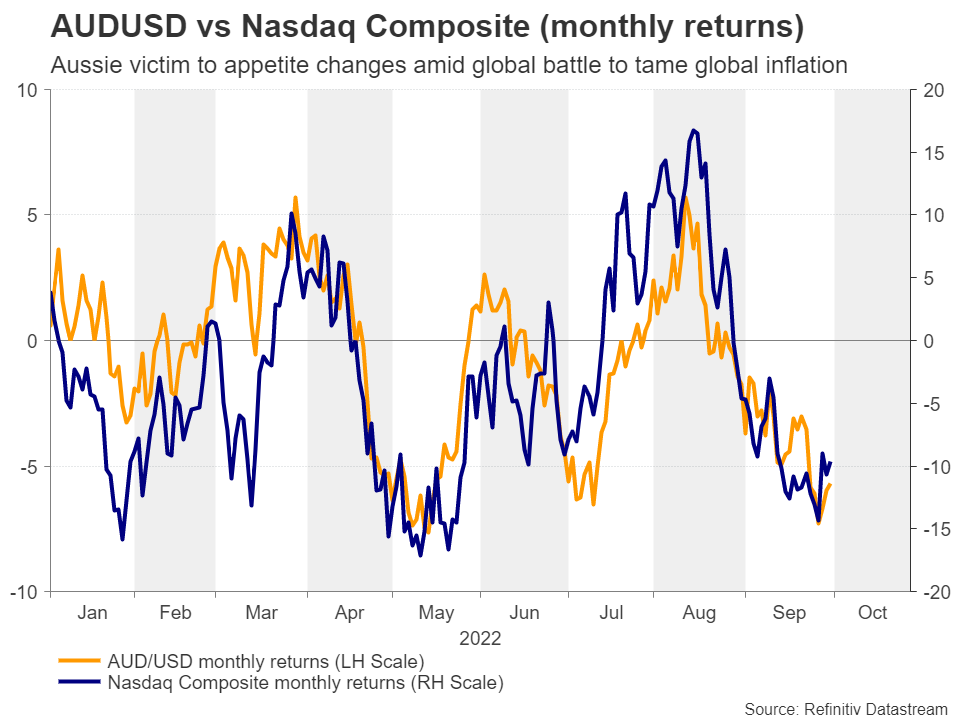 So, rebound or not, aussie/dollar may be destined to come under renewed selling interest soon. A break below Wednesday’s low of 0.6365 would confirm a lower low on the daily chart and take the action into territories last seen in April 2020. The next zone to consider as a support may be the low of April 21 of that year at 0.6250, the break of which could carry larger bearish implications and perhaps encourage the bears to put the round number of 0.6000 on their radars.

For the outlook to change, a break above the high of September 13 at 0.6915 may be needed. This could confirm the break above the downside resistance line drawn from the high of April 5 this year, but for any gains to have the potential for more and sustained extensions, the global market sentiment may have to take a 180-degree spin first.