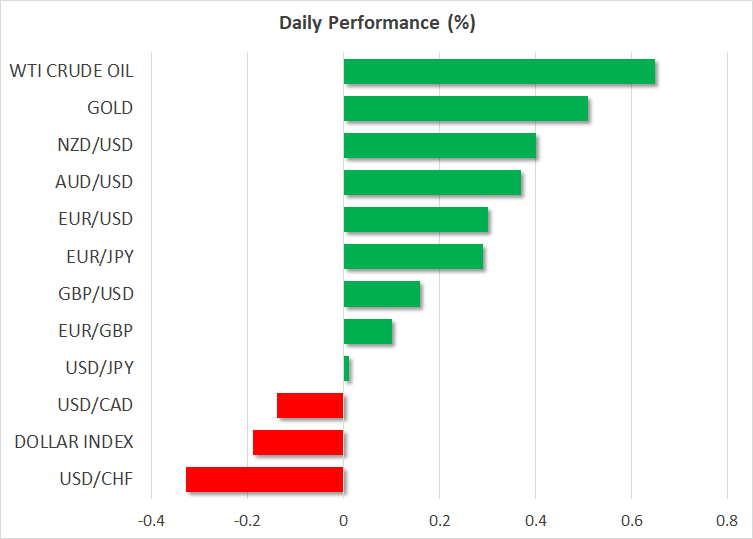 Dollar eases from one-week high ahead of Powell’s speech

The US dollar traded mixed against the other major currencies on Tuesday, while it came under some broader selling pressure today.

The Fed and the market agree that slower rate increases may be warranted henceforth, but they disagree on the path of interest rates after they reach their terminal level. Despite most policymakers pushing back against a pivot, insisting that interest rates will stay high for a while after they reach their peak, investors are still stubbornly pricing in nearly two quarter-point cuts by the end of 2023.

This has resulted in some loosening in financial conditions and thus, Powell is unlikely to add credence to the market’s assumption. After the latest decision, he noted that it is too early to start thinking about pausing, and although this was before data revealed a slowdown in October’s inflation, he could very well highlight the need for further tightening and keeping interest rates high for longer as many of his colleagues have done in the aftermath of the inflation numbers.

The US dollar could strengthen in response to potentially hawkish remarks, but whether this will be a first step towards the resumption of the prevailing uptrend remains a mystery. Market participants kept the greenback in corrective mode and maintained their cut bets even after some Fed members argued otherwise. Thus, the dollar could bounce initially, but if the financial community remains unconvinced about a prolonged pause, another round of selling and an extension of the greenback’s latest downside correction could be possible.

Euro/dollar traders will have the opportunity to adjust their positions before Powell steps up to the rostrum, as the flash estimates of the euro area inflation numbers are scheduled to be released today. Expectations are for the headline rate to have slid to 10.4% y/y from 10.6% but bearing in mind that the German CPI came in lower than expected, the risks may be titled to the downside.

After the German numbers were out, investors reconsidered their bets with regards to the ECB’s December action, now seeing the case of a 50bps hike as slightly more likely than a 75bps increment. A couple of days ago, they were nearly certain that another 75bps hike may be warranted. This likely reflects hopes of a peak in inflation and thus, a larger-than-expected slowdown today could result in a setback in the euro.

Nonetheless, with another inflation rate in the double digits, a core print well above the ECB’s objective, and a PPI rate at unprecedented levels, the ECB is unlikely to let loose in its fight against inflation, as skyrocketing producer prices could be channeled into next months’ consumer prices and result in another acceleration.

Combined with hawkish remarks by Fed Chair Powell later in the day, a larger-than-expected slowdown today could lead to a decent slide in euro/dollar. However, this may not be the end of the prevailing recovery as a potential rebound in euro-area inflation in coming months could well revive speculation for the need of larger hikes by the ECB. This could even happen today in case there is an upside surprise.

Wall Street traded lower on Tuesday, with the interest-rate sensitive Nasdaq losing the most ground, suggesting that equity investors were reluctant to buy ahead of Powell’s speech. A potentially hawkish message by the Fed Chief could result in another round of selling, with a potential break below the key support zone of 3920 in the S&P 500 opening the way towards the low of November 3 at around 3695. However, there would still be a decent way to go before the index hits its two-year low of 3490 and thus, a discussion about the resumption of the prevailing downtrend would remain premature.

After all, investors could well stay unconvinced that the Fed will refrain from cutting interest rates next year even if Powell appears in a hawkish suit, which combined with another retreat in the US dollar in the foreseeable future, could result in another rebound in equities.

Oil prices extended their gains today, driven by expectations for looser COVID controls in China, as well as by the pullback in the greenback. However, the gains could have been larger if it wasn’t for the disappointing Chinese PMIs, which likely added to concerns about the performance of the world’s second largest economy.

Central banks actions - what is the market pricing in for the remainder of 2023?