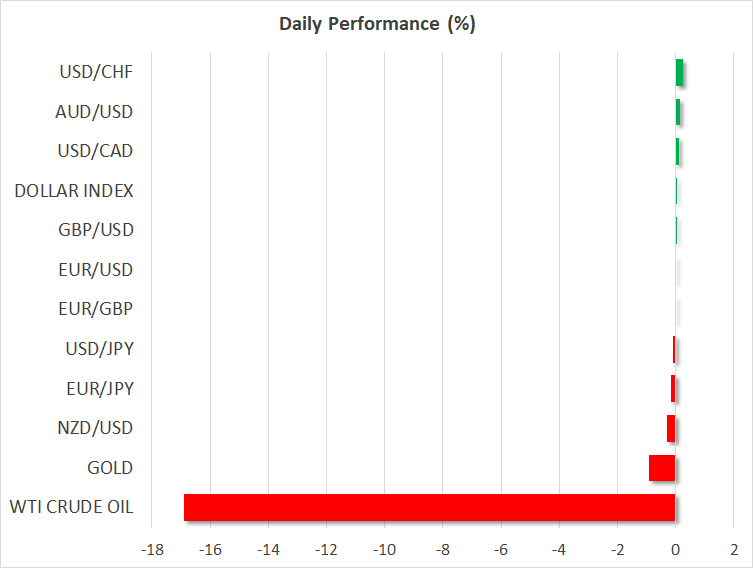 WTI oil futures are on track for a second day of hefty losses as the commodity remains heavily pressured after the biggest oil exchange-traded fund (ETF) yesterday said it plans to sell all its WTI contracts for June delivery. The announcement by the United States Oil Fund to reduce its holdings in the front end of the oil futures curve took markets by surprise and comes when prices had just started to stabilize after an extremely volatile week.

WTI’s losses over the past two days now stand at about 37%, while Brent crude is down a more moderate 12%.

The loss of confidence in the oil market underscores the extent of the collapse in consumption of fuel around the world from the virus shutdowns and raises the question of whether the small steps that some countries are now taking to reopen their economies will be enough to alleviate the severe shortage in storage capacity for oil.

With the recently announced output cuts by major oil-producing countries not going anywhere near far enough to compensate for the slump in demand, it’s more likely that it will be the struggling US shale producers going out of business that help in rebalancing the market than the decision of OPEC and its friends or the baby steps being deployed to end the lockdowns.

Gold on the backfoot amid lockdown optimism; stocks mixed

Gold was also seeing red on Tuesday, extending its slide into a third day and slipping below the $1,700 an ounce level, as risk appetite recovers on expectations that the lockdowns that have paralysed much of the global economy will soon be lifted.

The precious metal had surged to seven-year highs only two weeks ago as fears of economic catastrophe from a prolonged period of shutdowns were heightened. But with the number of new virus cases appearing to have peaked in most of Europe and possibly in the United States as well, many jurisdictions are now moving towards removing some of the restrictions put in place to slow the spread of the virus, allowing some small businesses and factories to open their doors for the first time in weeks.

This optimism has driven US stocks to record their best month in decades as the S&P 500 is on track to end April up more than 11% – the biggest gain since December 1991 – even as investors gear up for big earnings releases from tech giants such as Microsoft, Apple and Amazon in the next few days. However, it was somewhat of a mixed picture on Tuesday in Asia and European and US stock futures were only marginally higher as traders were slightly cautious ahead of key policy meetings this week.

It was relatively quiet in currency markets with the US dollar edging lower as the risk-on mood prodded the pound and the Australian dollar higher. The euro was up too but only slightly, as investors await the European Central Bank’s decision on Thursday on whether additional stimulus is on the way given that the EU has once again failed to live up to its side of the bargain in rescuing the Eurozone economy from the carnage of the COVID-19 pandemic. The FOMC meeting is also on the agenda this week, though no change in policy is anticipated by the Fed.

The loonie was surprisingly steady as signs that Canada could be easing lockdown measures offset the negative impact of the plunge in oil prices. However, the New Zealand dollar bucked the trend to briefly tumble below the key $0.60 level on growing speculation about whether the Reserve Bank of New Zealand will cut rates to negative territory.

Although New Zealand, like Australia, is close to eliminating the virus in the country and some restrictions have started to be removed, the dovish stance of RBNZ Governor Adrian Orr has kept the door wide open to further monetary easing, putting a cap on the kiwi’s rebound from the March lows.