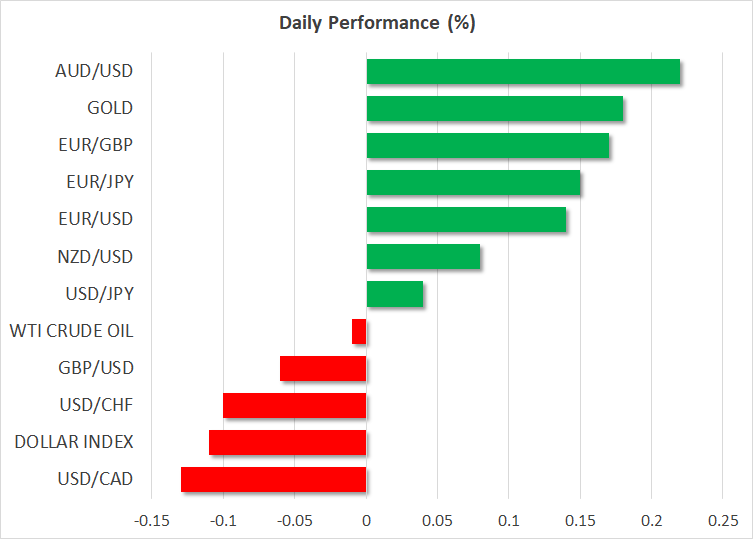 Another big CPI beat, but no fuss this time

Consumer prices in the United States soared by 5.0% in May, beating forecasts of 4.7%, as the lockdown base effect and a number of one-off factors pushed annual inflation to the highest since 2008. Large hikes in the prices of used cars, rental cars, airfares and owners’ equivalent rent were a big component of the stronger-than-expected month-on-month increase in both the headline and core consumer price index that would normally be ringing alarm bells for policymakers.

However, as most of these price hikes are being attributed to supply constraints and other price distortions from the pandemic, investors are increasingly persuaded by the Fed’s argument that the inflation overshoot is temporary and will subside after a few months.

The striking lack of fear about runaway inflation couldn’t be more evident in the Treasury market where the 10-year yield only briefly spiked higher before resuming its slide. It is currently hovering near 3-month lows of around 1.44%.

After a couple of months of highly unpredictable data readings, market volatility has actually declined as investors no longer see a substantial threat of premature policy tightening by the Federal Reserve or the European Central Bank for that matter.

Tapering still not on the menu at the ECB

The ECB on Thursday kept its stimulus settings unchanged, maintaining the “significantly higher pace” of bond purchases it had committed to back in March. President Lagarde dismissed any suggestions that preparations to exit the pandemic emergency purchase programme were already underway, saying it was “too early and premature”. And although the decision to keep buying bonds at an accelerated pace was not unanimous, the fact that only three policymakers were in favour of reducing purchases signalled to the markets that there was no big urge within the Governing Council to start tapering sooner rather than later.

However, when the Fed meets next week, there’s likely to be a clear message that taper discussions will need to start soon and there is a growing consensus that Chair Powell will use the annual Jackson Hole retreat in August to flag a policy shift. But even then, any dialling back of bond purchases is expected to be very gradual, which might explain why there’s yet to be any inkling of a taper tantrum.

Dollar and euro barely budge from ECB and inflation headlines

After both the ECB meeting and US CPI release were shrugged off by the markets, major pairs were left confined to their recent ranges. The US dollar was marginally higher versus a basket of currencies on Friday, firming against the yen, euro and pound. The euro has been tightly bound within the $1.21-$1.22 range over the past week and it will be interesting to see if the Fed will be able to shake things up a little next Wednesday.

The pound has also been edging sideways throughout June and there was little reaction to today’s data showing UK GDP exploded by a record +27.6% year-on-year in April as the economy reopened. Mounting concerns about rising virus infections in the UK, as well as an ongoing spat with the European Union over customs checks with Northern Ireland are a bit of a drag on sterling at the moment.

US stocks set to end week in upbeat mood

In equities, US stock futures were just about in positive territory during early European trading following a record close for the S&P 500 on Thursday. Falling bond yields and easing worries about the inflation surge becoming permanent have been steadily lifting growth stocks on Wall Street in recent days, with the Nasdaq Composite moving closer to its all-time high set in April.

In Europe, all the major indices were last headed higher, and with not much on today’s agenda apart from the G7 summit, it’s looking like it will be a fairly positive end to the week.