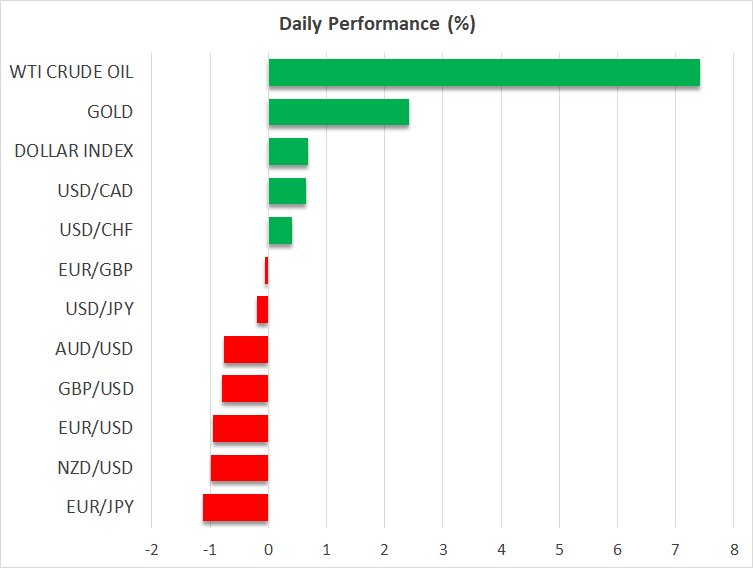 Traders in Europe and around the world woke up to a dark day on Thursday after Russia’s latest actions confirmed the West’s worst fears about Ukraine. Russian President Vladimir Putin has ordered a “special military operation”, targeting military infrastructure in the east of Ukraine, prompting Kyiv to impose martial law.

Although Putin has indicated his aim is not to “occupy” Ukraine, further and more severe sanctions against Russia are likely to follow from the United States and its allies. Even if Russia’s main intention is to demilitarise Ukraine and halt NATO’s expansion into Eastern Europe and the West doesn’t intervene militarily, things could still get very bloody on the ground. This then begs the question of how far the US and Europe would go in punishing Russia.

Markets are already anticipating a greater risk of disruption to Russia’s energy exports, either directly or indirectly from Western sanctions. Oil prices have shot up more than 7% today, with Brent crude futures breaking above $100 a barrel for the first time since August 2014. WTI futures, meanwhile, have crossed above $99 a barrel and could soon hit the $100 mark too.

Natural gas futures soared too, raising alarm in Europe, which is already struggling with skyrocketing fuel bills. But the ripples of war didn’t end there as grain prices jumped as well. Russia and Ukraine are major exporters of grains such as wheat and corn and the escalating conflict poses a threat to the world supply of those commodities.

Concerns about tighter supply from the Ukraine fallout also pushed up the price of some base metals like aluminium and nickel, while in precious metals, gold and silver were more than 3% higher in European trading today.

Gold’s rally briefly lost steam before reaching the significant resistance area around $1,960/oz, but the bulls are now in a clear battle to overcome it.

It was an entirely different picture in equity markets as stocks around the world plunged. European bourses tracked Asian markets to fall deep into the red at the open. Germany’s Xetra DAX crashed below the 14,000 level and the Paris CAC 40 was last quoted 3.4% lower on the day. Energy stocks supported London’s FTSE 100, however, which slipped by a more moderate 2.4%.

US stock futures remained in negative territory following steep losses on Wall Street on Wednesday. The Nasdaq Composite is dangerously close to entering a bear market as tech stocks continue to bear the brunt of the selloff.

In bond markets, sovereign yields dipped across the board, with the 10-year US Treasury yield hitting a low of 1.86%. Nevertheless, although yields are off their peaks from earlier this month, the pullback is modest given the scale of the flight to safety in recent days, as expectations of tighter monetary policy is maintaining upwards pressure.

Dollar and yen in demand, kiwi and euro sink the most

Other than gold, the Japanese yen has been the main winner from the worsening Ukraine crisis, though the US dollar and Swiss franc have seen increased safe-haven traction over the last 24 hours too.

In contrast, the euro’s post-ECB gains have been wiped out. It’s just fallen below the $1.12 level as worries mount about the economic impact of a war in Ukraine on Eurozone members.

There’s been growing hawkish soundbites coming out of the ECB lately, with chief economist Philip Lane being the latest to signal that bond purchases might be wound down sooner than expected.

Fed Governor Mary Daly also appeared to be turning more hawkish in overnight remarks. Investors have been slightly paring back their expectations of rate hikes by the major central banks as the events in Ukraine unfold. However, there is a risk that policymakers might need to act even more decisively than before if the geopolitical tensions exacerbate the surge in energy prices.

But it remains to be seen how much the US dollar would be able to capitalize on Fed rate hike bets potentially getting revived. The dollar index was last up 0.7% as the riskier currencies slumped.

The New Zealand dollar was the day’s worst performer, followed by the euro, aussie and sterling. The loonie’s losses were somewhat kept in check by higher oil prices. But the Russian rouble nosedived to an all-time low of 89.99 to the dollar. 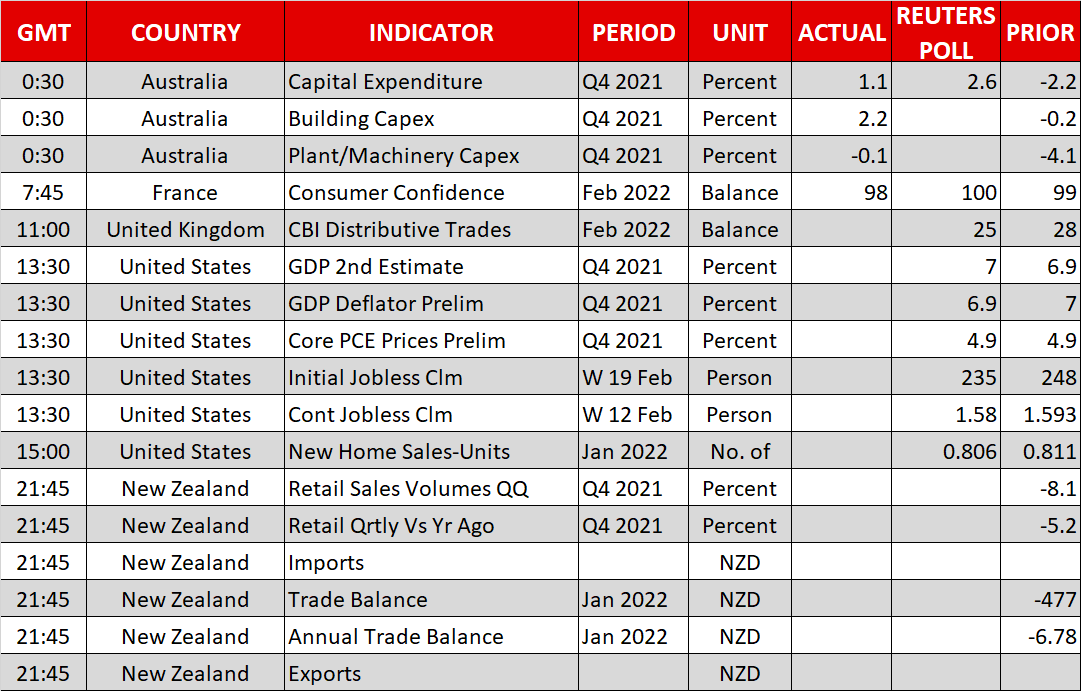