The Walt Disney Company is set to release its second quarter financial results for 2022 on Wednesday, August 10, after Wall Street's closing bell. The leading entertainment giant is expected to post year-on-year revenue growth as Disney theme parks and movie theatres around the world have reached their pre-pandemic traffic levels. However, the real driver for markets will be the subscriber growth metrics of the firm’s streaming services, with Netflix’s better-than-expected subscriber figure in Q2 providing a positive early indication for Disney+.

Disney’s attractions all around the world have been working in full gear since the global economy emerged from the pandemic. Theme parks, hotels, and box office sales have all recovered from their pandemic-induced losses, significantly boosting the company’s revenue and profits. However, the global end of Covid-19 restrictions has proved both a blessing and a curse as Disney’s share has been massively underperforming in 2022 amid increasing fears that the firm’s streaming segment will face significant difficulties to attract new subscribers in a period of reduced demand and intensifying competition. 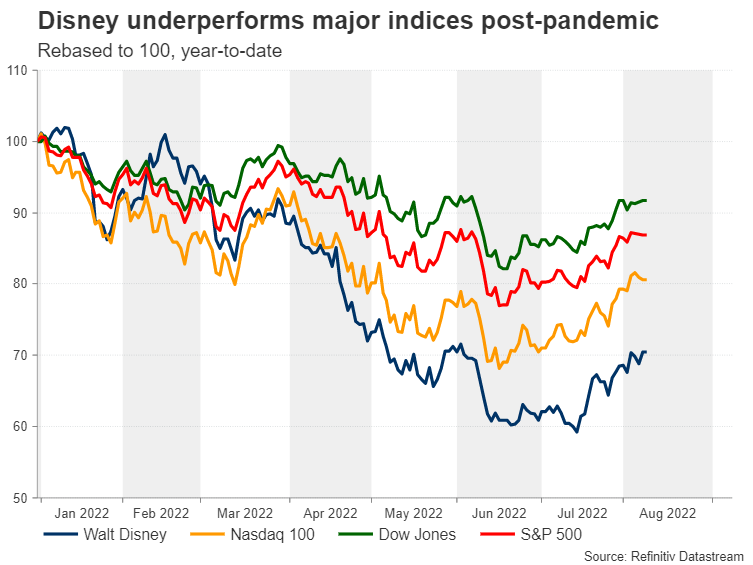 In addition, China’s latest wave of lockdowns has acted as a reminder that the Covid-19 pandemic is not over yet, with Disney losing significant revenue as Shanghai and Hong Kong Disneyland parks remained closed throughout most of the June quarter. Looking into the rest of the year, the management is likely to be cautious on its guidance as consumers are likely to get even more squeezed by inflationary pressures, curtailing their spending on discretionary items like amusement parks and leisure trips.

Meanwhile, there are also idiosyncratic risks on the table. The company lost its special tax status after Florida Governor Ron DeSantis said he would “fight back” against the company for its criticism of a Florida law that limits what educators can discuss about sexual orientation. This has dealt an immense blow on Disney, pushing its prices higher and narrowing its profit margins.

It's all about streaming

The fact that Disney’s share price has fallen dramatically despite the rebound in its on-site facilities clearly indicates that markets seem to be more focused on the firm’s streaming segment performance. Hence, in the upcoming earnings release subscriber growth will once again take center stage, with investors looking for 10.45 million additional net subscriptions in the quarter. The loss of streaming rights to the IPL in India could cause Disney to post a weaker-than-expected reading that could in turn inflict more pain on the company’s share price, but it is not expected to derail Disney+ long-term prospects due to its deep pool of content.The streaming sector has demonstrated both sides of the coin in this earnings season. On the one hand, Netflix reported a better-than-anticipated subscriber figure, whereas Roku delivered a massively disappointing performance, missing on subscriber growth and revenue projections. Nevertheless, even if Disney follows the latter’s path, this comparison seems naïve considering that Disney has a more diversified business plan than its streaming competitors, while its alternative segments appear to have completely recovered from their pandemic-driven slump.Solid performance despite rising risksDisney is expected to report strong financials due to the full reopening of its amusement parks and theatres, alongside the increasing adoption of Disney+. The world's leading entertainment conglomerate is expected to post revenue of $20.96 billion for the second quarter, according to consensus estimates by Refinitiv IBES, which would represent a year-on-year growth of 23.13%. Additionally, earnings per share (EPS) are estimated to decrease from $1.08 in the previous quarter to $0.97, but increase 21% on an annual basisValuation remains high despite sell-off

Although Disney is anticipated to face macroeconomic risks due to the combination of monetary tightening and persistently high inflation, investors and markets appear confident that it can achieve its growth targets. This optimistic outlook is also reflected in its hefty forward price to earnings ratio of 21.3, which is substantially higher than its sector’s average of 9.1. This number denotes the dollar amount someone would need to invest to receive back one dollar in annual earnings – the higher it is, the more 'expensive' the stock. 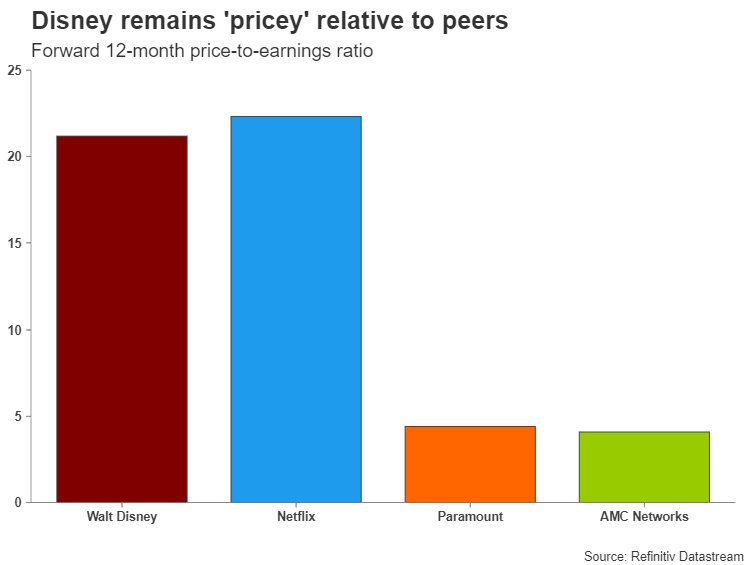 Is the stock price in recovery mode?

Disney's share price has been in a sustained downtrend since the beginning of the year, but lately it is exhibiting some signs of recovery. Hence, on Wednesday, the second quarter’s earnings release could potentially enable the stock to extend its recent rebound and shift its short-term picture to bullish.

In the positive scenario, solid financials could propel the price towards the recent high of $113. Successfully breaching this region, the price might then test the $129 barrier.

On the flipside, the bears might aim for $101, which overlaps with the 50-day simple moving average (SMA). A violation of this region would turn the spotlight to the 2022 bottom of $90.