Early on Wednesday at 02:00 GMT the Reserve Bank of New Zealand will begin its monetary policy meeting and it could be significant as it is expected to raise interest rates again. The New Zealand dollar is in a positive mode and the next step is to wait-and-see the reaction of the pair on a new rate hike.Will RBNZ hike rates again?

It is anticipated that the Reserve Bank would increase the Official Cash Rate by an additional 50 basis points to 2.0%. There is also an expectation to provide a clear signal that further tightening is forthcoming. The RBNZ has determined that more decisive action early on will prevent the need for an even more excruciating interest rate peak in the future. This pushed them to hike the cash rate by 50 basis points in April, paving the way for future significant increases. 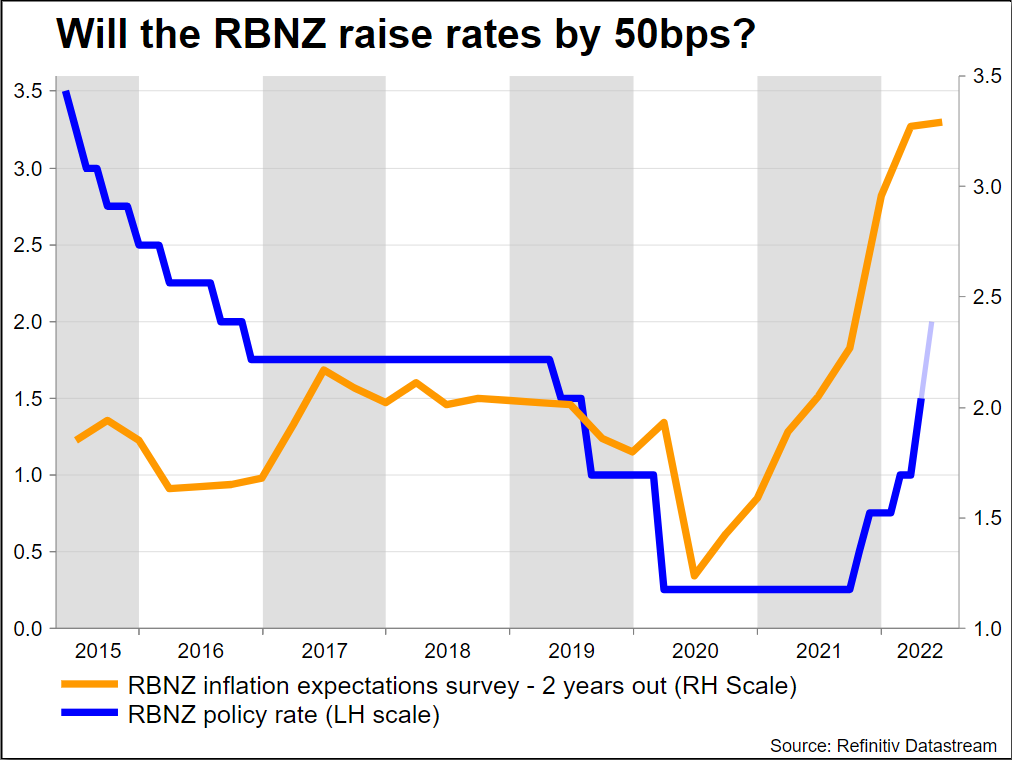 The bank raised interest rates for the fourth time in a row because of rising inflation. A rise in the OCR now, rather than later, will help prevent inflationary expectations from soaring in the first of half of 2022, the board said, citing a forecast of an annual CPI increase of roughly 7%. Policymakers said they'll keep an eye out for signs that high prices for consumers are becoming ingrained in people's long-term expectations. COVID-19-related supply concerns are continuing to raise inflationary pressures around the world. Commodities and energy costs have increased as a result of Russia's invasion of Ukraine. It was pointed out by the board that the OCR is now stimulating. On the subject of property prices, they have decreased from their previous peak and are now at a more sustainable level.

RBNZ’s predictions for next months

As evidence of declining demand grows, the expectation is for the RBNZ to return to its more normal pace of 25bp rate increases beginning in July. However, if inflation continues to surprise on the upside, a second 50-pointer in July is not out of the question.

The RBNZ's expectations for New Zealand's economic data have been met although global news is still very unpredictable. However, there are several strong reasons to go on another 'big' hike. At 6.9%, CPI inflation is clearly out of control, but the OCR is still stimulating the economy at 1.5%. Core measures have risen, with the RBNZ's sectoral factor model reaching a record high of 4.2% in Q1. Inflation printed at 6.0%, close to 6.1% of the RBNZ's projection. One-year inflation predictions continued to rise, reaching 4.9%, while two-year inflation forecasts appeared to level off at little under 3.3%. Therefore, it is possible that officials will hint at a slower rate of rate hikes following the May meeting.

There were stronger wage increases in Q1 than projected. Instead of next year, the forecast is for more positive wage growth in the second half of this year. This will ease the pinch on households' budgets a little sooner, but it will do nothing to allay RBNZ's concerns about an upward spiral in prices and wages.

Even if the RBNZ has hinted at another 50 bps, the New Zealand dollar is likely to appreciate at first should they happen. From a technical perspective, the outlook for kiwi/dollar is currently positive in the very short-term. The pair is advancing above the 20-day simple moving average (SMA) after the rebound off the two-year low of 0.6214. The next resistance could come from the 0.6570 barrier and the 40-day SMA at 0.6610.

Alternatively, the pair will need to tumble below the 20-day SMA to generate more losses until the 0.6214 low. Even lower, the price would endorse the negative structure in the medium-term, meeting 0.5920, taken from the troughs on May 2020. 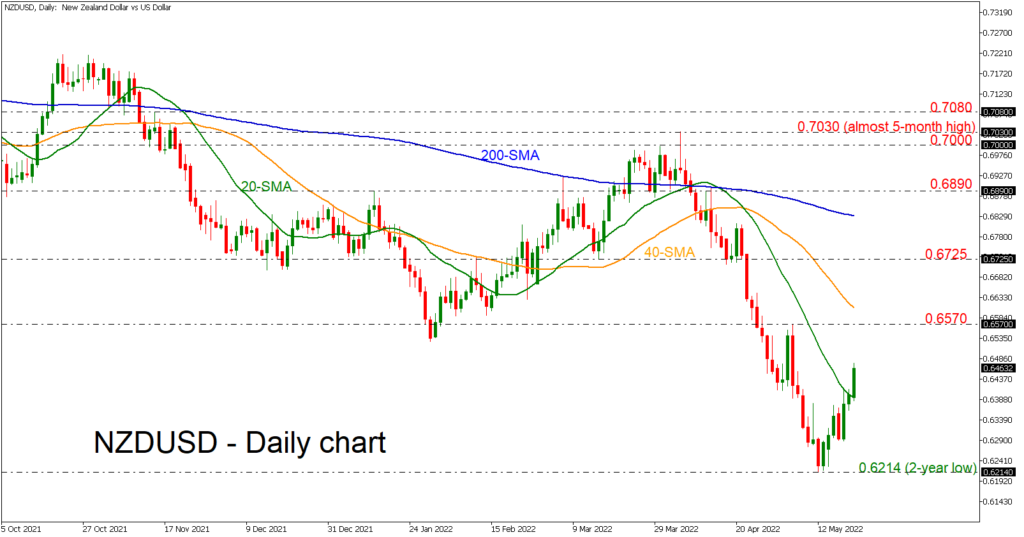 Technical Analysis – Gold raises a bullish flag, but how strong are the bulls?