As we are approaching the midway point of 2022, investors are assessing the performance of their stock portfolios in a year in which macroeconomic conditions have proved to be extremely unfavorable for risky assets. So far, mounting inflation, aggressive monetary tightening and increasing concerns over a global recession have dented investors’ risk appetite. This has led to a persistent sell-off in equity markets, with the S&P 500 and Nasdaq 100 both entering bear market territory. Therefore, investors are now trying to anticipate the severe challenges that lie ahead in order to protect their portfolios from suffering more losses.

The idea of hot and sticky inflation combined with rising interest rates continues to rattle the markets going forward into 2022. Hence, concrete signs that upward pressures in prices have indeed peaked could enable central banks to scale down their monetary tightening and perform a ‘soft landing’, helping risky assets to breathe a sigh of relief.

The Fed and other major central banks have stated that they are ‘strongly committed’ to bringing inflation under control, acknowledging that aggressive policies could eventually lead to a recession. At this point, it has become clear that the only way that economies could avoid entering a recessionary period is for inflationary pressures to subside promptly as central banks would not hesitate to tighten their policies in the eyes of slowing growth.

In 2022, markets have been grappling with the possibility of a recession coupled with persistently high inflation but recently another issue has emerged. Specifically, there are growing concerns that US corporate profit margins are continuously getting squeezed by soaring inflation, the stronger dollar and rising interest rates, deteriorating the already gloomy outlook in stock markets.

Although Q2 profit and revenue growth forecasts have been revised lower in recent weeks, estimates for Q3 and Q4 of 2022 have held up or risen according to IBES data, without any developments or positive news backing these modifications. Failing to meet earnings expectations could spell more trouble into an already battered stock market.

Commodity prices and especially oil prices have been edging higher since the beginning of 2022 due to a wide range of reasons, allowing the S&P 500 energy sector to outperform broader markets and be the only gaining sector so far in the year. However, the rally in commodity prices ceased after the latest hotter-than-expected US CPI print triggered bets that the Fed would be eventually forced to slam the brakes harder on the US economy. 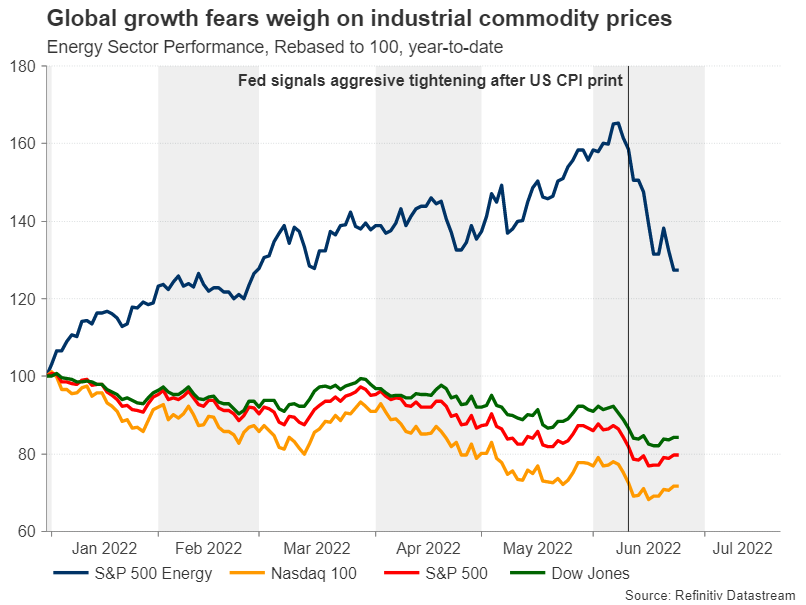 Up until now, markets were bullish on energy stocks but bearish on broader equity markets based on the belief that monetary tightening would not have a severe impact on the growth outlook. This latest development could be proof that commodity prices now act as a sentiment proxy for investors, with the declining prices probably hinting that there are increasing concerns over a recession.