It’s going to be a full-on week for economic indicators with a barrage of data due that should keep the guessing game going on how much central banks will tighten this year. Australia and the UK report jobs numbers, the latter will also release CPI readings along with Canada and Japan. Retail sales will be watched in the UK and US, as well as in China, while the Q1 GDP estimate will be important in Japan.China slowdown fears will likely intensify

The week will kick off with the monthly dump of data out of China, which might attract more attention than usual this time as the lockdown measures introduced in March in the country’s largest city – Shanghai – have yet to be lifted. Moreover, the shutdowns have now spread to Beijing and the government does not seem to be ready to abandon its zero-Covid policy that many see as unsustainable.

With growth prospects fading fast, investors are increasingly concerned that a sharp slowdown in China will drag on growth in the rest of the world where interest rates are on the rise and consumers are feeling the pinch of higher living costs. According to the forecasts, next week’s releases will only add to the gloom.

Industrial output growth is expected to have been near stagnant in April, cooling from 5.0% year-on-year in March to just 0.4% y/y. More worryingly, consumer spending likely slumped in April as retail sales are projected to have fallen by 6.1% y/y. The only bright spot is fixed asset investment, which is expected to have held up at a relatively healthier reading of 7.0% y/y between January and April. 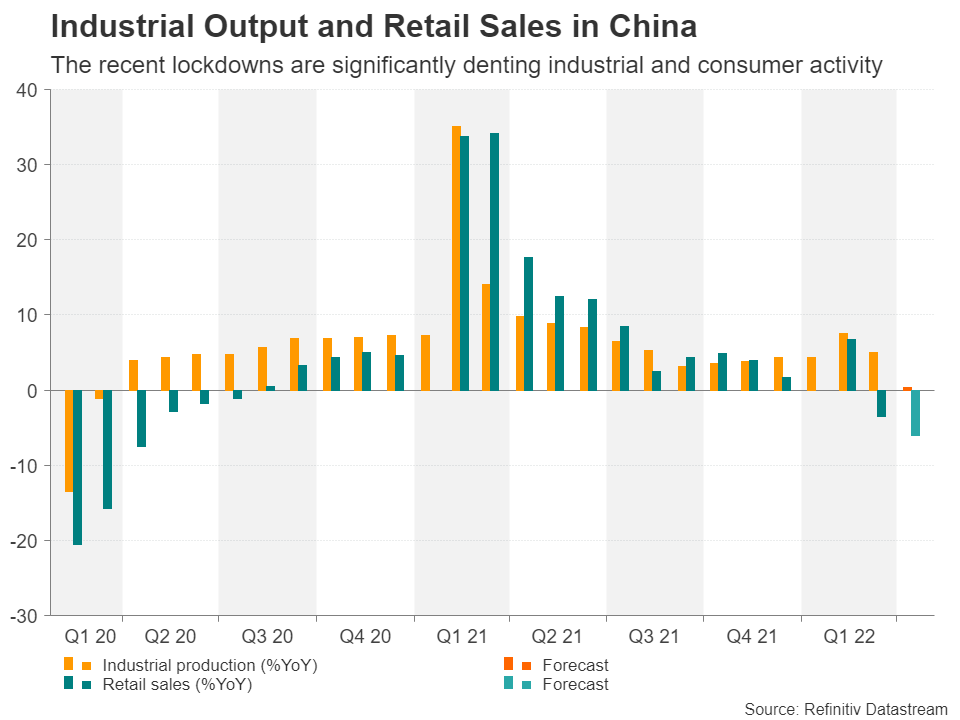 On the plus side, however, a poor set of figures could prompt the People’s Bank of China to cut its key loan prime rates (LPR) when it meets on Friday. The Bank had last reduced its one- and five-year LPRs in January and generally prefers to boost lending using a combination of other tools so another cut might not be on the cards so soon.

Elections and jobs on the aussie’s radar

Doubts about China have taken a toll on the Australian dollar as a weaker Chinese economy would be bad news for Australian exporters of resources. However, domestic data might be more supportive of the aussie.

Australia's employment report for April is out on Thursday and a day earlier, the wage price index for the first quarter will be scrutinized for any signs that the tight jobs market is pushing up labour costs. 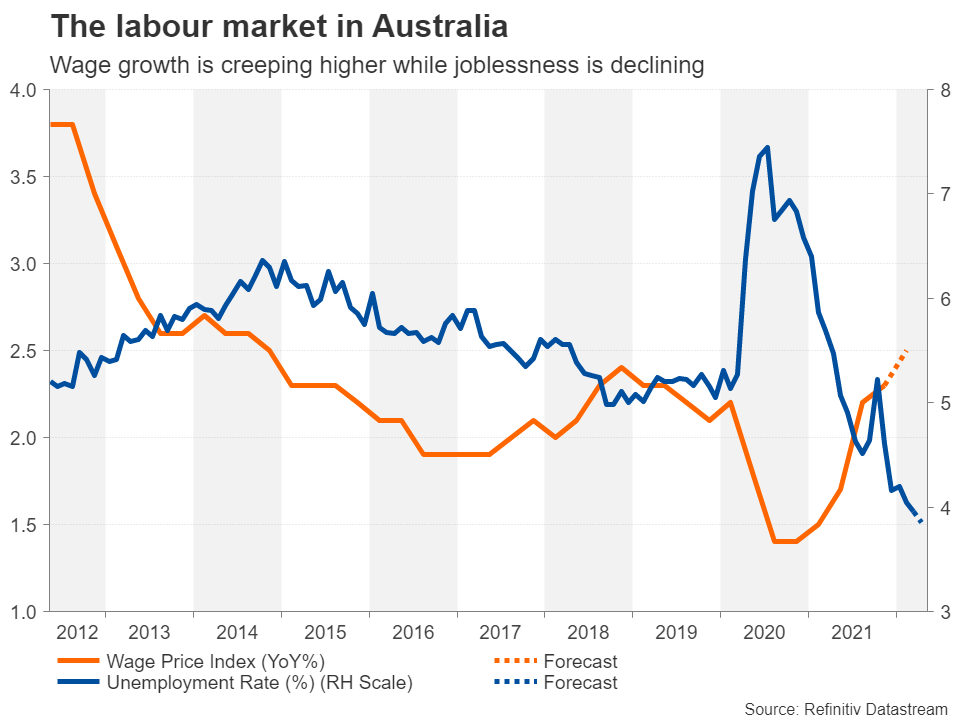 The RBA surprised many last week when it raised its cash rate by 25 basis points instead of 15 bps so strong jobs numbers could fuel speculation of another aggressive hike at the next meeting in June. But before then, there is the tiny detail of the federal election on May 21 that traders will be keeping an eye on.

The opposition Labor party has recently widened its lead with the ruling Liberal-National coalition in the polls. Labor has said it would not repeal the final stage of the coalition government’s tax cuts that are targeted at the wealthy and due to take effect in 2024, while the jump in inflation that is pressuring disposable incomes is likely hurting incumbent Prime Minister Scott Morrison’s popularity.

Yet, with not a lot separating the two parties when it comes to economic policies, the widening gap in polls may not be such a bad thing as it would at least prevent a hung parliament, which is probably the worst outcome for the aussie.

Across the Tasman Sea, the New Zealand dollar will mostly be taking its cues from the global risk tone, though the 2022 budget set to be unveiled on Thursday might also spur some reaction for the kiwi as the government might seek to rein in spending.

Pound may not find much love from UK data

The pound has taken quite a bashing over the last month, with its year-to-date losses versus the US dollar approaching 10%. Its woes deepened after GDP numbers showed that the UK economy contracted in March, in what could be the start of a major downturn. Investors will get another chance to gauge the health of the economy next week when employment, inflation and retail sales figures are due on Tuesday, Wednesday and Friday, respectively.

The consumer price index probably soared to 9.1% y/y in April as higher energy prices took effect for many households, likely adding pressure on the Bank of England to do more to contain the inflationary buildup. The BoE is worried about tightening too fast amidst the weakening economic backdrop. The April retail sales report should reveal how severe the squeeze on consumers was as wage growth has been unable to keep up with the pace of inflation, and now there are signs that hiring could be slowing too. 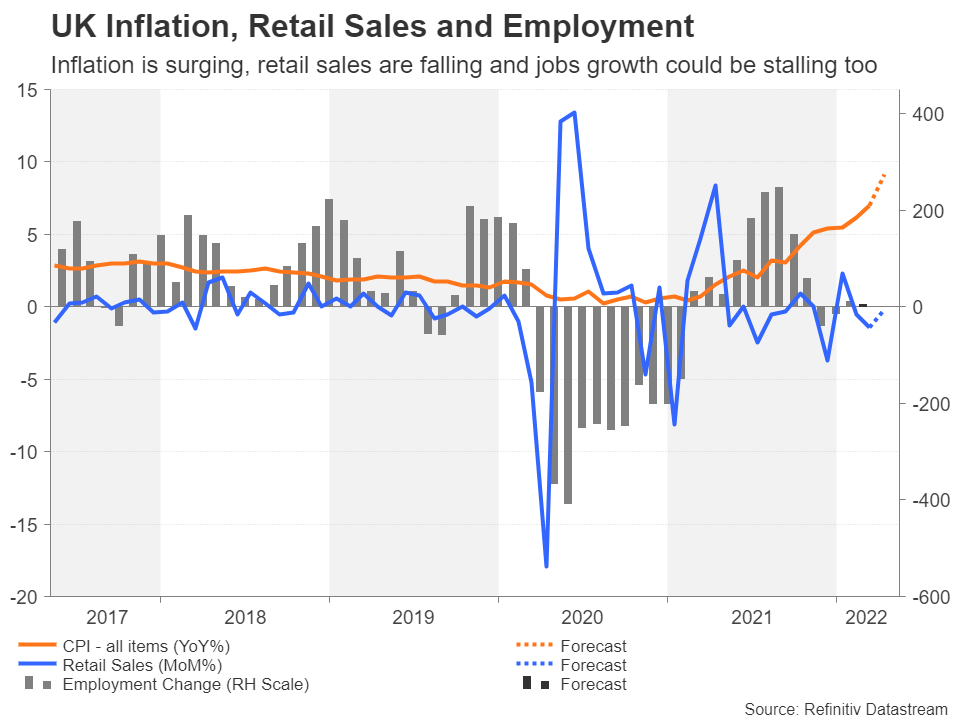 Another headache for sterling is the escalation in tensions between London and Brussels over Northern Ireland. The UK government is unhappy about the lack of progress in the talks aimed at improving the Northern Ireland protocol and is threatening to ditch border checks over the Irish Sea as required by the Brexit treaty. Unilateral action by the UK risks the EU suspending the Brexit trade deal in retaliation.

Inflation will be in focus in Canada and Japan too. Canada’s 12-month CPI rate hit 6.7% in March and the Bank of Canada was one of the first to join the 50-bps bandwagon. Another strong print on Wednesday for April would reinforce expectations that the BoC would again hike by 50 bps at its next meeting. Although this may not provide much of a boost to the Canadian dollar, which has fallen victim to the risk-off flows.

The Bank of Japan is one of the few central banks that can claim inflation has yet to overshoot the universally accepted 2% target. However, that could all change on Friday when core CPI is forecast to have jumped from just 0.8% to 2.1% y/y in April.

Prior to the CPI report, the GDP estimate for Q1 will be released on Wednesday. Japan’s economy is expected to have shrunk in the first quarter when business activity was curbed by the Omicron outbreak. Other data will include wholesale prices on Monday, as well as trade figures and machinery orders on Thursday.

The yen has benefited from the increased demand for safe havens when markets turned jittery during May on the dimming outlook for growth and fears of high inflation persisting for far longer than what is currently anticipated.

US retail sales to be dollar’s primary focus

Finally in the United States, the highlight will be the retail sales numbers out on Tuesday. Retail sales growth is forecast to have quickened 0.9% month-on-month in April. Industrial output data are due the same day and a solid print of 0.4% m/m is expected. If confirmed, they would help alleviate concerns about a slowdown in the US economy and keep the Fed on track to hike rates by 50 bps several more times this year. 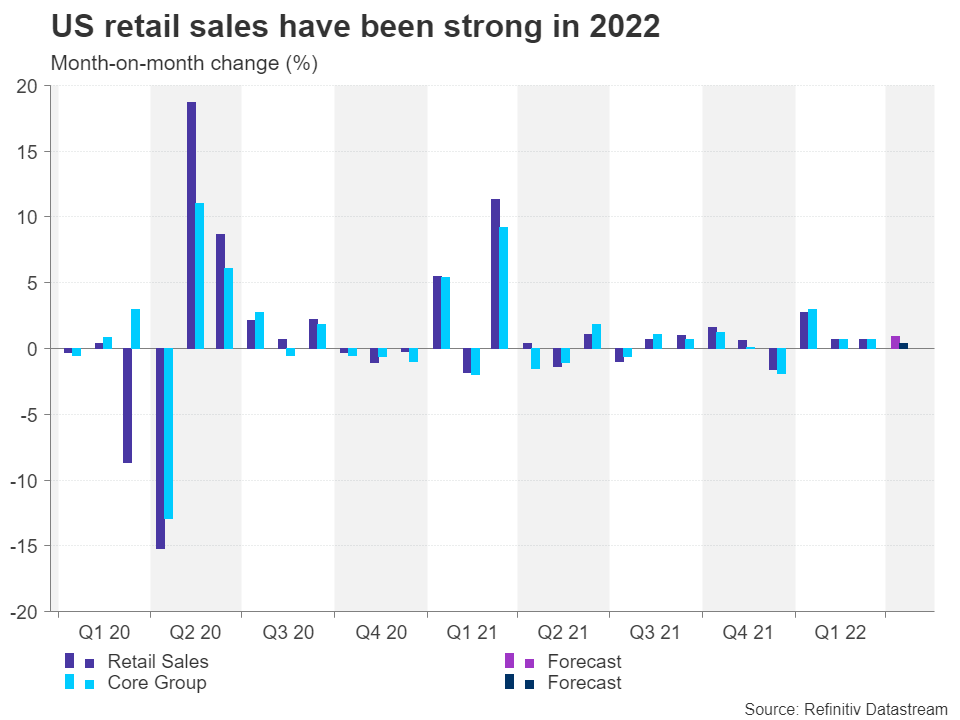 However, amidst the warnings of a correction in America’s housing market, the latest housing starts and building permits (both out on Wednesday), and existing home sales (Friday) will also be of interest for investors.

Regional Fed manufacturing surveys will be watched too; the New York Fed’s Empire State manufacturing index is up first on Monday and the Philly Fed’s equivalent gauge follows on Thursday.

The dollar is likely to draw further bullish support if there are no troubling trends in the US economic barometers that are scheduled for the next seven days. Although, regardless of any surprises in the upcoming data or any fresh panic episodes in the markets, a small pullback is looking overdue for the greenback after the recent strong gains.