It will be hard for the US dollar to escape the spotlight in the coming week as the November jobs report will likely further fuel expectations of faster Fed tapering, extending the rally. The last month of the year is expected to get off to a busy start with a slew of data on the way. Aside from the US highlights, Canada will also be reporting jobs numbers in addition to its Q3 GDP print, Australia will publish growth figures too, while the Eurozone’s flash inflation readings might give the euro a much-needed reprieve.Australian economy likely shrunk in Q3

The weight of the recent lockdowns will be on full display in Australia’s GDP estimate for the quarter ending in October on Wednesday. The data will be preceded by quarterly business inventories and net exports contribution on Monday and Tuesday, respectively. Strong demand for Australia’s resources exports is expected to have lessened the overall hit to the economy from the Covid shutdowns, which are anticipated to have substantially dented consumption and the construction sector. 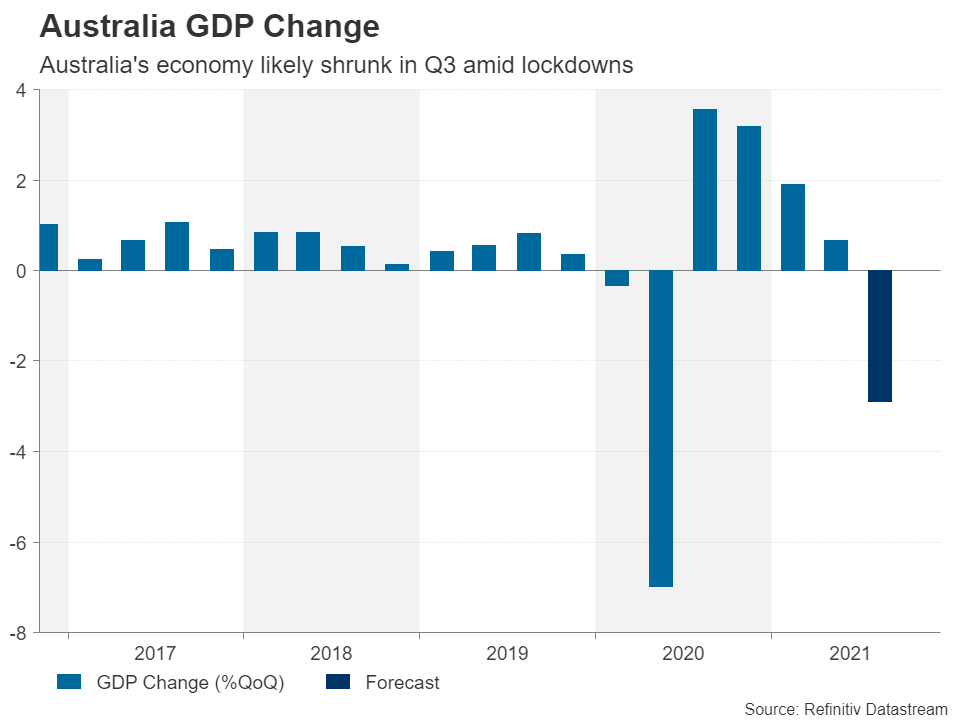 With investors pricing in almost four rate hikes in 2022, better-than-expected growth numbers would support the view that the Reserve Bank of Australia will begin raising rates before its own guidance of 2023 at the earliest.

However, although any changes to the rate outlook would probably not be very significant, it might be the perfect excuse the aussie bulls need to step in and rescue the local dollar from the multi-week lows plumbed against its US rival.

But while there is scope for an upside surprise in the GDP figure, China’s manufacturing PMIs on Tuesday and Thursday pose more of a downside risk for the aussie. China’s economy is cooling and any fresh evidence that the slowdown is accelerating could hurt risk appetite, causing more pain for the aussie.

The Canadian dollar hasn’t been spared from the greenback’s ruthless assault even though the outlook for the Canadian economy remains quite rosy. Growing expectations that the Federal Reserve will not only begin to lift rates sooner but by more times are superseding investors’ similarly aggressive pricing for Bank of Canada tightening in 2022.

The raging speculation as to which central bank will raise rates the most will almost certainly not be easing next week as employment data are due in both Canada and the US.

In addition, investors will get the chance on Friday to see how strongly Canada’s economy rebounded in the third quarter, having contracted in the June quarter when much of the country was in lockdown.

Solid GDP numbers on Tuesday and a further big jump in employment in October could see the BoC making another hawkish turn at its December 8 policy meeting, potentially boosting the loonie.

But the oil-linked currency will also be keeping an eye on the upcoming gathering of major oil producers.

Will it be payback time for OPEC?

White House-led efforts to alleviate the global energy crisis ended in disaster after the coordinated move by the US and several other big nations to release some of their strategic oil reserves did little to drive oil prices lower. Oil futures are on track to finish the week lower, but only because of the fears about the new and potentially very dangerous strain of Covid-19 that could weigh on demand if it spreads. 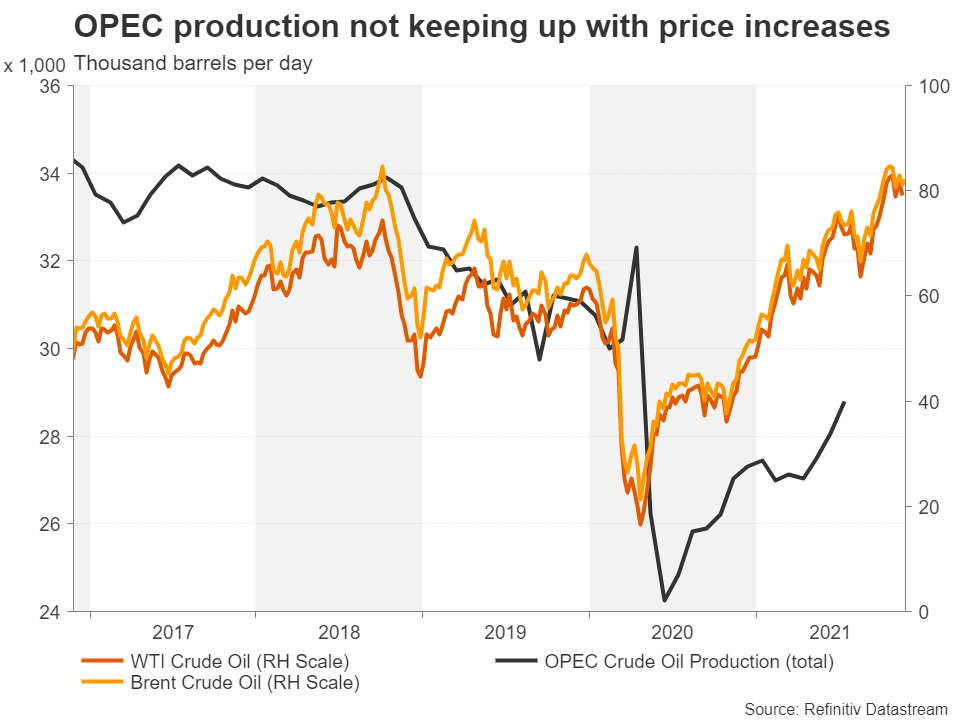 The question now is, will OPEC and its allies punish the US and its partners in crime for taking matters into their own hands? Probably not. Although, this does reduce the odds of OPEC+ countries accelerating the pace at which they undo the 2020 supply cuts in the coming months.

As for next week’s meeting (OPEC members meet on December 1 and the OPEC+ pact on December 2), the likely outcome is that they will stick with the plan of monthly increases of 400,000 barrels a day. However, there may be some clues as to which direction production might be headed in 2022, and this could be a key driver for the loonie next week.

It’s been a bumpy year for the US labour market despite the overall positive trajectory. But last month’s robust gain of 531k in nonfarm payrolls reassured investors and the Fed that it’s only a matter of time before the jobs market fully heals from the pandemic. Analysts are anticipating that November was another good month for job creation, with forecasts currently running at 563k. This would lower the unemployment rate down a tick to 4.5%, while pushing up yearly average earnings growth to 5.0%. 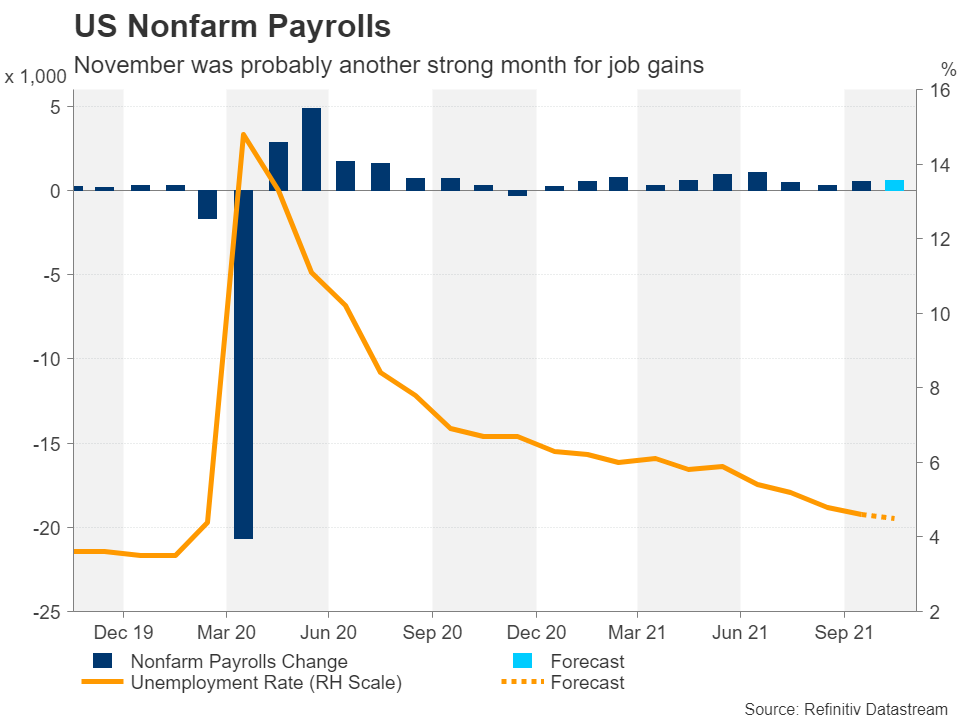 If Friday’s jobs figures are in line or better than the projections, it would strengthen expectations that the Fed will speed up tapering, perhaps as early as the December meeting. Also important will be the ISM PMI reports. The manufacturing PMI is out on Wednesday, to be followed by the non-manufacturing composite on Friday.

In other US data, pending home sales are due on Monday, the consumer confidence index and the Chicago PMI on Tuesday, and factory orders on Friday.

A broadly upbeat set of data would add fuel to the dollar’s upward charge, as currently, it is only the US where the economic outlook is as bullish as the rate hike expectations. This of course implies that other majors stand little chance of clawing back some losses.

The main risk for the greenback over the next few days is if Jerome Powell talks down speculation of a quicker exit from QE when he testifies before the Senate Banking Committee on Tuesday. The Fed chief will be answering questions from lawmakers alongside Treasury Secretary Janet Yellen and may drop some hints as to whether he is leaning towards such a policy shift like many of his colleagues are. The discovery of the new Covid mutation could prompt Powell to err on the side of caution.

Inflation in the Eurozone could rise to the highest since 1991 in November. The flash estimates are out on Tuesday and are forecast to show the headline number picking up to 4.4% year-on-year. Before the recent worsening of the virus picture across the EU, such an increase would have bolstered the case for a rate hike. However, with Germany possibly joining Austria soon in going into a nationwide lockdown, the European Central Bank will likely wait and see whether the transitory effects on inflation will fade on their own accord. 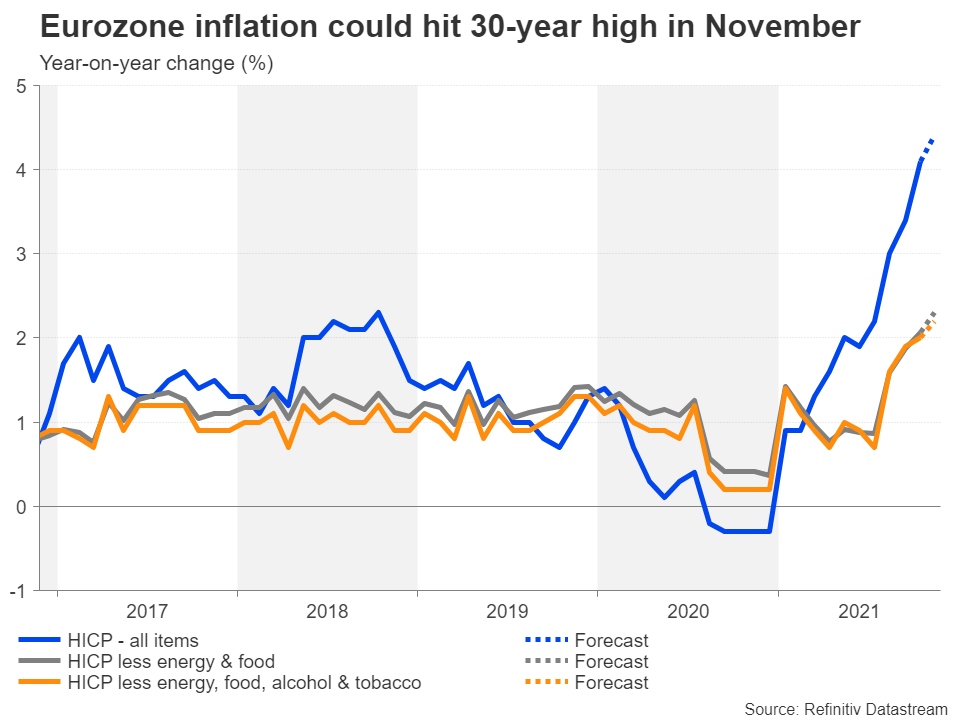 Hence, the euro’s best bet for a near-term rebound is if there is a pullback in the dollar.

Aside from the flash inflation numbers, the economic sentiment indicator for November on Monday, the final PMI readings on Thursday and retail sales on Friday might also attract some attention for the euro.

Elsewhere, the final PMIs for November will also be doing the rounds in the UK, retail sales and industrial production data will be watched in Japan on Monday and Tuesday, respectively, while in New Zealand, the NBNZ business outlook survey on Tuesday and Q3 terms of trade figures might spur some volatility in the kiwi.