BMW will unveil its earnings results for the third quarter on Wednesday before the market opens. The German luxury carmaker is expected to record a slight decrease in year-over-year revenue as the increasing chip shortages are hampering output. However, despite the uncertainty, BMW and the German automobile sector have been standout performers against the broader market. The company’s share price has appreciated by 22% since the beginning of the year, compared to the 14% increase of the DAX index. This outperformance can be attributed to the extremely low valuations of the auto sector after the coronavirus outbreak. Chip shortages hurt car sales

Based on data from the auto industry association, German car output is currently 35% below 2019 levels. This is attributed to the semiconductor scarcity, which has intensified during the past few months weighing on BMW sales. Although the company has not been affected as heavily as some of its peers because of its strong relationship with suppliers, BMW expects to produce 70,000 to 90,000 fewer units than it could have for the 2021 fiscal year. 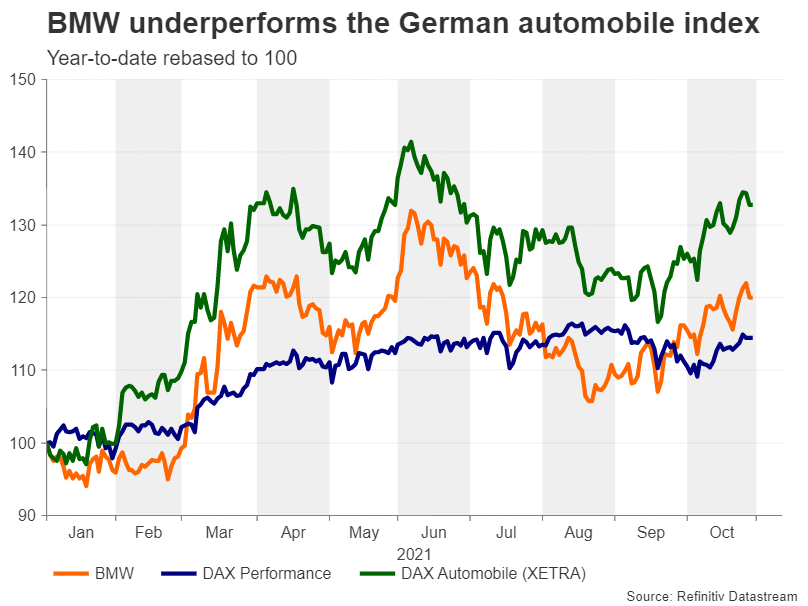 Besides the semiconductor bottleneck, the ongoing surge in raw material prices is posing another threat for car makers. BMW has up to now mitigated the risk of raw material price fluctuations by concluding long-term supply agreements and holding €1bn worth of derivative contracts. However, as the company tries to find ways around those roadblocks, a new supply chain challenge is emerging from the rapidly depleting supplies of magnesium combined with its limited output from China.

Looking beyond the ongoing challenges

BMW is currently developing its sixth generation electric driving, anticipated to come around 2025 and significantly increase driving range and energy intensity, while reducing costs. The company has also a strong foothold in hydrogen-powered cars, giving it a diversification advantage over its competitors, which are solely focused on electric cars.

In addition, the company has recently backed the electric vehicle (EV) start-up ONE, which is developing an advanced electric battery that could double the current electric vehicle range. Investment in another start-up, Lilac, which aims to develop a faster and cheaper way of extracting lithium, could boost the material’s global production amid growing demand from the EV market.

According to Refinitiv estimates, analysts are targeting €25.86 billion revenue and €3.5 in earnings per share (EPS) for the third quarter, marking a -1.62% and 29.11% year-over-year growth, respectively. Moreover, BMW lifted the target range for its EBIT margin expectations on its automaking segment in September to 9.5% to 10%, and boosted its forecast range on Return on Equity (RoE) for its financial services segment to 20% to 23% for the 2021 fiscal year. 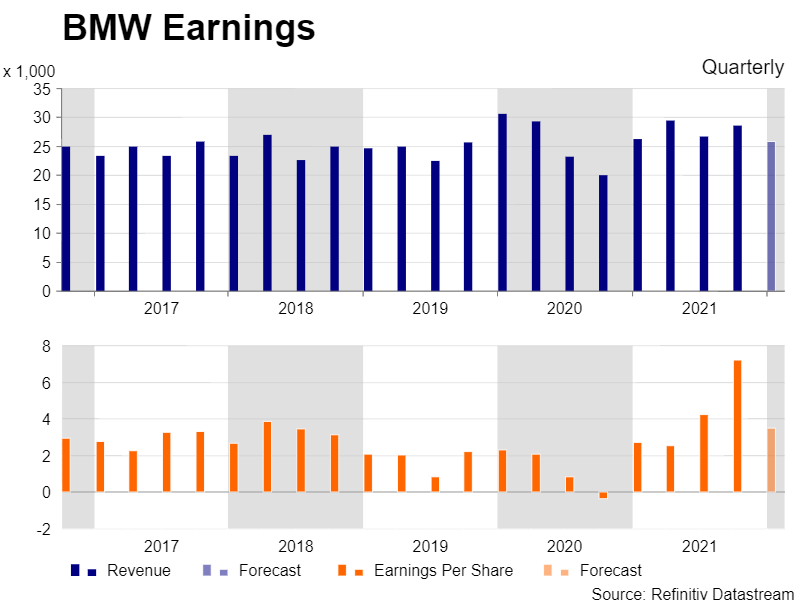 This upside surprise resulted from continued positive pricing effects for both new and pre-owned vehicles, outweighing the worsening semiconductor shortage that is hampering output. However, in the long-term, as costs surge, supply chains remain vulnerable and spending towards the electric revolution is intensified, profit margins are expected to get squeezed. Therefore, the key driver of the stock ahead of the third quarter earnings release could be a comment from management on how BMW has navigated through those challenges.

How the earnings could impact BMW stock?

BMW stock has rallied by almost 22% in 2021, with further gains on the table should the company witness positive earnings surprises. Better-than-expected results could push the price above its 89.10 resistance level. Overcoming this barrier, the price could test its 3½-year high of 96.39 recorded on June 6, 2021.

To the downside, should the results come out worse-than-expected, the bears might send the price towards the congested region where the 83.30 support and the 50- and 200-day simple moving averages (SMA) are located. Moving below that region, the price might seek immediate support at the 76.55 barrier before testing the strong 68.2 level.

From a valuation perspective, BMW has a low forward price to earnings ratio of 6.2, which denotes the dollar amount someone would need to invest to receive back one dollar in annual earnings. Also, the company’s forward price to cash flow ratio is currently at 3.4, which shows that an investor must pay 3.4 dollars for each additional dollar of cash flows generated by BMW. 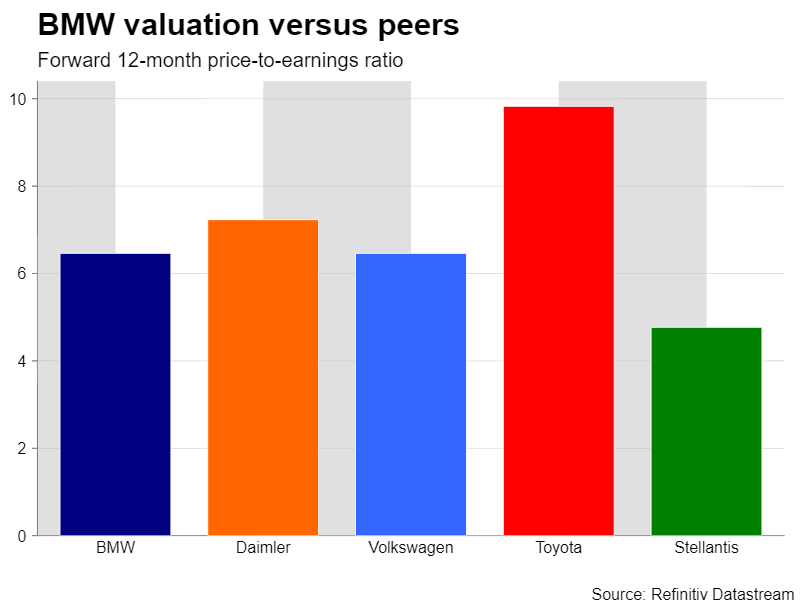 The German luxury carmaker appears to have a lower valuation than most of its peers from a price to earnings perspective. This, together with the company’s low price to cash flow ratio, are making  the stock look like an attractive buy. Therefore, analysts remain bullish on BMW long-term prospects, maintaining a ‘Buy’ recommendation for the carmaker and setting a median target price of €103.65.