The European Central Bank (ECB) will publish the accounts of its March 10-11 meeting on Thursday at 11:30 GMT, providing a clear explanation about its decision to increase the pace of its asset purchases within the program’s limits and keep interest rates steady. The report may bring nothing new to the table, likely causing little movement to the euro, which remains cornered on the downside despite its latest rebound.ECB reacts on yield rally

The sell-off in global bond markets has, justifiably, raised eyebrows in the Eurozone, despite the Fed's detached stance on the issue. Unlike the US, where monetary stimulus is enhanced by fiscal support, less than half of the EU member states have submitted their ratification for the 750 euros recovery fund backed last July, leaving the ECB the main stimulus player in town. The prevailing thought is that the decreasing demand for EU bonds would consequently ruin the ECB’s efforts to stabilize the negative economic risks from the pandemic at a time when the new drastic Covid variants keep challenging the vaccines’ effectiveness across the globe, and lockdown measures resume in key economies.

Moreover, although inflation fears remain subdued in the eurozone, the rally in US Treasury yields has unreasonably spilled into the bloc, though not forcefully, raising fears of higher borrowing costs for corporates and governments at the worst time of the pandemic. Thus, the ECB decided to intervene as the Fed remained on the sidelines, pledging to raise its bond purchases in the PEPP program for the next couple of months to keep borrowing costs in check. The PEPP envelop, which has been extended to 1.85 trillion euros in December, has not been fully utilized yet, with around 900 billion euros remaining unused. Hence, the central bank is still able to increase its purchases within the program’s limits. Note that the Bank can buy 75bln euros of bonds under PEPP without raising the total quota of 1.85trl euros. 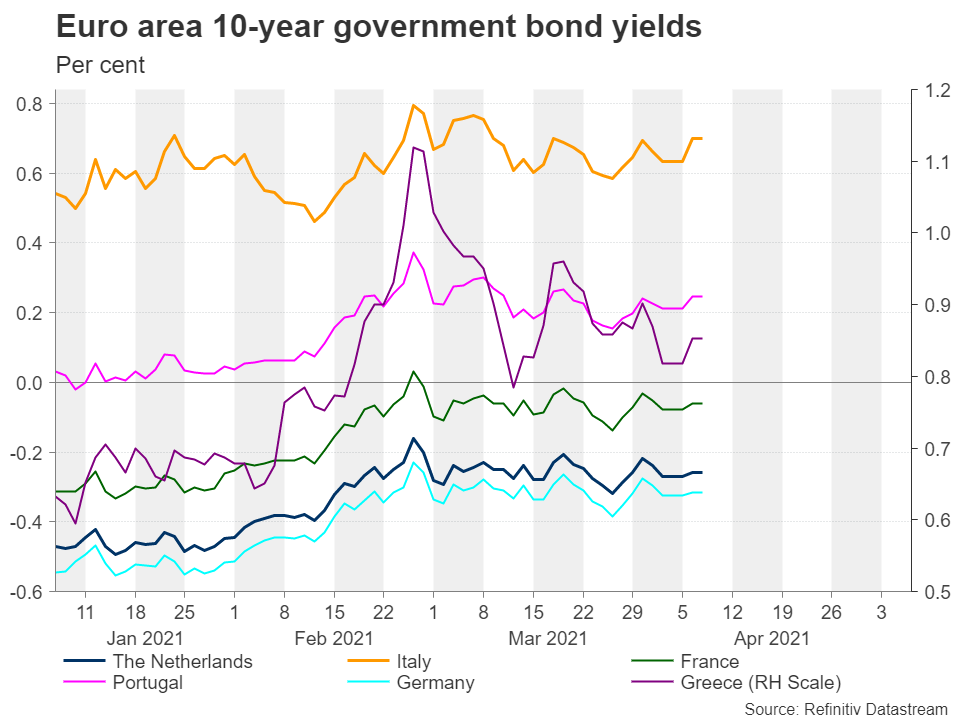 But the speedup in bond purchases suggests the stimulus power could run its course sooner than the March 2022 deadline, especially if the yield rally gets fresh legs, forcing the ECB to further widen its buying taps. In response, the ECB chief confidently said in a Bloomberg interview that “markets can test the central bank as much as they want,” underlining that the Bank will use its tools as and when needed to deliver its mandates and aid the economy. However, in contrast to her previous statements, Christine Lagarde admitted the Bank could deploy the full PEPP envelope and even further expand it, making investors wonder whether other board members are on the same page.

The meeting minutes could shed more light on how large the approval of the increased bond buying was during last month’s meeting, and how willing policymakers are to give the green light to additional purchases. Although the report may not generate strong volatility, as the major instruments to fight the pandemic are, currently, vaccines, it could still push euro/dollar towards the 1.1800 level if it leaves the door open for more bond buying and more importantly for another expansion of the PEPP envelop. A sharper decline may see the test of the key 1.1700 number.

Otherwise, if the minutes reveal strong resilience against the Bank’s bond intervention, leaving the ball in the fiscal court for additional stimulus, or if policymakers reject the case of more PEPP expansions, the pair could revisit the 1.1940 – 1.1980 resistance area and then challenge the 1.2100 mark unless the 200-day simple moving average blocks the way higher.

Can a surge in US retail sales send the dollar and yields soaring? – Forex News Preview