The European Central Bank meets on Thursday for its regular policy meeting and is scheduled to announce its decision at 11:45 GMT, followed by President Christine Lagarde’s press briefing at 12:30 GMT. Having made several dovish turns in recent months, the ECB looks poised to take a bold step in the opposite direction on Thursday as the Eurozone recovery finally gets onto a more solid footing. However, even if the outcome of Thursday’s meeting is the predicted slowdown in asset purchases, policymakers will likely go to great lengths to play down the move, potentially keeping a lid on any euro gains.It’s all looking up

Since March, the ECB has been conducting its Pandemic Emergency Purchase Programme (PEPP) at a “significantly higher pace”, which roughly amounts to about €80 billion a month. The accelerated pace was in response to the Eurozone economy slipping into a double-dip recession from the prolonged lockdowns during the winter months.

However, the economic backdrop has improved dramatically since then as the speed-up in the vaccination rate and earlier stringent virus curbs have kept the economy mostly open during the summer months. Not only that, and more crucially for policymakers, inflation in the euro area is rising much faster than expected, hitting 3% in August. 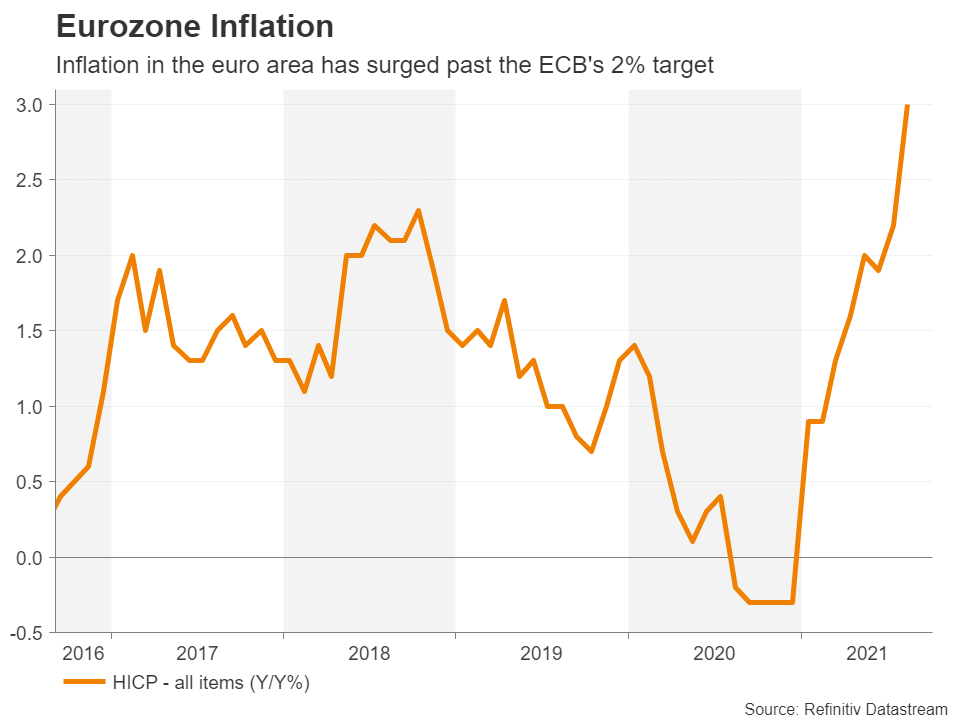 PEPP tapering on the cards

So it makes sense that the ECB eases off the accelerator as the economy is no longer in such dire straits. Policymakers have been dropping taper hints in the run up to the meeting and investors widely expect the central bank will ditch its pledge to continue purchasing bonds at a faster rate, potentially reducing the pace to about €60 billion a month.

Such a move is unlikely to be hugely consequential for the markets. After all, this was the pace of the PEPP before the March boost and ECB data shows purchases have already started to fall steadily towards the €60 billion mark. Moreover, it was always highly improbable that PEPP would have been extended beyond its March 2022 expiry date. Thus, President Lagarde will probably try to portray any reduction in QE as a recalibration of policy rather than tapering. 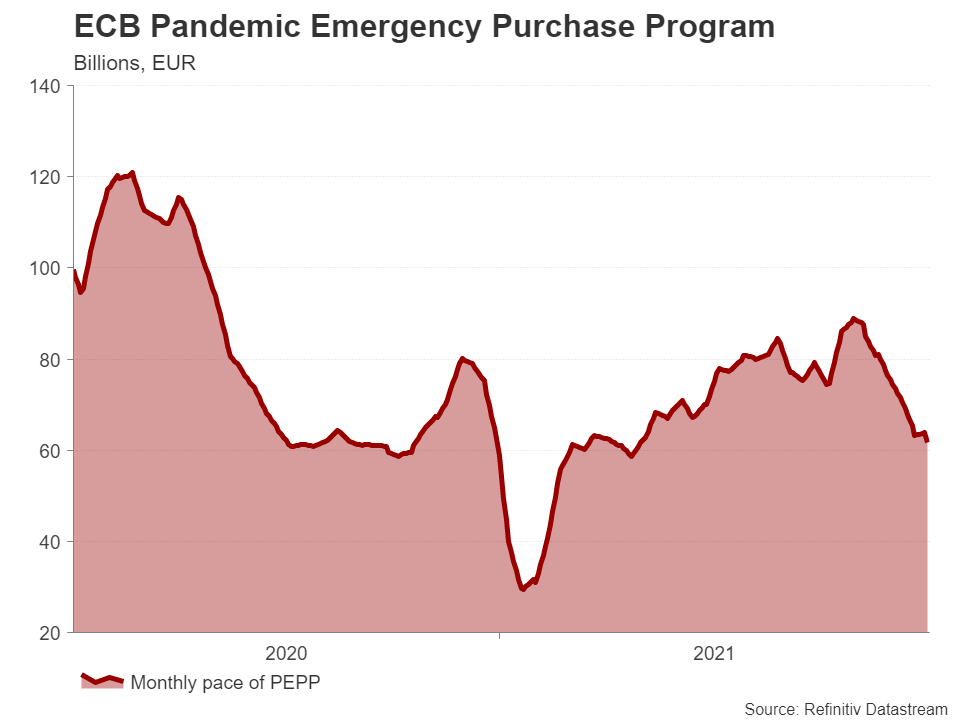 The big decisions to be saved for later

The bigger questions for investors are firstly, how quickly the ECB will slow down its asset purchases as March 2022 approaches because this would determine whether the PEPP’s full envelope of €1.85 trillion is used, and secondly, by how much will the regular asset purchase programme (APP) be scaled up once PEPP has ended.

However, those questions are unlikely to be answered before the end of the year and the real debate for the ECB Governing Council will probably be at the December meeting. By that point, not only should the Fed have already announced its plans, but policymakers will also have a clearer picture of the Eurozone recovery.

Euro might not get the expected boost from tapering

In the meantime, the euro could potentially head back up towards the 61.8% Fibonacci retracement of the March-May uptrend at $1.1917. Steeper gains towards the 200-day moving average (MA) in the $1.20 region are possible if Lagarde is unsuccessful at playing down the hawkish rhetoric.

But if she is able to convince traders that the supply of ECB stimulus won’t be dwindling anytime soon, euro/dollar could slip towards its 50-day MA, just above the $1.18 level. Even lower, the focus would turn to the 9½-month low of $1.1662 from August 20.

Once again, the market response will depend greatly not just on Lagarde’s tone, but by how much she gives away. Should investors sense deep divisions within the Governing Council, it could lower the odds of a higher pace of APP after March 2022.