The flash estimate of first quarter GDP growth is due out of the Eurozone on Friday at 09:00 GMT. Fresh lockdowns are expected to have dragged the euro area economy into a double-dip recession, highlighting Europe’s bumpy recovery road. However, forward-looking indicators suggest a rebound is already underway, and combined with the pick-up in Europe’s vaccination pace, investors are more optimistic about the months ahead. Consequently, the euro has perked up lately, but how sustainable is this bullish phase?Not so grim in Europe

The Eurozone economy contracted by 0.7% quarter-on-quarter in the three months to December as the recovery unravelled when Europe became gripped by a second wave of Covid-19. After a brief respite, a third wave struck the continent, which is still ongoing and many countries remain in lockdown. The preliminary GDP print for the first quarter is expected to show the euro area economy shrunk by a further 0.8% q/q. 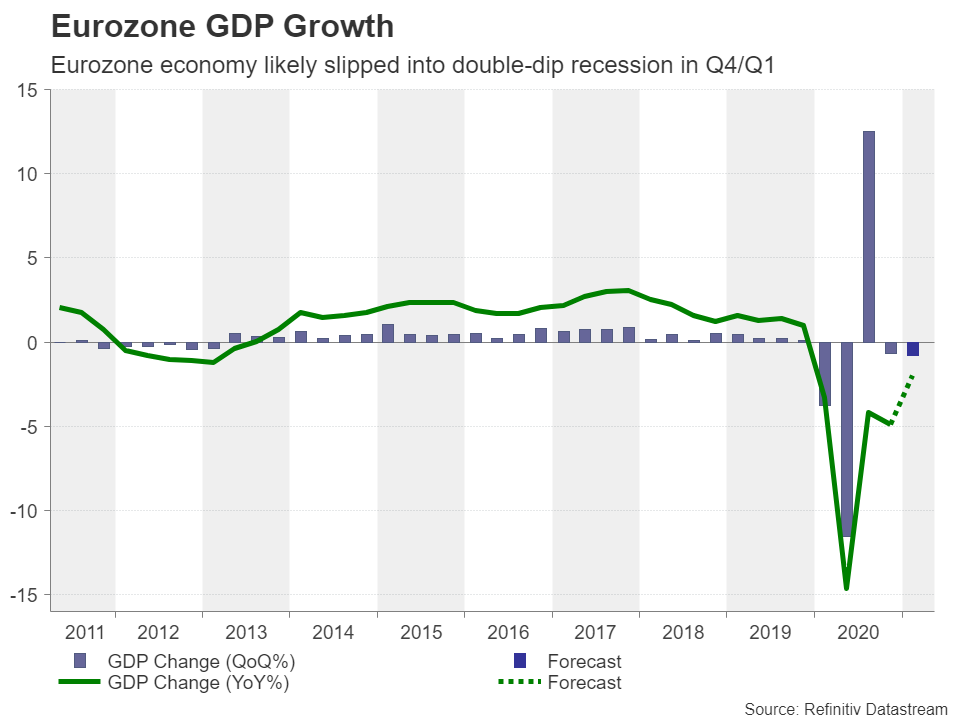 The year-on-year decline, however, is forecast to have narrowed from 4.9% to 2.0%. Although this would mainly be down to the low base effect from Q1 2020, there are other reasons to be encouraged from the data. For one, analysts were predicting a much steeper contraction just a few weeks ago. But after a year of constant lockdowns, businesses and individuals have adapted to living with the endless virus curbs and European economies are now able to withstand the latest round of restrictions much better.

Businesses have learnt to live with virus rules

Eurozone PMIs have surged in the past couple of months, with the services sector expanding in April for the first time since August 2020. The boom in manufacturing also shows no sign of abating; the manufacturing PMI hit the highest on record in April.

Although it will probably be several weeks before the big European economies see virus restrictions being significantly lifted – so a full recovery undoubtedly remains a long way off – the recent acceleration of the European Union’s vaccination programme has raised hopes that the latest lockdowns will be the last.

Can US yields stay so tamed much longer?

This renewed optimism is being reflected in Eurozone government bond yields, which have been edging higher during April, even as the European Central Bank has supposedly been ratcheting up its asset purchases. US Treasury yields have in the meantime been drifting lower, reducing the dollar’s yield advantage over the single currency. 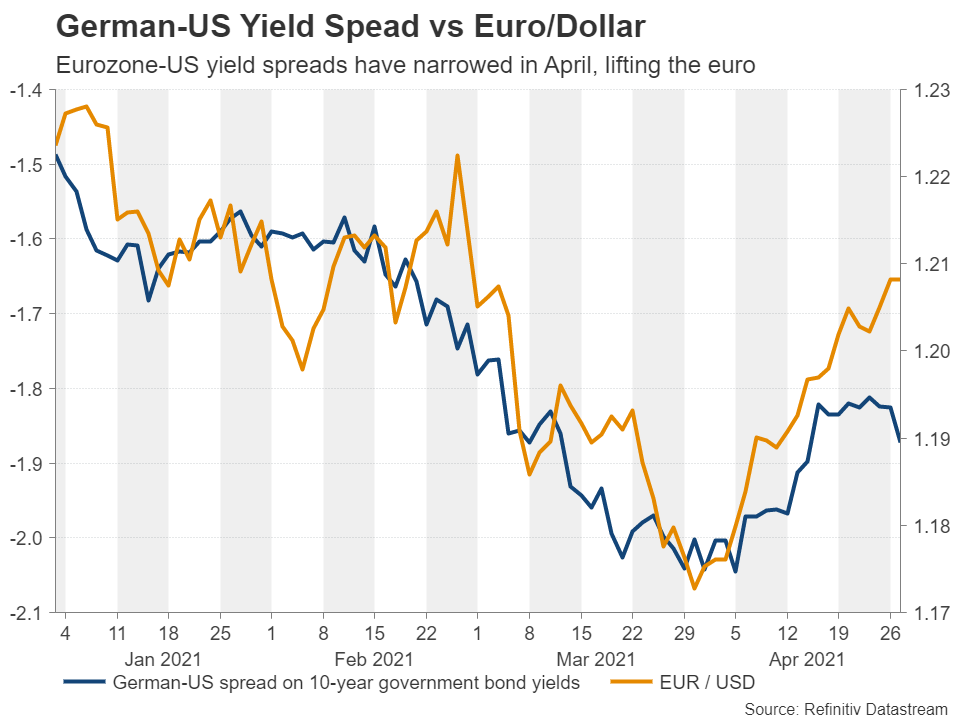 However, it remains to be seen how long this trend will last and whether the euro’s impressive rebound can be sustained. The US economy is firing on all cylinders so the risk of inflation spiralling out of control and forcing central bank action is far greater in America than it is in the euro area. But that may not necessarily mean a stronger dollar.

ECB may struggle to be as dovish as the Fed

The ECB appears keener to wind down its emergency stimulus measures than the Fed and could signal such a move as early as June. There’s a growing focus on the June meeting for the Fed too, but the difference is that the ECB has a serious communication problem and may struggle to contain market expectations, while the Fed is less likely to spark taper tantrum.

Thus, the euro could extend its recovery against the dollar even as growth in the US exceeds that in Europe in the next few quarters. In the short term, however, euro/dollar’s fortunes will be determined by whether the pair can overcome tough resistance in the $1.21 area, which is the 61.8% Fibonacci retracement of the January-March downleg. A successful climb above this mark could pave the way for the February top of $1.2242.

However, should some of the European optimism fade or the dollar attempts a comeback, the euro could decline towards the $1.1950 region which is the intersection of the 38.2% Fibonacci as well as the 20- and 50-day moving averages. A drop below this junction would turn attention to the 23.6% Fibonacci of $1.1855.