The flash inflation estimates for August are due out of the Eurozone on Tuesday at 0900 GMT. The headline rate is expected to jump to a near-decade high. But this is unlikely to speed up policy normalization plans at the ECB, which, like other central banks, thinks the surge is transitory. The euro may therefore struggle to find much upside from the data, with any boost potentially being short lived.Inflation is accelerating, but it’s ‘transitory’

Inflationary pressures in the euro area are clearly heating up. The Harmonised Index of Consumer Prices (HICP) is expected to hit the highest since late 2011 in August, rising to 2.8% year-on-year from 2.2% in July. Underlying measures of inflation are also projected to edge up. HICP excluding food and energy is forecast to increase from 0.9% to 1.4%, and the rate that also excludes alcohol and tobacco to more than double from 0.7% to 1.5%. 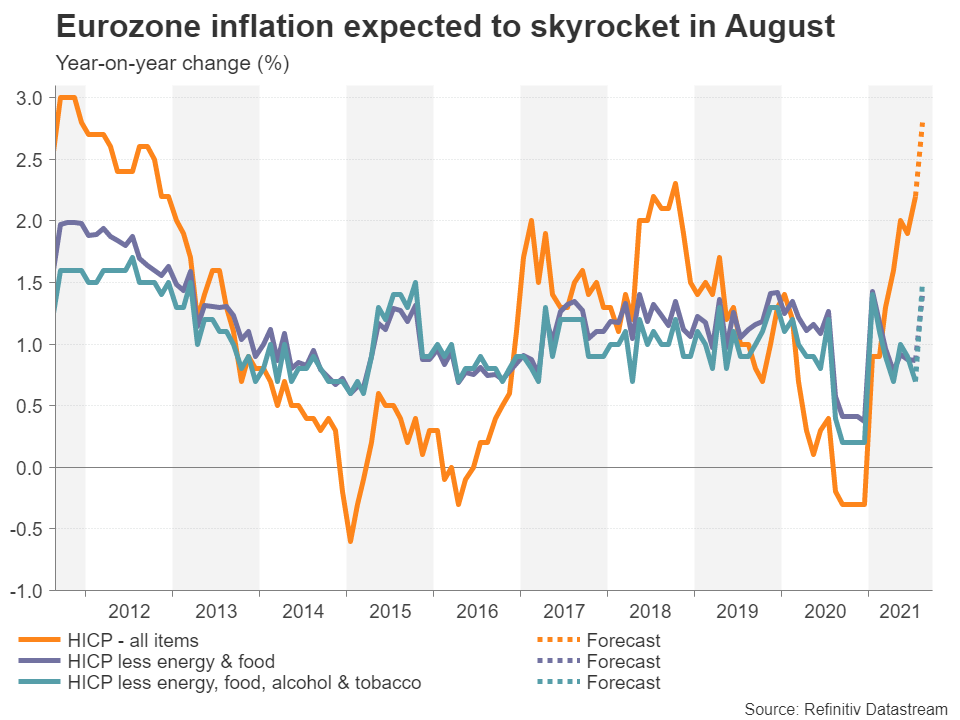 The expected spike will push inflation well above the European Central Bank’s newly adopted symmetric target of 2%. But the question is, would this raise any alarm bells among policymakers, who have been longing to see a revival of inflationary pressures after years of missing their previously stringent target of close to but below 2%? With ‘transitory’ being central bankers’ new favourite word, the answer is probably not.

ECB has toughened its criteria for hiking rates

Following the conclusion of the monetary policy strategy review in July, which then paved the way for a complete revamp of the forward guidance, the ECB has taken a leaf out of the Fed’s book by loosening its approach to how it targets inflation. The ECB now not only wants inflation to “durably” hit 2% “well ahead of the end of the projection horizon”, but it also wants to see underlying inflation to trend towards the target at the same time.

That means that policymakers will be in no rush to raise interest rates anytime soon as it could take several years for inflation to converge sustainably around 2% once the effects from pandemic have dissipated. And while speculation about the ECB’s own taper plans is also fast becoming a hot topic in the markets lately, ultimately, it is the timing of rate hikes by the Fed versus the ECB that investors care most about.

ECB taper may not lag Fed by much, but rate hikes will

That divergence in the interest rate path between the two central banks is expected to weigh on the euro’s outlook against the US dollar for quite some time. In the more medium term, the single currency might find some support from taper talk. The ECB will very likely end its emergency purchase program (PEPP) in March 2022 so it has to start drawing up plans on how this will be done by December at the latest, which is roughly when the Fed is anticipated to announce its own tapering.

But that’s where the similarities end. Although the Eurozone economy isn’t doing too badly and there’s little risk of the Delta variant pushing the bloc into another recession thanks to soaring vaccinations, the US economy is doing even better. Aside from the prospect of another big fiscal stimulus package from Congress, which should keep the growth momentum going, the threat of high inflation becoming sticky is much greater in the United States than in the euro area.

So where does all this leave the euro? On the plus side, the monetary policy divergence is mostly priced in and barring any surprises from either the Fed or the ECB, euro/dollar’s downtrend since June may not have much further to run. However, neither is there much prospect of the euro gaining significantly in the next few months.

In the immediate term, euro/dollar is facing a challenge at its 50-day moving average around $1.1810. The 78.6% Fibonacci retracement of the April/May upleg is slightly overhead at $1.1823. Stronger-than-expected inflation numbers on Tuesday might help the pair overcome this resistance area, which could clear the way for the July peak of $1.1909 that can be found slightly below the 61.8% Fibonacci.