The euro went downhill lately as Europe became the epicenter of another pandemic wave, forcing several economies to return to lockdowns ahead of the holiday season. With new business containment measures rolling in, investors are wondering whether inflation will continue to escalate. On Tuesday, CPI inflation figures for November are expected to jump again for the fifth straight month, but with Covid making a fresh round, the euro will probably receive only a modest boost.Growth jitters resurface

The eurozone economy seems to be stuck between a rock and a hard place nowadays. On the one hand, businesses keep transferring some of their pandemic-related higher input costs to consumers, making inflation spiral higher for the fourth consecutive month to a 13-month high of 4.1% y/y in October. On the other hand, covid infection cases have recently started to ramp up dangerously again, with the Netherlands, Germany and Austria being some of the member states to reimpose new curbs to reduce traffic in the streets and promote vaccinations ahead of the winter and holiday season.

The above have already resurfaced fears of a growth slowdown in the region, but the truth is that intermittent business closures during the previous lockdown phases had not hugely affected economic growth. GDP growth had accelerated by 14.3% y/y in the second quarter following a soft contraction in the first three months of the year. Hence, assuming consumption and hiring remain buoyant, and business activity stands healthy, as recent Markit PMI figures reflected, the economy could still catch up in the coming quarters. 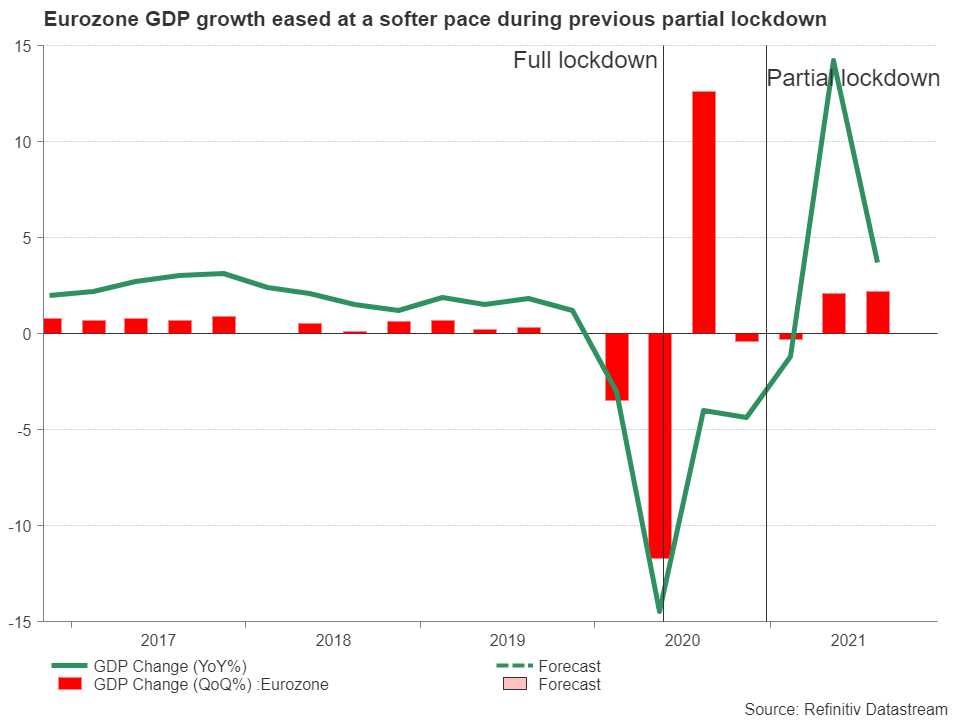 Yet, how inflation will develop, and therefore how monetary policy will respond, could be puzzling. The European Central Bank (ECB) is blindly trusting its inflation models, which suggest current price pressures are transitory, foreseeing price growth easing to 2.0% in the medium term. The headline CPI rate, however, is already double that threshold, and according to forecasts it has further stretched to 4.4% y/y in November – the highest since 1991, while the core CPI measure, which excludes volatile food and energy prices, is also projected to edge up to 2.2% y/y.

ECB may choose to play safe

Under different circumstances, another acceleration in inflation data would press for an earlier rate hike as divisions within the ECB have further widened lately, with the German Bundesbank President Jens Weidmann sounding the alarm that inflation will probably remain above the 2.0% target in the medium-term and slow at a more gradual pace than policymakers previously forecast.

The German ECB board member, however, is stepping down at the end of the year and the threat of a new ‘Nu’ covid variant, as well as, the potential of stringent lockdowns in the Eurozone during winter will probably be a good reason for the central bank to maintain its rate outlook steady for now and keep its liquidity taps open till March when it meets in mid-December.

What could be more toxic for the ECB is a cocktail of continuous inflationary pressures backed by supply constraints and a decelerating economic growth (stagflation) in the coming quarter, but that remains to be seen.

As regards the market reaction, an upside surprise in CPI readings could meet heightened pandemic concerns next week, likely causing a muted positive reaction in euro/dollar. Euro/dollar is currently in a recovery mode following the plunge to an almost 1½ -year low of 1.1185, and a clear break above the nearby 1.1370 barrier is probably required to drive the price up to 1.1450. Yet, the broader bearish outlook would remain intact unless the pair speeds above the 1.1565 – 1.1600 area.

In the event the data miss expectations, justifying the ECB’s current accommodative stance, euro/dollar could pull back to test the low of 1.1185. Failure to rebound here may activate a more aggressive sell-off towards the 1.1000 number.

Week Ahead – Fed, BoC to sing from same hawkish hymn sheet; data flurry on the way