US ISM and ADP data eyed ahead of jobs report; can they lift the dollar? – Forex News Preview

The August jobs report is undoubtedly this week’s focal point for the US dollar but ahead of that, the ISM manufacturing PMI and ADP employment print could warm things up for jobs Friday. The ADP employment report is due at 12:15 GMT on Wednesday and the ISM manufacturing PMI will follow at 14:00 GMT. After Fed Chair Jerome Powell’s cautious nod to tapering at the Jackson Hole symposium, the freshly bruised US dollar might be able to pare some losses should the data bolster expectations of a September taper move.Is Delta surge scuppering the recovery?

The US economy may have recouped all the lost output from the pandemic but many of the scars have yet to heal and the recovery in the labour market is far from complete. This is one explanation as to why the Fed has yet to pull back some of its emergency stimulus as it wants to get as close to full employment as possible before doing so. But a growing number of Fed policymakers lately think the economic recovery is more than sufficient to begin the tapering process and Powell also appears to be converging towards this view.

The problem is the economy may have suffered a setback in August when the rampant Delta variant started to cause significant disruption to both consumer and business lives. For now, policymakers are merely keeping an eye on how the Delta outbreak is unfolding and are not hugely worried. But should more of the incoming data paint a deteriorating economic picture, the Fed might have second thoughts about an Autumn taper move.

ISM gauge will be key indicator for August activity

September’s FOMC meeting alone will be heavily swayed by Friday’s nonfarm payrolls numbers. However, the data leading up to the NFP report may set the mood, exacerbating the market reaction. The ADP employment report, which measures private sector payrolls, is often considered a precursor to the official jobs print. It is expected to show payrolls rising by 613k in August, up from 330k in the prior month. 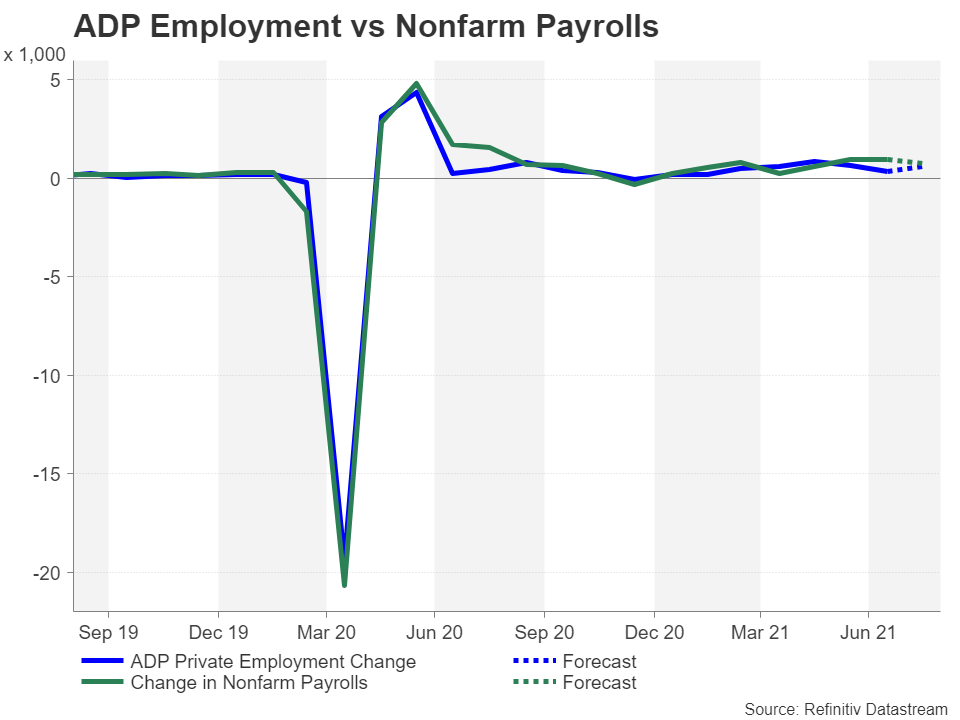 The ISM manufacturing PMI will be the one to watch, however, as some other surveys such as the flash PMIs by IHS Markit pointed to a worsening trend. The index is forecast to decline from 59.5 to 58.6 in August, which would not be particularly worrisome as it’s still well above the 50 level that separates expansion from contraction. An even bigger drop, though, might raise some alarm bells. Investors will also be monitoring the PMI’s sub-components such as the prices paid and employment indices for any clues about whether input costs are easing and if hiring slowed due to the Delta strain. 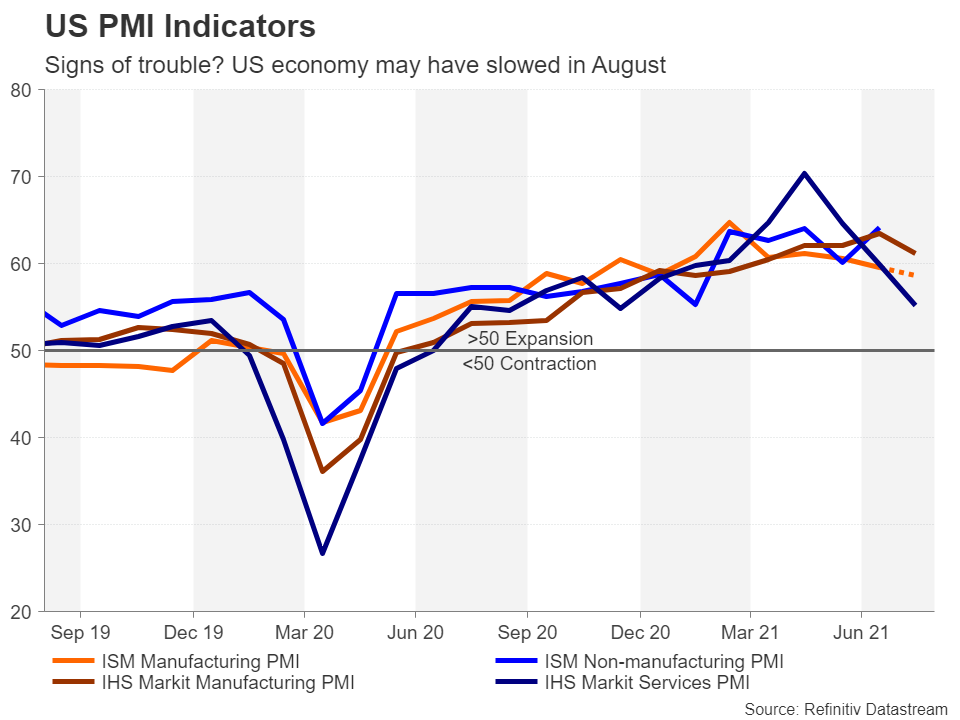 Weaker-than-expected figures overall could accelerate the latest selloff in the greenback. The dollar’s index against a basket of currencies slid below its 50-day moving average on Tuesday and further losses would turn attention to the 38.2% Fibonacci retracement of the May-August uptrend at 92.13. Below that level, the 91.80 support will be a crucial point of defence for the bulls.

However, if Wednesday’s data restores some confidence in the growth momentum, the dollar index might claw back above the 23.6% Fibonacci retracement of 92.74 and head for the 93.20 resistance, reinforcing the bullish structure.