A battle of narratives continues to rage in the forex market, with mounting signs that the US economy is in the early stages of a stimulus-fueled boom being negated by the Fed's insistence that this won't be enough to trigger any policy tightening. As a result, the dollar has taken some heavy fire this past month as markets pushed back the timeline of future rate hikes.

Yet, the question is whether the Fed will stick to this dovish stance if the coming spell of economic growth exceeds its wildest expectations. We are already seeing anecdotal evidence of inflation gathering force, with commodity prices on fire and supply chain disruptions. Add into the mix direct money transfers and executive orders for government wage increases that amplify the bargaining power of workers after several decades, and it's a recipe for a 'shock'.

Indeed, the Fed's Kaplan offered a similar message on Friday. He noted upside risks to growth, highlighted signs of excess in financial markets, and repeated that the central bank should start talking about QE tapering soon. In combination with some risk aversion in the broader market and month-end flows, this brought the dollar back to life. 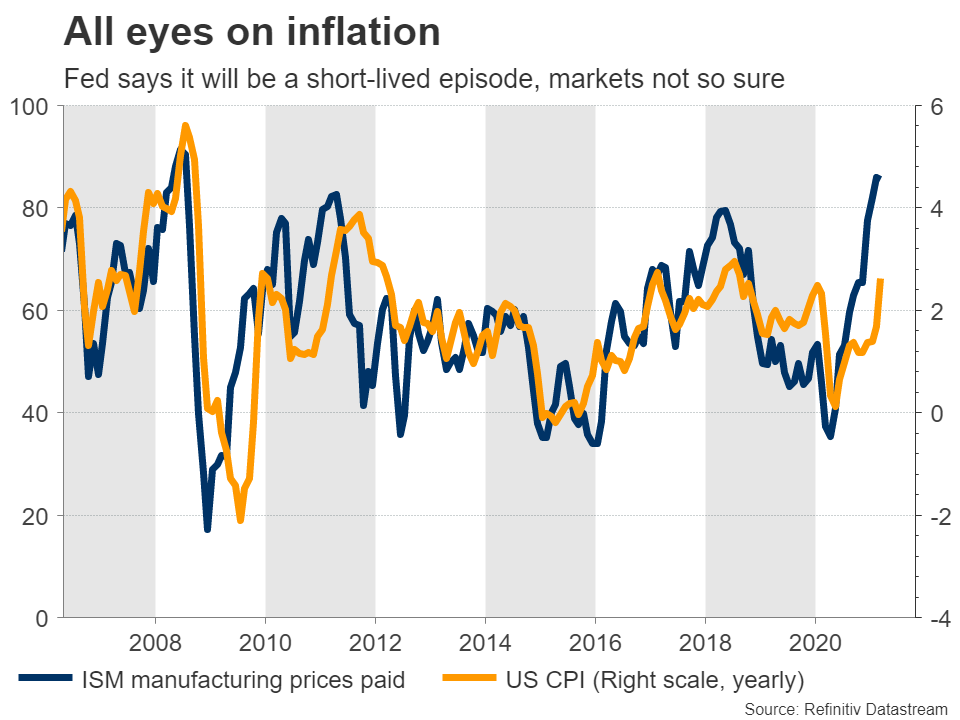 Of course, Kaplan is currently a lone wolf within the Fed and the prospect of tapering is a longer-term story. Over the next few weeks, any piece of stellar US data will likely be explained away as transitory, and the dollar may struggle to find love. Ultimately though, the strength of the recovery will become harder and harder to dismiss, and the Fed could start 'thinking' about tapering as we approach summer-end.

In the stock market, the major indices hit an air pocket on Friday. The S&P 500 fell by 0.7%, without any clear catalyst behind the drop. That said, it is natural to see a minor retreat after such a fantastic month for equities, and futures suggest a solid bounce back when Wall Street opens today.

Looking ahead, it seems like smooth sailing for stocks. The current environment is the best of all worlds for riskier assets – the underlying economy is recovering quickly, the virus is almost defeated, and the Fed won't turn the ship around for a few more months at least. Even after the central bank finally begins to phase out some liquidity, it will probably do so at a snail's pace, fearful not to disturb the waters in the market.

Over in Europe, ECB vice president de Guindos was on the wires earlier today saying that his central bank might also consider turning off the liquidity taps if the recovery and vaccinations continue to gather speed. His remarks helped euro/dollar to rebound from near the $1.20 territory, along with the more sanguine tone in equity markets. That said, the euro area economy is still far from the stage where the ECB can truly consider tapering.

ISM manufacturing and RBA decision on the radar

As for today, the main event will be the ISM manufacturing PMI for April from America. Beyond the headline number, investors will focus on the prices paid by companies to gauge how quickly inflation will accelerate in the coming months, and on the employment component ahead of the official US jobs report on Friday.

During the Asian session Tuesday, the spotlight will fall on the rate decision by the Reserve Bank of Australia. Recent employment data have been solid, but inflationary pressures remain muted and it is probably much too soon for the RBA to hint at policy normalization.