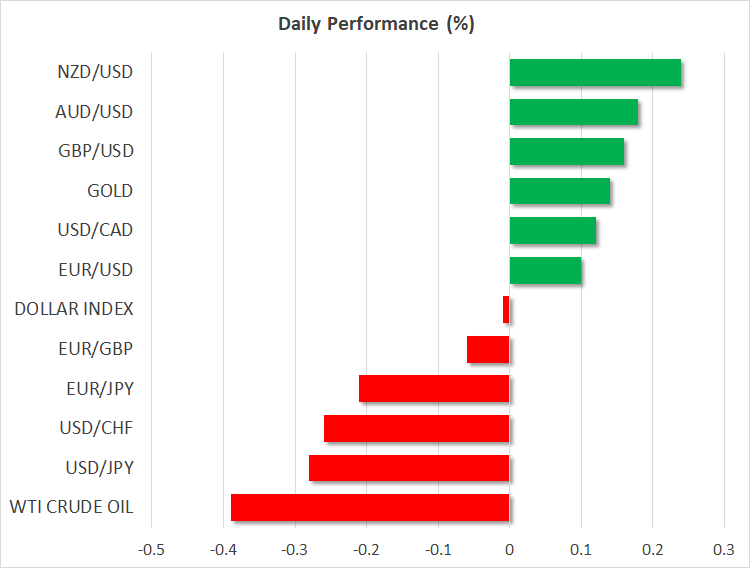 ECB to taper but call it something else

The European Central Bank will probably join the taper bandwagon when it announces the outcome of its policy meeting later today. However, with some way still to go for the Eurozone recovery and a sizeable degree of uncertainty about the outlook, policymakers will likely attempt to avoid calling the move tapering so as not to spark a market tantrum.

A sharper-than-expected slowdown in the pace of asset purchases would risk pushing up Eurozone government bond yields, which had climbed to elevated levels before the ECB intervened and stepped up its emergency bond purchases in March. Although the euro area’s recovery is somewhat more fragile than America’s, it’s difficult to see hawkish Governing Council members supporting this accelerated pace for much longer given the progress since March.

Bond yields have come down considerably from the yearly highs, the EU’s virus recovery fund is finally being disbursed among member states, and the economic data remain solid despite some easing in the growth momentum. More importantly perhaps for policymakers, inflation in the euro area hit a decade high of 3% in August.

President Lagarde will have to tread carefully in her press briefing to reporters if she does not want to see any reduction in the pace of asset purchases being perceived as tapering by the markets. However, even if today’s meeting turns out to be slightly more hawkish than anticipated, it’s unlikely the euro will be able to make significant advances as the bigger questions about how PEPP will be wound down will probably be put off until December.

Plus, investors will want to weigh the ECB’s taper plans with the Fed’s before substantially adjusting their euro/dollar positions. For now, the single currency has found some support above the $1.18 handle.

The euro’s steadier footing following three days of declines was mirrored by other majors as the US dollar’s rebound cooled off somewhat. The greenback is being pulled down slightly by lower Treasury yields, which came under pressure on Wednesday following the release of the Fed’s Beige Book.  The Fed’s regular update on economic conditions across its 12 districts pointed to a slight “downshift” in economic growth, adding to existing doubts about the outlook amid the ongoing Delta outbreak.

With central banks gradually removing or getting ready to trim their pandemic-era stimulus, markets are becoming increasingly anxious about how well the recovery will hold up.

The dollar’s broad retreat bolstered even the riskier pound and antipodean pairs. Sterling edged back above the $1.38 level and the aussie and kiwi were last up about 0.2%. Though, the overall mood was one of risk-off, which lifted the safe-haven Japanese yen against most of its peers.

Apart from the dollar’s pullback, the pound found support in more hints from the Bank of England that a rate hike is forthcoming next year following Governor Andrew Bailey’s hearing yesterday before a parliamentary committee.

The Canadian dollar underperformed after the Bank of Canada cited some downside risks to the growth outlook even as it kept policy unchanged yesterday.

Sentiment in equity markets was also dented by the growth concerns and fears that central banks might withdraw stimulus too quickly as the Fed looks set to announce tapering soon. Comments from Kaplan and Williams yesterday indicated the soft August jobs report hadn’t materially changed policymakers’ views on the timing of tapering.

Meanwhile, another round of crackdowns by Chinese authorities on the gaming industry slammed the stocks of gaming companies, not just in China but those listed in the United States as well. The Nasdaq Composite slipped 0.6% on Wednesday as the tighter regulations in China took the steam off the latest rally that had produced four consecutive days of record closes.

The S&P 500 and Dow Jones also closed lower and their futures were indicating a negative open today. However, despite the sea of red in global stock markets today, there were no signs of panic in China just yet, with the CSI 300 index ending the day marginally in negative territory.

Investors will be watching more Fed speakers today as well as the debate in the House Ways and Means Committee plan on part of the $3.5 trillion infrastructure bill.