Trump’s presidency opened several fronts of confrontation between the United States and other key global economic powers, instantly increasing volatility in the markets as traders love to trade. With Biden ready to pick up the torch now, questions are arising over whether he could raise the flag of peace and build stability. However, his recent political shift suggests that the “America first” nationalism may not be easily replaced, and some battles may not see a ceasefire soon.No majority, no control

Without majority in the Senate and President Trump refusing to concede his defeat, Democrats will have a tough time passing bills in Congress and thus Biden may struggle to reverse Trump’s controversial policies and generally accomplish his campaign promises. Markets, however, price in that the White House may not totally abandon Trump’s nationalism, but instead use a different approach to promote it, although the new President-elect could bring the calm after the storm and slow tensions with key economies.

If there was one thing Republicans and Democrats can agree on, that is China. Joe Biden, who has a rich background in foreign affairs, is not unfamiliar to the Chinese leader Xi Jinping, who once called him an “old friend” back in 2013 as both have met several times during the Obama years as vice presidents. The truth is that competition has always been perceptible between the two biggest trade powerhouses in the world. Their relations, however, reached the lowest point after several decades during Trump’s presidency, which unleashed a series of tariffs, put Hong Kong’s independence at risk, raised caution in the South China Sea, and crossed swords in the tech industry.

Although a phase one trade deal aiming to scale back tariffs and increase US exports by $200 billion by 2021 has been signed between the two sides just before the health crisis started, the gap of disputes remains too large to close anytime soon. When asked whether he would allow Chinese firms to build critical infrastructure during a Democratic debate in February, Biden harshly criticized the Chinese leader over his political stance and said Beijing “must play by the rules”, while calling him a thug during his speech. His remarks clarified that the White House will not remove pressure from China’s shoulders, but might maintain protectionism even though tensions between the two sides were more contained during the Obama times and the Chinese economy was expanding.

Will the tariff game continue?

The next question that arises is how will he fight China? Well, probably tariffs will not be his first choice although he did not exclude them either. The large US trade deficit with China was the trigger of the trade war but after two years of exchanging import tariffs, which crippled stocks and commodity prices and boosted safe havens such as gold and the US dollar, the amount fluctuated only to return where it had been before 2016. Biden could use a different approach that may have a less aggressive tone, especially when tweeting on social media, but this could still be a tougher treatment of China than Obama’s model with scope to build the American trade leadership. His willingness to shift away from isolation and repair relationships with the NATO alliance, re-join the World Health Organization and the Paris climate agreement may have another important target of building trust with other key economies and hence establishing an international coalition, which Beijing may not be able to ignore. 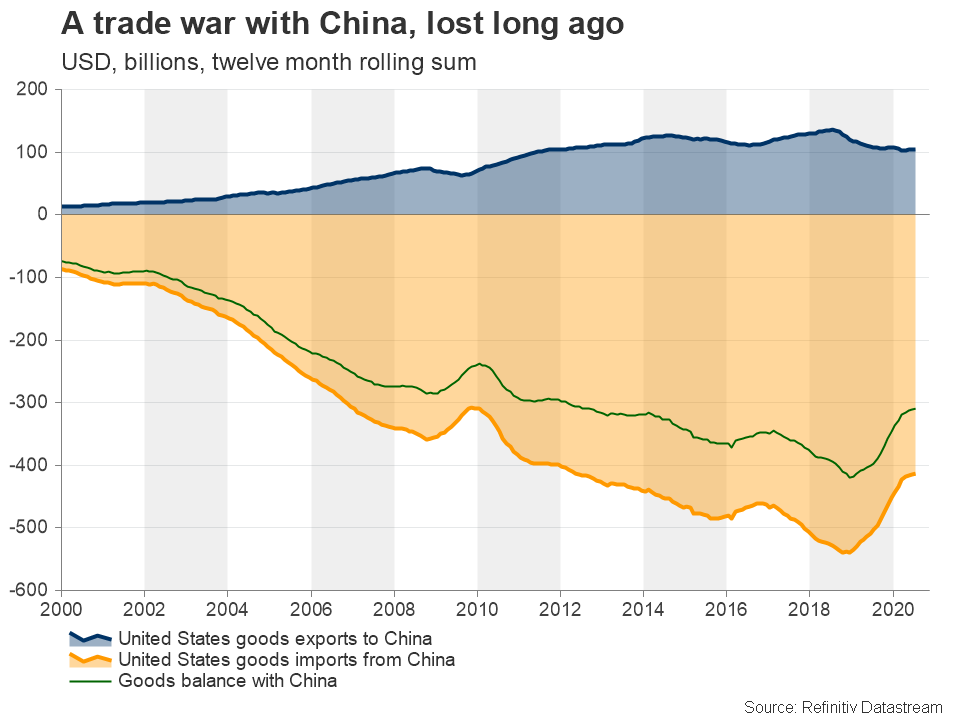 Obama times are over

Unlike the Obama times, the world is more sceptical over China’s political strategy, especially after the spread of Covid-19, while Jinping’s ambitious “made in China 2025” plan is another worry for the US tech sector. Therefore, a return to pre-2016 conditions would not be a wise decision by Biden and would definitely cut the much-needed backing from Republicans if the Congress remains divided. That suggests a continuation of Trump’s protectionist mode at least on the trade front, though through a different communication channel.

How volatile markets could turn?

As regards the market reaction, the trade war with China, which also triggered conflicts with other key partners such as Canada and the Eurozone, generated fresh volatility in global markets mostly because Trump’s tweets were unpredictable. Besides the yuan, the commodity-depended Australian and New Zealand dollars, experienced a severe deceleration over the past two years, while the US stock indices also faced some strong dips, though managed to quickly recover on the back of corporate tax cuts and growing optimism over the US economy. 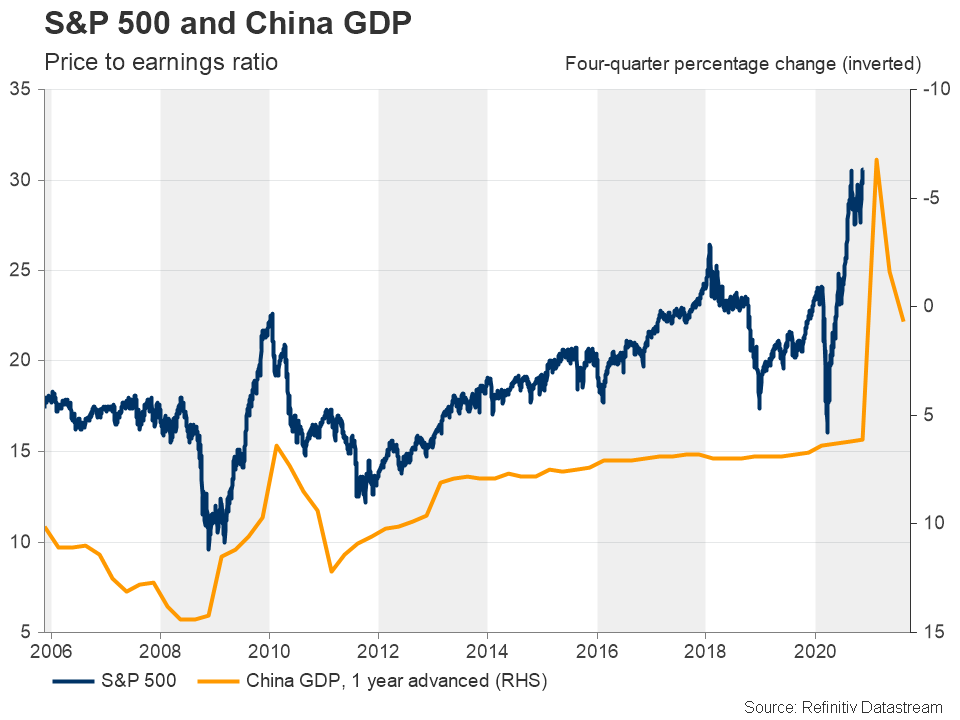 Managing Covid, establishing a suitable infrastructure for vaccine distribution, improving health care affordability, and financing those in need during the crisis, will be a top priority for Biden in 2021. Hence, conflicts with China may take the back seat for now and resurface after the pandemic finally peaks. Nevertheless, Biden is expected to communicate in a more predictable manner, therefore the market impact from US-China tensions could be less aggressive in the future and could even help risk currencies to recover if negotiations head in the right direction. Still, given the multiple open battles between the two sides and the transforming competitive tech industry, it is likely that things could get worse before getting better.

Looking at AUD/USD on the weekly chart, which is sensitive to Chinese headlines, the pair refused to drop below the 0.7000 level in late-October, holding its upward pattern from March intact. The narrowing distance between the 20- and 200-weekly simple moving averages (SMAs) is another positive indication for the market trend. Yet, technically, the pair should close decisively above the 0.7350 barrier to spark buying appetite. The way higher could then be a bumpy one, with the 0.7500 and 0.7700 former barriers potentially blocking the bulls.

In the negative scenario, where global economic conditions deteriorate, the price could cross below the 0.7000 mark to raise selling interest. In this case, support could next emerge somewhere 0.6790 and 0.6670.