FX year ahead 2021: Too much dollar pessimism?

It has been year of absolute chaos, but hopefully 2021 will be much calmer as the global economy heals its wounds. The overwhelming consensus in the FX arena is for the US dollar to sink further as the reflation trade dominates, lifting all other boats. The ‘catch’ is that much of this weakness may be baked in already. The story for the euro is not attractive either. While dollar weakness could dominate early on and push euro/dollar a little higher, the euro may not fare as well against other currencies. The wild card is the British pound, whose fate hangs on the Brexit endgame. King dollar is out?

What a year. Countries went into lockdowns, international borders were shut, the retail industry was devastated, America saw massive riots, and crude oil prices turned negative. But there were some encouraging things too. Governments and central banks started working together after a long time, delivering a stimulus response so powerful that it eclipsed everything else. It seems that even a global pandemic is no match for extravagant government spending and rock-bottom interest rates.

The world’s reserve currency had a tough year too. It roared higher in March as investors looked for shelter from the storm, only to collapse after the Fed injected the US economy with a stimulus dosage much bigger than other central banks. Simply put, the US had a more aggressive policy response than most countries, and investors lost their appetite for hoarding dollars defensively once it became clear the sky was not falling. 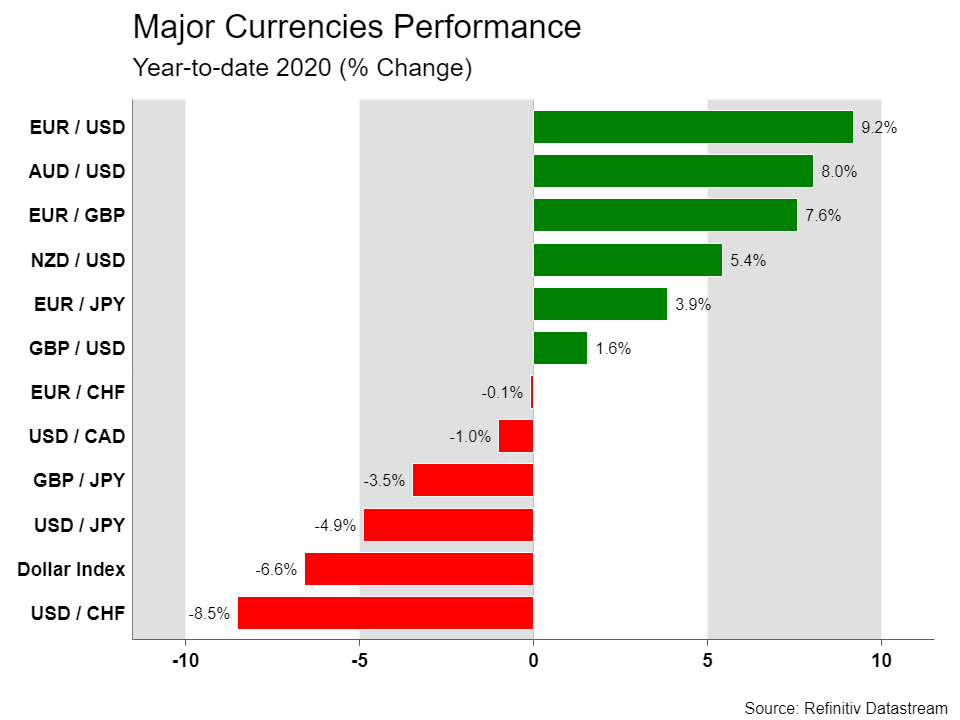 The burning question is whether the dollar’s pain will continue into 2021. The consensus within the financial community is that it will, and there are solid arguments why. The main element is that US inflation is expected accelerate faster than other economies, pushing real interest rates lower as the Fed won’t allow US bond yields to move much higher. In addition, safe-haven demand for the dollar could fade as the global economy recovers and trade policy towards China calms down under a Biden administration.

The ‘catch’ is that much of this has already played out. The dollar has fallen dramatically and positioning by leveraged funds is now at very bearish levels, making it a crowded trade. This doesn’t mean the reserve currency cannot fall further. Rather, it implies that any risk-off episode or any other piece of dollar-positive news could spark an epic short squeeze and hence a powerful rebound.

Consensus trades often don’t play out as expected, precisely because they are so anticipated. It’s a complex world and a lot of things can go wrong. In this case, everything hangs on the assumption that things will return to normal quickly as the masses are vaccinated. That may turn out true, but markets seem to be underestimating the uncertainties. 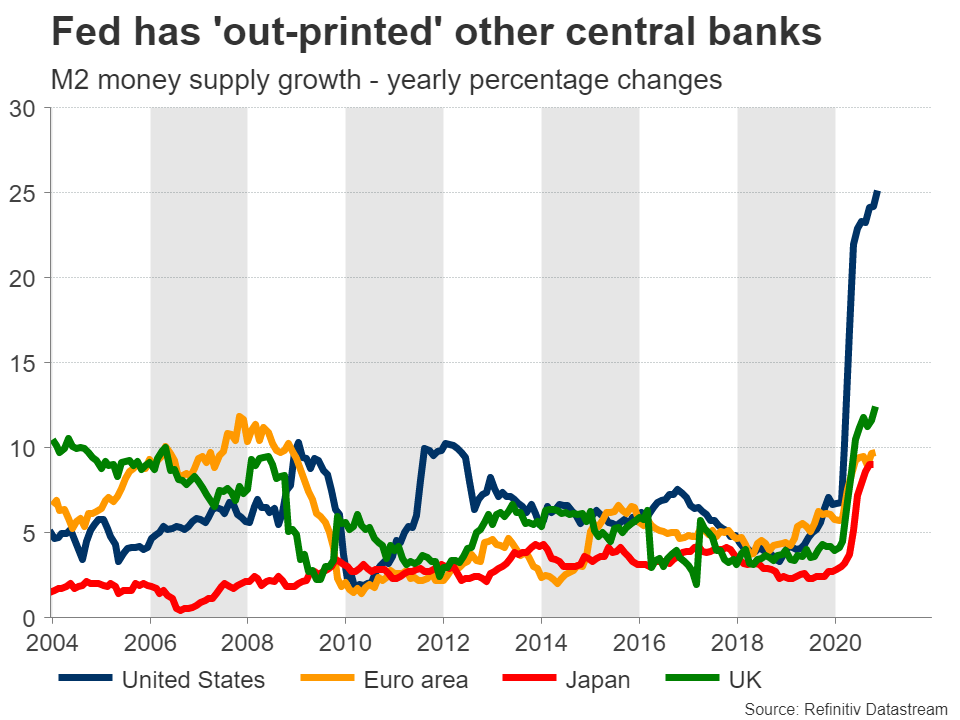 There’s still a major risk of a wave of bankruptcies as government support is withdrawn, or an eviction apocalypse in America as the moratoriums expire. Or perhaps inflation could pick up more than markets expect, forcing the Fed to take its foot off the gas.

The bottom line is that while euro/dollar could continue to race higher for now amid all this euphoria, it may have trouble breaking significantly above $1.25-1.26, especially since the ECB might go to battle to defend that zone. On a simpler level, the US economy seems much stronger than the euro area, which may dawn on investors before long.

There isn’t much to be cheerful about in the euro area. The economy is trapped in deflation, growth will likely remain soft for a while because of the prolonged lockdowns, and the ECB is almost out of firepower. On the bright side, EU leaders took a significant step towards a fiscal union in the midst of the crisis, but even that has been a painfully slow process. 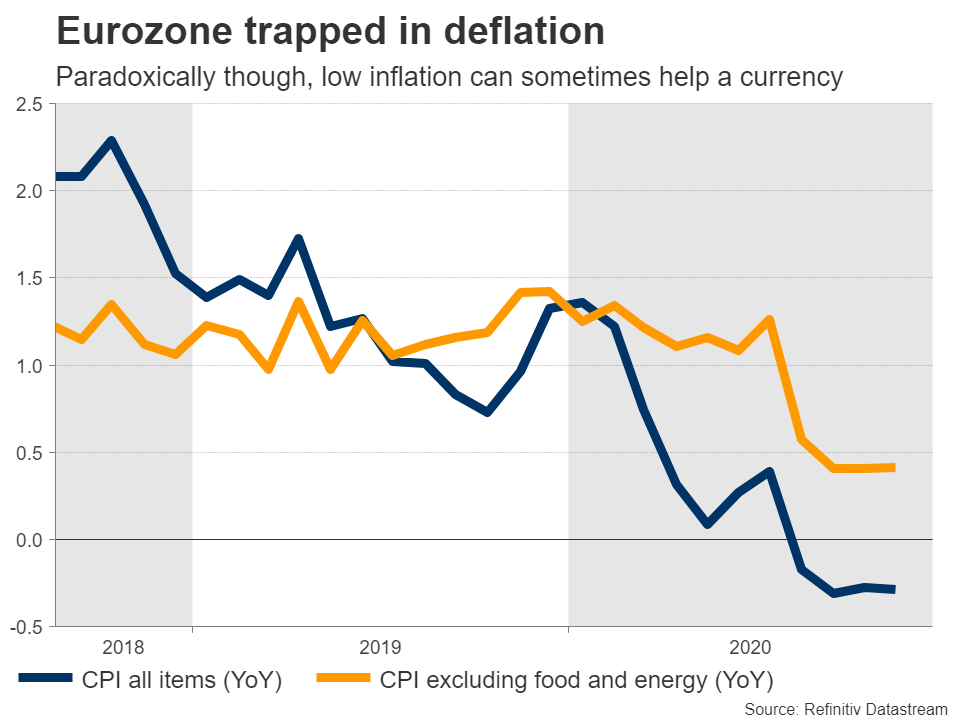 One might ask then, why the single currency has performed so well. One part is that the weak-dollar story was even more dominant. The other part is that because inflation is so low, real interest rates in the euro area have risen a little. The calculation for real rates is nominal bond yields minus inflation, so the lower inflation falls, the more real rates rise – assuming the ECB holds the policy rate steady. It’s paradoxical, but deflation can sometimes boost a currency.

Looking into 2021, the euro is widely expected to continue marching higher, supported by the global recovery boosting demand for its exports and capitalizing on a broadly weaker dollar. Alas, this assessment may be overly optimistic.

In short, the recovery remains fragile. With most European economies still in a lockdown, the early part of the year could be brutal, and the political appetite for massive stimulus has faded. Meanwhile, the US recovery is way stronger. And now that there is a super-covid strain loose in Europe, the euro area and Britain could be forced to play the rolling shutdown game until the vaccines are fully deployed, while America heals its economic wounds faster. 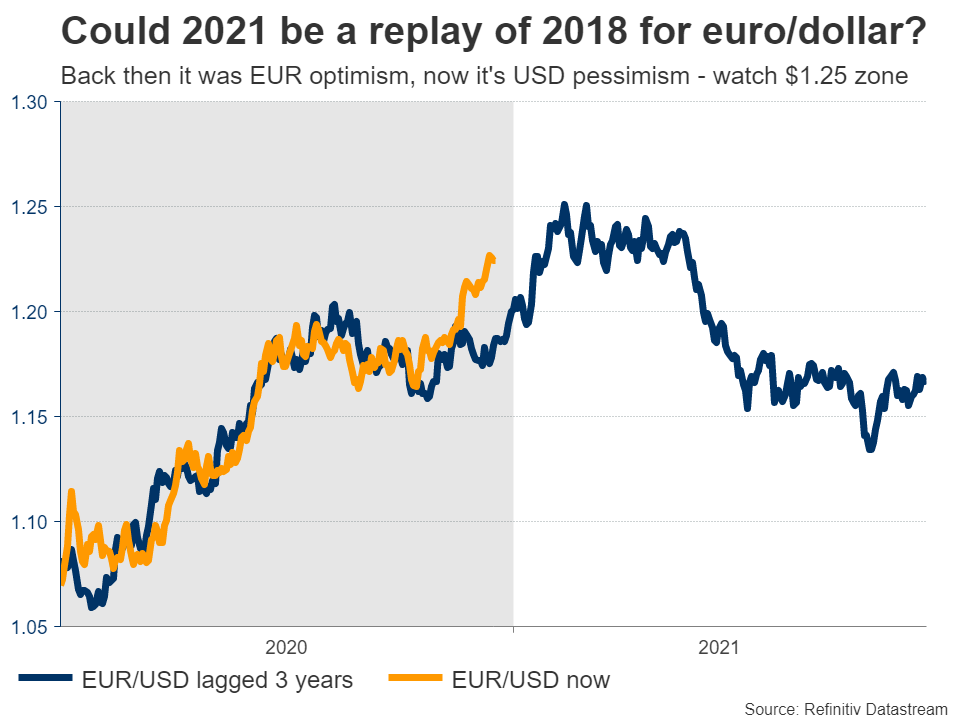 For now, the next wave in euro/dollar will likely depend on the Brexit conclusion. If a last-minute deal is reached, the pair could edge higher towards the $1.25 region. Ultimately though, relative economic performance is bound to come into play. If America once again proves to be a fundamentally stronger and more productive region, there could be a major correction in the pair, or even an outright reversal. Could it be 2018 all over again?

In terms of political events, the spot to watch will be the German election in September.

Sterling may get an early Brexit boost

Across the English Channel, the pound’s fate hangs on the outcome of the Brexit crusade. The final obstacle is fishing rights, which is a thorny political issue but insignificant economically. Fortunately, there has been some progress lately, with the UK offering the EU greater access to its waters. Even though Europe shot down this new proposal as insufficient, there is hope that this will serve as a stepping stone towards a real compromise.

It’s a close call, but a last-minute deal still seems like the most likely finale. Both sides are desperate to avoid a deeper economic shock, and it is difficult to imagine a deal falling apart because of fisheries of all things. If an agreement is indeed reached in the next few days when liquidity will also be scarce because of the holiday season, the pound could stage a powerful rally early in 2021. 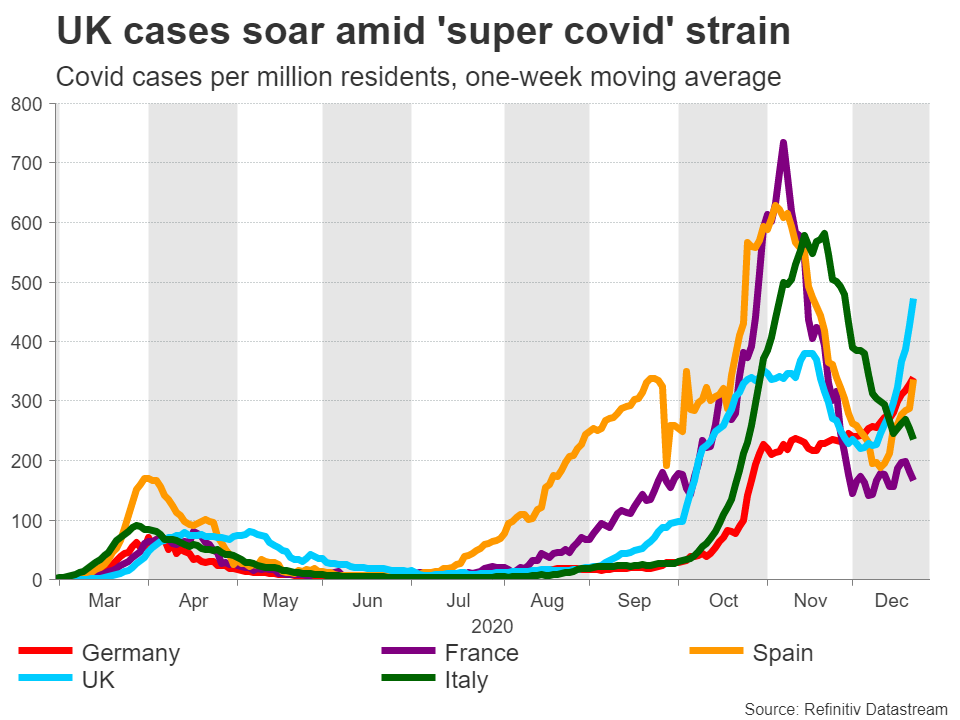 Looking further out though, once all the euphoria fades, everything will depend on the economic situation. Considering this new super-covid strain that is spreading like wildfire, will the nation remain in a light lockdown until the vaccines are fully deployed? If so, that means the hit on economic growth and public finances will be even greater, and speculation for more stimulus by the Bank of England would likely pick up, threatening any gains the pound enjoyed.

Yen: A prisoner of risk sentiment

The safe-haven Japanese yen was one of the weakest major currencies in 2020, second only to the dollar, as demand for defensive plays faded over the summer. With the Bank of Japan entirely out of ammunition, the yen’s path in 2021 will likely hinge on how global risk sentiment evolves. If expectations for a smooth global recovery come to fruition, the yen could continue to lose ground, especially against commodity-linked currencies that may benefit the most from the reflation trade. 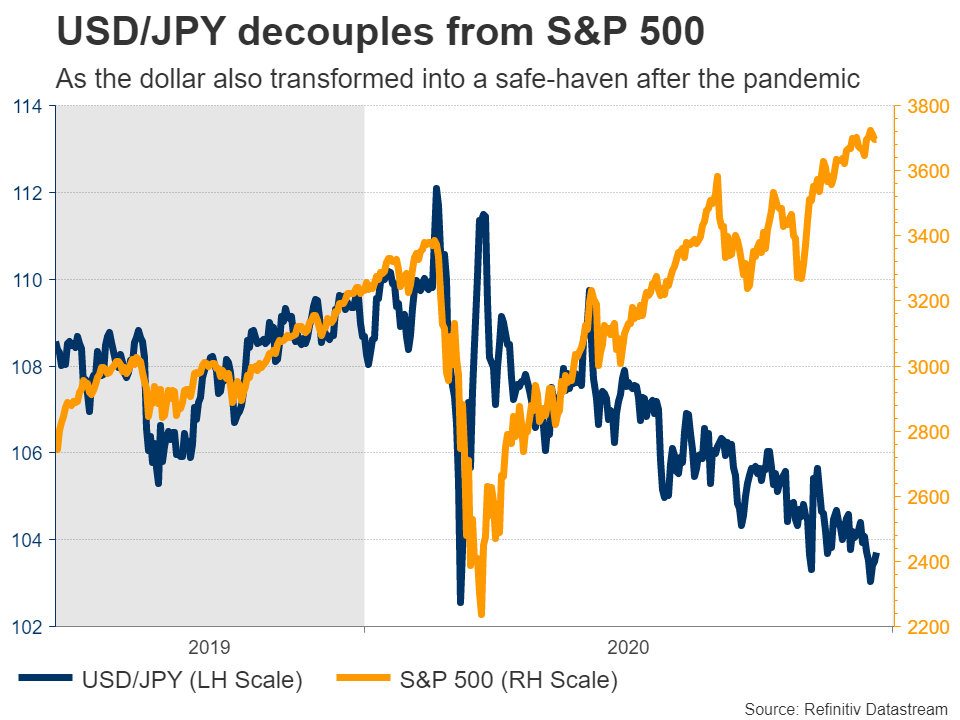 Since the Bank of Japan has a yield curve control strategy in place that keeps a ceiling on Japanese bond yields, the yen becomes less attractive in an environment where global yields are rising. Interest rate differentials are crucial for the FX market, so if foreign yields start climbing as the recovery gains steam but Japanese ones can’t participate, relative rates move against the yen and make it less appealing.

Like the yen, the direction of the commodity-linked Australian, New Zealand, and Canadian dollars will depend on the recovery’s pace. The bullish outlook for commodities could keep all three currencies broadly supported in 2021. None of their respective central banks is expected to act again, so the main element is how much further iron ore prices (Australia), oil prices (Canada), and dairy prices (New Zealand) can go from here.

That said, the outlook for some is brighter than others. For example, the aussie looks riskier than the kiwi. New Zealand was very successful in eradicating covid-19 completely, and combined with massive government spending and monetary stimulus, the economy has already recovered all its pandemic-related losses. 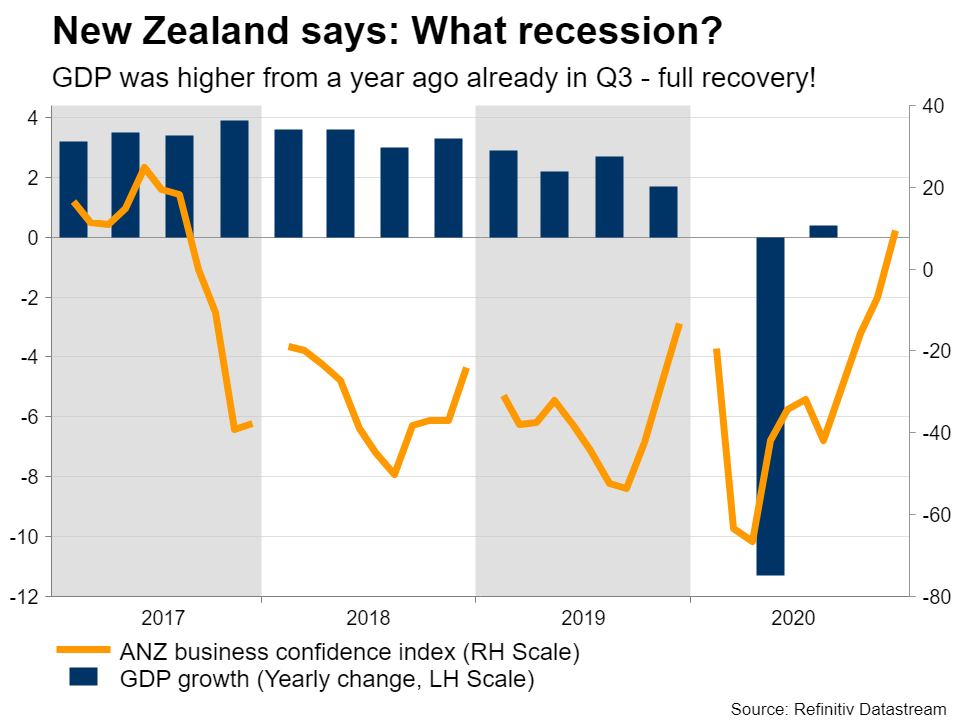 On the other hand, Australia hasn’t bounced back quite as powerfully, and the aussie will have diplomatic tensions with China to worry about in 2021. China slapped tariffs on several Australian products this year, after Canberra supported a global inquiry into the origins of the coronavirus. The aussie has been surprisingly resilient throughout this ordeal, but if this diplomatic brawl escalates further, it could have dire economic implications since around one third of all Australian exports go to China.

All told, the main variable that might dominate the FX market in 2021 is which economies recover faster. With interest rates around the world near zero, interest rate differentials are less significant, so relative economic performance naturally becomes crucial.

During the year of the bull, whoever grows faster probably wins.