Global yields catch up with US Treasuries; has the dollar’s rebound been thwarted?

A battle of the yields is underway as the returns on long-dated government bonds recover to pre-pandemic levels, undermining the allure of riskier assets such as stocks. The rally in bond yields is being led by US Treasuries, as the American economy shines the brightest in the Western sphere. However, while the US dollar got an unexpected leg up from the early stages of the surge in Treasury yields, the strengthening vaccine-led optimism is now spreading to other parts of the world, boosting yields globally. Does this mean the extreme bearish bets against the dollar late last year were justified, or is there hope yet for a full comeback?Turbo-charging the US recovery

Expectations that a super-sized fiscal stimulus package and an expeditious vaccination programme will turbo-charge the US recovery - fuelling inflation - have been running rampant since early January when the Democrats won the Georgia runoffs. The victory for the two Senate seats in Georgia was momentous because it handed the Democrats control over both chambers of Congress, making it easier for President Biden to push through his big spending plans.

Given that the next doses of stimulus will be delivered when the recovery is already on a fairly decent footing and the Federal Reserve on its part has pledged to maintain accommodative monetary policy for as long as needed, many investors have started to bet on an inflation revival – something that has been elusive since the Financial Crisis of 2008-09.

Rising inflation expectations can have a two-way effect on a currency. On the one hand, they lift rate hike odds in futures markets, boosting long currency positions. On the other, they negate the yield advantage stemming from higher nominal yields by depressing real yields, therefore reducing the attractiveness to hold that currency. For the dollar, falling real yields appeared to play a more important role in late 2020 following Biden’s presidential win when inflation expectations were edging up faster than nominal yields. 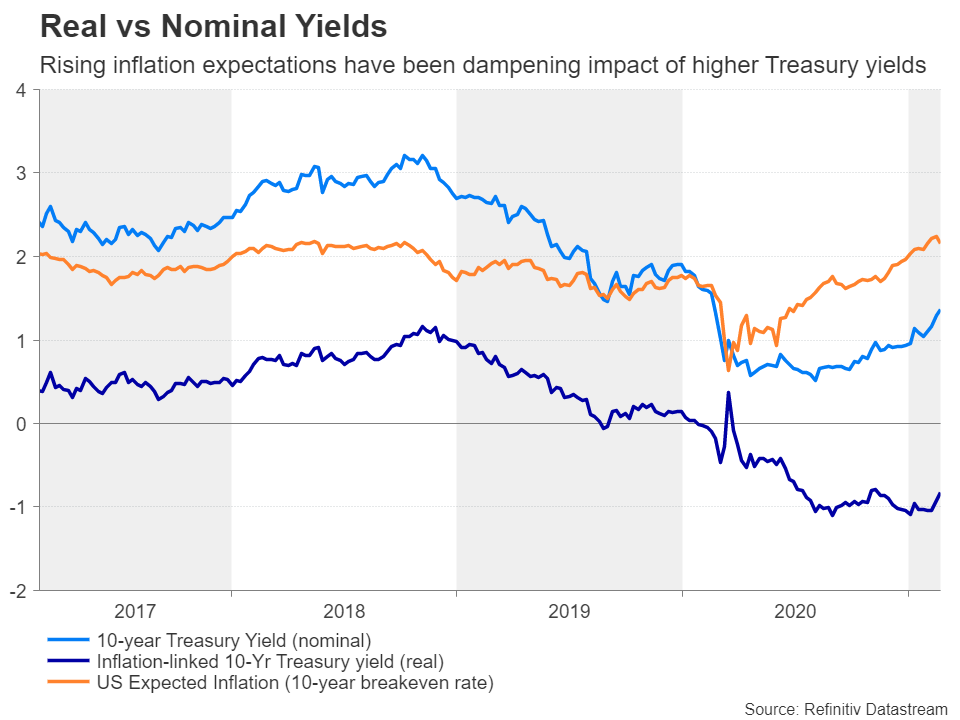 However, in January, the rally in Treasury yields completely took off, bringing an abrupt end to the dollar’s selloff, and the Fed’s efforts to curtail expectations of an early tapering in asset purchases were only able to temporarily hold down long-term yields. Yet now that nominal yields are rising faster than inflation expectations, the greenback’s rebound is faltering and the dollar index has breached its short-term ascending trendline.

US bond selloff spreads to other markets

One reason why the dollar has lost some of its bullish momentum is that investors have stumbled upon unexpected weakness in the labour market. Although the US economy is in overall good shape, a soft jobs market is just the excuse the Fed needs to stay very dovish. Prior to January’s uninspiring nonfarm payrolls report, markets were not so convinced about the Fed’s intentions to keep the stimulus taps wide open.

Nevertheless, US yields have continued to soar amid a record supply of new Treasuries in the bond market and growing optimism about America’s recovery. What’s changed this time for the dollar, though, is that sovereign bonds around the world have started to join the yield rally. The Australian 10-year yield is at its highest since May 2019, UK yields are climbing towards the March 2020 spike and Germany’s 10-year yield is approaching the June 2020 peak when Europe was emerging from the first lockdown.

Hopes that vaccines will spell the end of lockdowns and allow shuttered sectors of the economy to reopen are boosting the outlook for global growth in the second half of this year and next. Countries like Britain and the United States that got a head start in the vaccination race have seen their outlooks improve the most. But as inoculations are rolled out in more and more countries, with Australia and New Zealand only just starting their respective programmes, and supply constraints being slowly resolved, the focus is no longer on just the UK and US. Even the European Union is stepping its vaccination effort and investors are growing more confident by the day about the prospects for the world economy.

Further feeding the optimism is the huge injection of stimulus by both governments and central banks. With no prospect of this easy money drying out anytime soon, investors are having a field day. But all this is rippling through bond markets at a worrying rate as the global bond selloff on the back of the positive sentiment is pushing up yields towards levels last seen before the pandemic.

Risky currencies stand up to the dollar

The yields on 10-year Australian and New Zealand government bonds have risen the most so far this year, followed by Canadian ones. The Australian and New Zealand economies were already set to recover quicker, and now that vaccinations are in progress and there’s the added boost from surging commodity prices that should benefit exporters, it will be difficult for US yields to compete. Canada is in a similar boat, though its poorer handling of the coronavirus and over-reliance on the US for trade puts the loonie in a somewhat weaker position than the antipodean pair.

UK yields are the next biggest gainers. Sterling was the only major currency able to withstand the dollar’s bounce back in January as it basked in the glory of a done Brexit deal and the UK being the first Western nation to begin immunizing its population. This upbeat backdrop should hold for the rest of the year, but there are risks. For one, Brexit troubles are brewing again as the current deal is causing serious disruption to trade to and from Northern Ireland. Meanwhile, investors may be underestimating the possibility that the Bank of England maintains an aggressive QE policy far longer than ancitipated, which could weigh on gilt yields in the future. 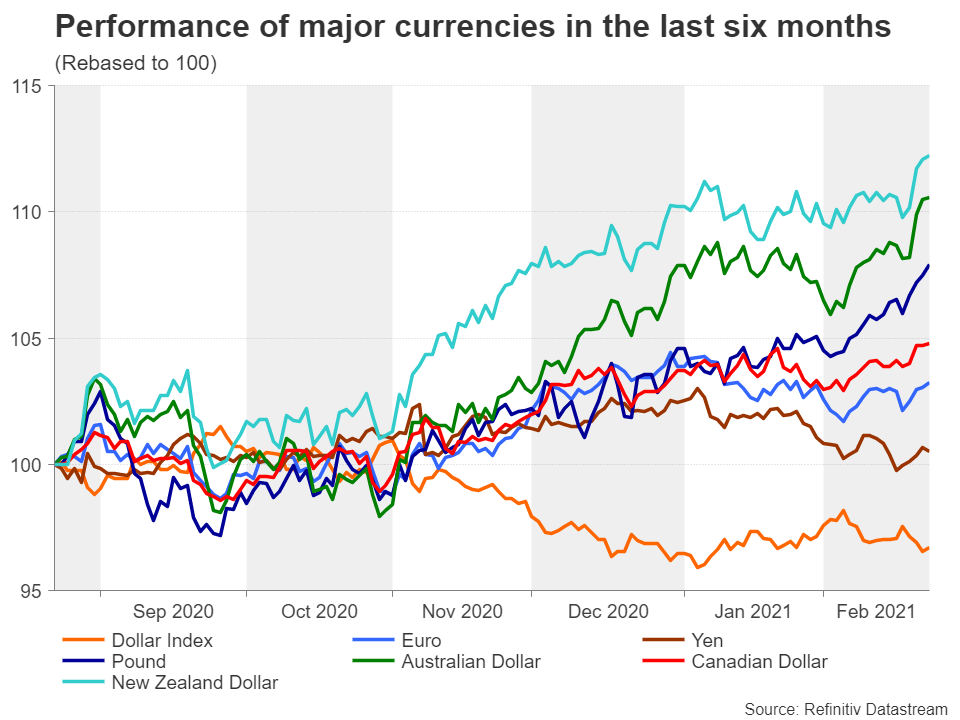 Trailing quite some way behind are the gains in German bund yields – the predominant yield for the euro area – which remain deep in negative territory. The Eurozone economy is unlikely to enjoy as speedy a recovery as its peers, based on the slow vaccine rollout alone. Additional stimulus by the European Central Bank is also doubtful even if inflation is less of a concern in Europe than it is in America. However, the ECB is still expected to stay accommodative far longer than the Fed, and with the deposit rate at -0.5%, there’s very little chance of German or Eurozone yields catching up with US yields in the foreseeable future.

This explains why the euro has been such a laggard this year. Though, with all the doom and gloom in Europe from the constant lockdowns and the EU’s vaccine saga, it’s easy to forget that the worst performing major in the year-to-date is in fact the Japanese yen. Japan’s recovery is coming along nicely and the country has one of the lowest death rates from the pandemic. But as far as the inflation picture is concerned, nothing has changed and the Bank of Japan is not about to ditch its yield curve control, which caps the 10-year yield at 0%.

Unsurprisingly, the yield on 10-year Japanese government bonds has barely budged even as other yields have soared. What is more interesting is that economic fundamentals are remerging as the biggest drivers for the dollar/yen pair as the greenback loses its safe-haven appeal and yields diverge. The most striking thing to note here is that dollar/yen has yet to cross below its recently formed uptrend line, unlike the dollar index. Could this be a sign that the dollar’s latest slide is a temporary setback? That is hard to say.

As things stand, there is no reason for the riskier currencies such as the pound and the commodity-linked dollars not to remain bullish. The euro and yen, however, could continue to struggle. The main variable that could change the existing dynamics is inflation. If inflationary pressures build up further over the coming months and higher prices are slowly passed onto consumers, that could lift Treasury yields even higher, reawakening the dollar bulls.

However, whether the Fed responds to higher inflation will depend on the scale of the increase. Fed officials have signalled they’d be happy to let inflation run as high as 3%. So if there is no threat to this threshold from an inflationary burst and any spike proves to be transitory, yields may not rise that much further and could even suffer a major pullback.

What is somewhat more certain in all this is that while it may not be possible for the dollar to build on its gains from earlier in the year, the current macro environment is not supportive of a dramatic plunge in the US currency. Hence, some choppy sideways action could be the eventual outcome of the latest market forces.