Britain and the European Union have just agreed on a post-Brexit relationship - including, of course, on trade - ending more than four years of uncertainty and political drama. However, with negotiators having less than 12 months to strike a deal, it was never going to be possible to achieve anything more than a bare minimum accord. Thus, those hoping that the world can now finally move on from the Brexit soap opera may be disappointed to learn that there is still much to be resolved. While future behind-the-scenes negotiations will probably no longer attract front-page headlines, a lot remains at stake, especially for London’s lucrative financial services industry. The ‘thin’ deal has left pound traders underwhelmed as the currency had already rallied in anticipation of a basic free-trade agreement.So what’s in the deal?

Both sides claimed victory following the announcement of the historic agreement between the United Kingdom and the EU on Christmas Eve. Prime Minister Boris Johnson was quick to point out the wins for his negotiating team: tariff- and quota-free trade, ability to diverge from EU environmental, social and labour standards, leave the jurisdiction of the European Court of Justice, establish own regime for state aid, and reclaim control of the UK’s fishing waters and borders.

Hence, on the face of it, Johnson appears to have stood firm on his red lines and the concessions won by the UK outnumber those of the EU. However, all of those ‘wins’ come with caveats when looking at the fine print. For example, on environmental, social and labour policies, although the UK will be able to set its own rules, the EU will have the power to slap tariffs if it deems Westminster is unfairly gaining competitive advantage by diverging significantly from the bloc’s own practices.

As for the politically sensitive issue of fishing, the 25% reduction in the quota for European fish caught in British waters is far below the 60% that the UK had been demanding at the start of the negotiations. The UK did, though, manage to bring down the phasing in period to five-and-a-half years from ten. Regardless, fishermen on both sides potentially face endless uncertainty as the agreement requires that once the transition ends, there will be annual discussions to decide fishing access.

But the pact on fisheries isn’t the only one that’s not set in stone. The agreement on the level playing field will also be up for review (after four years), and in addition, either side will be able to initiate a review if they are unhappy about how standards are being applied, which could lead to the imposition of tariffs in response to any disputes.

However, the regular reviews can work both ways, as they leave the door open to the possibility of the existing agreements being improved and upgraded upon. Brexiteers would argue that this ‘reset’ of the UK-EU relationship would ensure that more favourable terms can be agreed in the future, even if that involves a significant ‘downgrade’ in the interim to get there. But until a more permanent arrangement has been forged, which could take decades, businesses potentially face many more years of uncertainty as the current deal could blow up at any moment.

Highlighting just how ‘unfinished’ the deal is, there are several areas where the two sides could only reach temporary arrangements to allow more time for negotiations. These include data sharing, aviation, the question of Gibraltar, and most important of all – financial services. Britain has a huge trade surplus in services and the City of London has benefited greatly over the years from access to the single market via the passporting scheme. But many financial services firms will no longer be able to do business in the EU from January 1, 2021 when they lose their passporting rights, instead relying on a system known as equivalence. 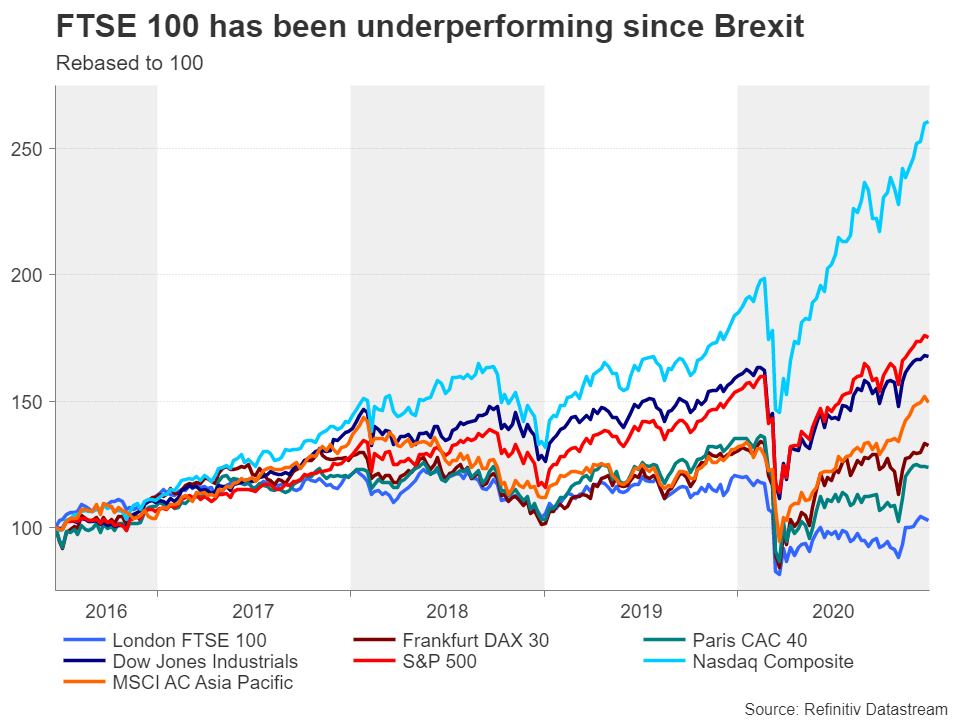 However, equivalence does not cover all types of financial services and it is up to individual member states to decide if they want to grant access to UK firms. Moreover, equivalence decisions can be withdrawn with 30 days’ notice, so it’s far from an ideal solution.

On the bright side, the UK and EU have set a deadline of March 2021 to reach a Memorandum of Understanding on broader cooperation on financial services. Plus, the big City banks have already opened branches in European financial centres such as Paris or Frankfurt, hence, any disruption may be minimal and brief.

Pound unimpressed by Brexit accord

Nevertheless, despite the huge relief that a deal is finally done and the threat of a chaotic Brexit is averted, the UK-EU Trade and Cooperation Agreement (TCA), as it is officially called, could look very different from its current form in a few years’ time. That could be one reason why traders have greeted the long-sought deal with barely any enthusiasm. The pound rose only modestly on Thursday when it seemed certain an announcement was imminent, and slid on Monday on profit taking as there was not a lot in the details that hadn’t already been priced in by investors.

Sterling’s pullback against the US dollar is likely to be a short-term correction following an impressive run higher since late September. If cable continues to lose ground, it may find support in the $1.33 region, which lies between the 50-day moving average and the 78.6% Fibonacci retracement of the September down leg. Breaching this support would bring into scope the 61.8% Fibonacci of $1.3173.

Making a success of BrexitNow that Brexit has been completed, the key focus for sterling in the next three to six months will be how soon the pandemic eases and how quickly vaccines are rolled out to bring about a stronger economic recovery. However, its longer-run prospects may be tied to whether the TCA eventually becomes more comprehensive and how many trade deals Britain signs with non-EU countries, as the real test of making a success of Brexit has only just started.