As usual, the earnings parade starts with the biggest US banks. Following an encouraging release from JPMorgan, the focus will turn to Bank of America, Citigroup and Wells Fargo on Thursday, and Goldman Sachs on Friday. The lacklustre growth in profits in the first half of the year is expected to cool down further and a more careful guidance could press sentiment, though the macroeconomic outlook will probably remain favourable for the banking sector, maintaining support under the 2021 stock rally. The consensus recommendation from I/B/E/S Refinitiv analysts is buy.US banks stay afloat despite pandemic

US non-performing loans have been less thorny than initially thought at the start of the pandemic, and while the banking sector was usually the big elephant in the room during the previous recessions, it heroically stood tall during the ongoing health crisis despite the harsh 2020 lockdowns and the steep cut in the Fed’s fund rate.

The bulk of the gains originated from investment banking activities as dealmaking in merger and acquisitions soared and business in equity markets boomed on the back of the Fed’s massive asset purchase buying and the government’s wide spending pipelines. Fees earned from banking behemoths crawled up to a record high of $112.6 billion so far this year, while car and home lending was still up 60% from the pre-pandemic Q2 2019 despite a moderate pullback this year.

Analysts expected a moderate buildup in loan provisions, but confidence in the economy allowed JPMorgan release extra $2.1bln in reserves in the third quarter, which were set aside for the rainy days. Company’s profits further slowed to $11.7bln from $11.9bln in Q2 and $18.24bln in Q1, but still managed to smash expectations and stand well above the $9.4 reading registered last year.

Income from fees and commission surprisingly pulled down.

Turning to the upcoming banking releases, net income is expected to have further fallen for Bank of America and Wells Fargo, while Citigroup could witness its first slowdown.

On the revenue front, besides Bank of America, which has probably continued to benefit from its global wealth and investment management activities, Citigroup and Wells Fargo may also report a minor annual contraction in revenue.

A slight normalization in performance would not significantly dampen outlook for US banks as this could be an outcome of fading base effects. However, investors could still identify some bright spots to remain confident in the financial sector. Net interest income is expected to return to growth territory for Bank of America for the first time since the end of 2019, while earnings per share may also remain solid above 2020 readings despite a potential slowdown.

Apparently, the widely discussed pandemic-led constraints in business operations, the shortage of labor, and the inflation spikes will eat into consumers’ pockets, sending some negative spillovers to bank lending. Hence, executives may provide a more cautious guidance to acknowledge risks in the financial sector. 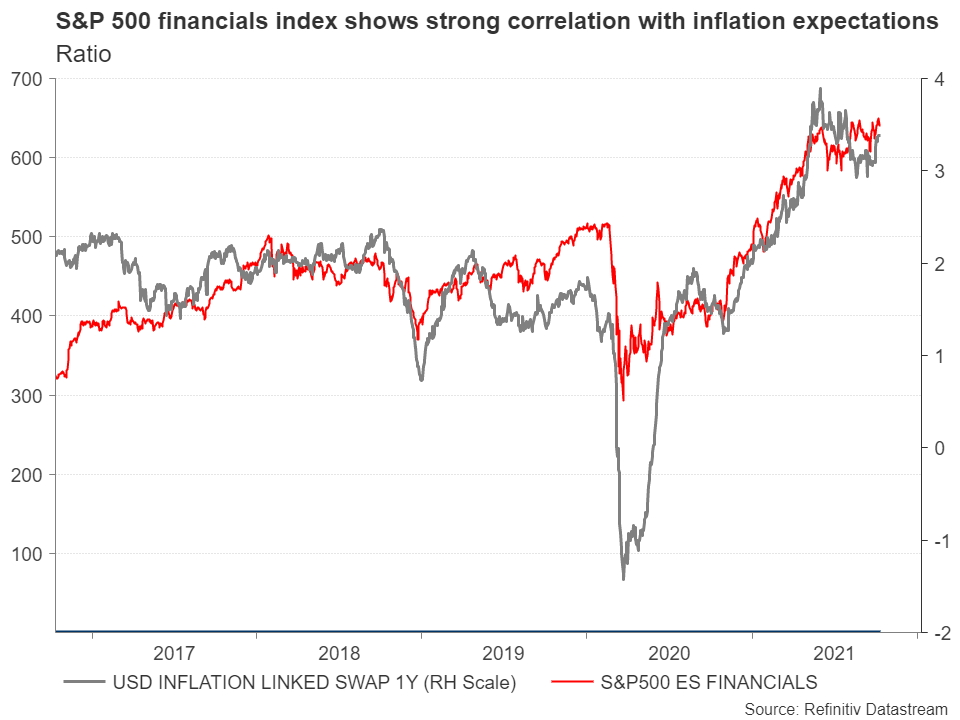 As regards performance in stock markets, a more proactive and careful guidance could bring a pullback to bank stocks. That said, bank valuations remain near the industry's average and cannot compare to the extreme valuations in other sectors. Also, with Fed policymakers seeing an upward march in interest rates in late 2022 and 2023, Treasury yields ascenting higher and inflation expectations picking up steam, there is still some reason to be optimistic that banking returns will improve.

Perhaps, rate hikes could come at a gradual pace amid the uncertain times of the health crisis, though expectations of higher borrowing costs could still cement support under banking stocks, unless the Fed changes course to the dovish side. 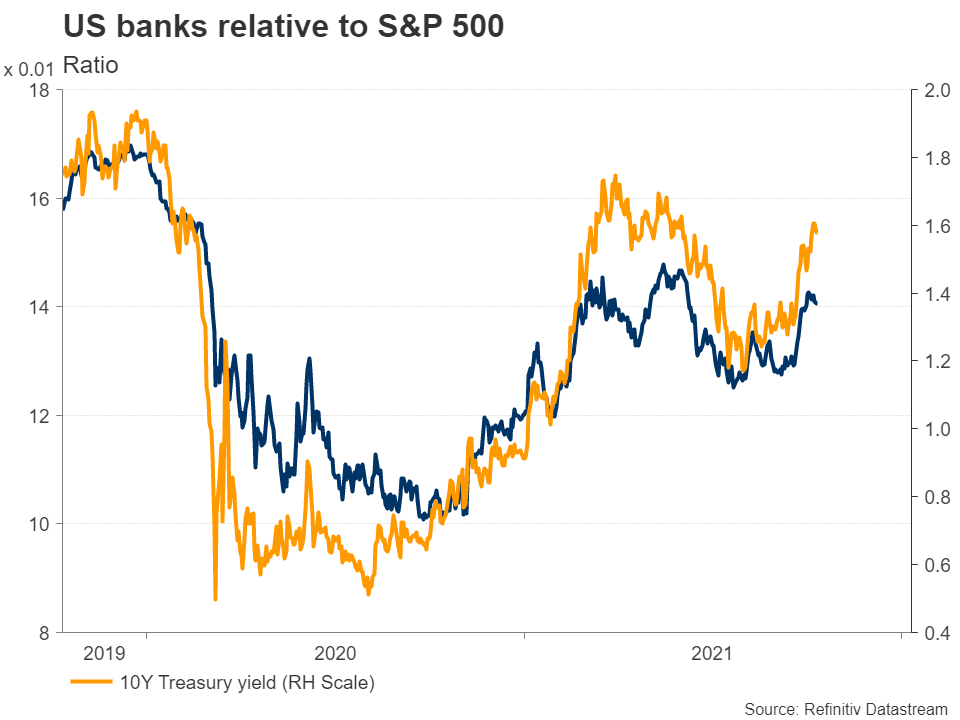 Looking at the S&P 500 index, JPMorgan's robust earnings results could add some support under the S&P 500 today, but from a technical perspective the downtrend from the record high of 4,545 leaves the index exposed to the 4,300 support area. Should the index close below 4,255, the door would open for the crucial 200-day simple moving average (SMA) at 4,160.

Alternatively, if more banks appear less worried than investors estimate in the coming days, traders will look for a close above the 20-day SMA at 4,386. Such a move could push the index up to the 4,460 resistance region, a break of which could set a new battle near the record high of 4,545.