The world’s most valuable company will release its earnings report after Wall Street’s closing bell on Wednesday. Analysts expect another blockbuster quarter as consumers cannot get enough of the new iPhones. Besides earnings, the guidance by the firm’s executives will also be crucial for Apple’s stock, which has already shot to new heights in anticipation of stellar results. Valuation is becoming an issue, but that’s also the case for almost every quality stock. It’s good to be king

High quality companies with great products, clean balance sheets, strong management, and a super-loyal customer base don’t come by often. But when they do, they take over.

The California-based tech titan is expected to report earnings per share (EPS) of $1.41 during its fiscal first quarter, which would mark a 13.1% increase from the same quarter last year. Revenue is expected to clock in at $103.3 billion, a jump of 12.5% over that period. This would be the strongest quarter ever in terms of revenue.

Sales of Macs and iPads are expected to have soared amid the stay-at-home crisis, though the biggest revenue earner is still the iPhone by far, accounting for more than half of total sales. Recent reports suggest the new iPhone 12 generation sold much better than expected, especially in China, feeding speculation for a record-breaking quarter.

Apple has a strong history of beating earnings forecasts, having done so in all six preceding quarters. If history repeats itself, the stock could climb beyond the all-time high of 145 into unchartered territory. In this case, resistance may be found near round psychological numbers, such as $150 and then $160, the latter also being the 161.8% Fibonacci extension of the September pullback.

On the other hand, if the numbers fall short of the high expectations on Wall Street, initial support may be found near previous record time of 139.85. If it fails to hold, the inside swing low of 132.6 could attempt to slow the bears, before a more formidable support region around 126.30 comes into play.

It’s safe to say that Wall Street is expecting a strong beat judging by the recent price action, so anything short of stellar numbers could be met with some disappointment.

Beyond the numbers themselves, the comments from the firm’s management during the subsequent earnings call with analysts will also be crucial. The executives will be questioned on their expectations for the coming quarters, and their answers could determine whether the initial reaction persists or reverses.

One crucial area will be how they expect sales to evolve once the pandemic truly winds down. If the crisis boosted Apple’s sales as people worked from home, do they expect a slowdown as the broader economy reopens? Additionally, are they concerned about the Biden administration imposing new regulations or raising taxes on the tech industry? And how big of a risk is the recent showdown between China and Taiwan for Apple’s supply chain?

Valuation getting pricey, but what isn’t?

In the bigger picture, valuation is becoming an issue. Let’s look at a simple valuation metric, the forward price-to-earnings ratio. This number denotes the dollar amount someone would need to invest to receive back one dollar in annual earnings, so the higher it is, the more ‘expensive’ a stock is considered.

Apple’s currently rests at 33.6x, which is far lower than the overall technology sector, but more than double what it was historically until 2019. The company also trades at 7.2x forward sales, which is quite expensive too. Hence, a lot of optimism has been baked into the cake, leaving little room for error. 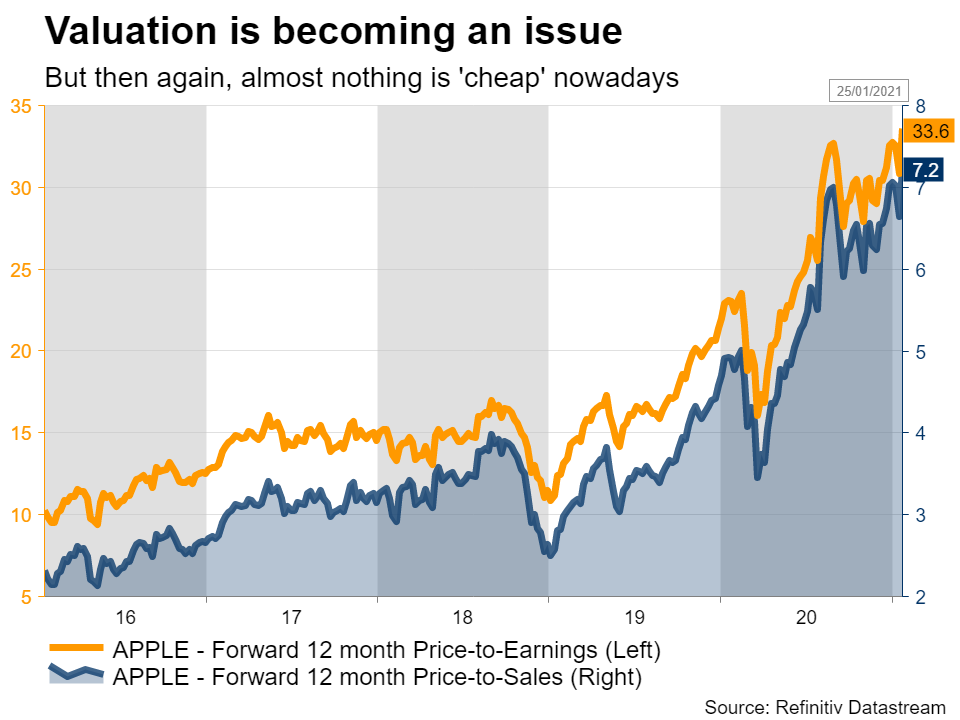 A company trading at such multiples makes more sense when it is young and investors are excited for the future, but when it is already the biggest company on the planet, it is difficult to maintain the exponential growth needed to justify it.

But perhaps the bigger question is, how much do valuations matter anymore? With bonds having turned into a negative-yielding asset class, investors are forced to pile into stocks, which at least still provide positive returns. From this angle, high quality names like Apple that still have promising growth prospects may deserve the premium they trade at, simply for a lack of alternatives.

With Apple, investors can at least take solace in the fact that the world’s biggest company isn’t going anywhere and will emerge even stronger from this crisis.