Apple Inc. is poised for another stellar quarterly performance on Wednesday when it reports its earnings after Wall Street’s closing bell. While revenue is expected to have declined from the previous holiday quarter, Apple’s fiscal second quarter should still reflect strong year-on-year growth, amplified by last year’s pandemic effect. Healthy demand for its broader product and services offerings could support the share price if iPhone sales slow more than expected. However, it is the Company’s plans on dividends and share buybacks that investors will be most paying attention to.Revenue boost from strong lineup

After exponential growth in revenue following the launch of the very first iPhone in 2007, Apple has matured into an established player in the tech and digital world. Hence, double-digit earnings growth is no longer a common phenomenon for the Cupertino-based company. Nevertheless, Apple’s recent efforts to upgrade its existing product line-ups and expand its services portfolio have helped it boost revenue from other sources, reducing its reliance on the iPhone series. The pandemic has also been positive for sales as the stay-at-home culture has encouraged more people to buy a Mac or sign up to one of Apple’s many subscription services such as Apple Music, Apple TV+ or Apple Fitness+.

All this, plus of course the launch of the iPhone 12 series during the all-important holiday season, helped the Company post record revenue of $111.44 billion in fiscal Q1. The strong growth run likely extended into fiscal Q2. According to data by Refinitiv IBES, analysts expect revenue to have soared by 32.4% year-on-year to $77.20 billion. Earnings per share (EPS) are estimated at 99 cents, which would represent a whopping 54.6% increase over the same quarter in 2020. 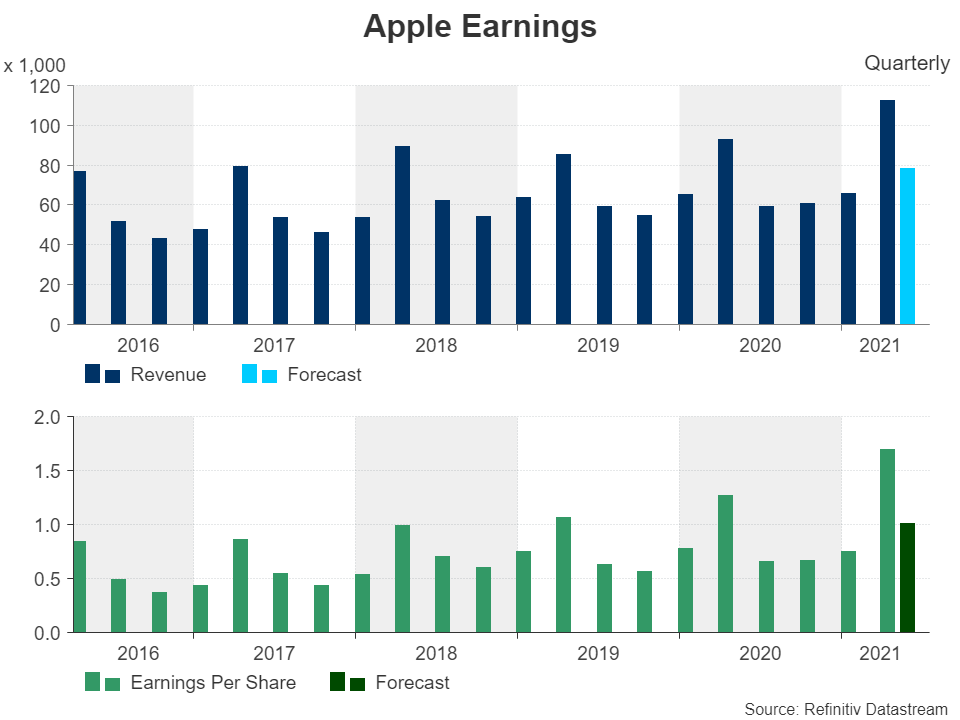 Not a good year for Apple shares

But despite the impressive rebound in earnings after several sluggish quarters in 2019 and 2020, analysts remain concerned about the Company’s long-term growth prospects. Apple’s share price has been underperforming this year amid reports that iPhone 12 sales have lost momentum, particularly for the iPhone 12 mini. 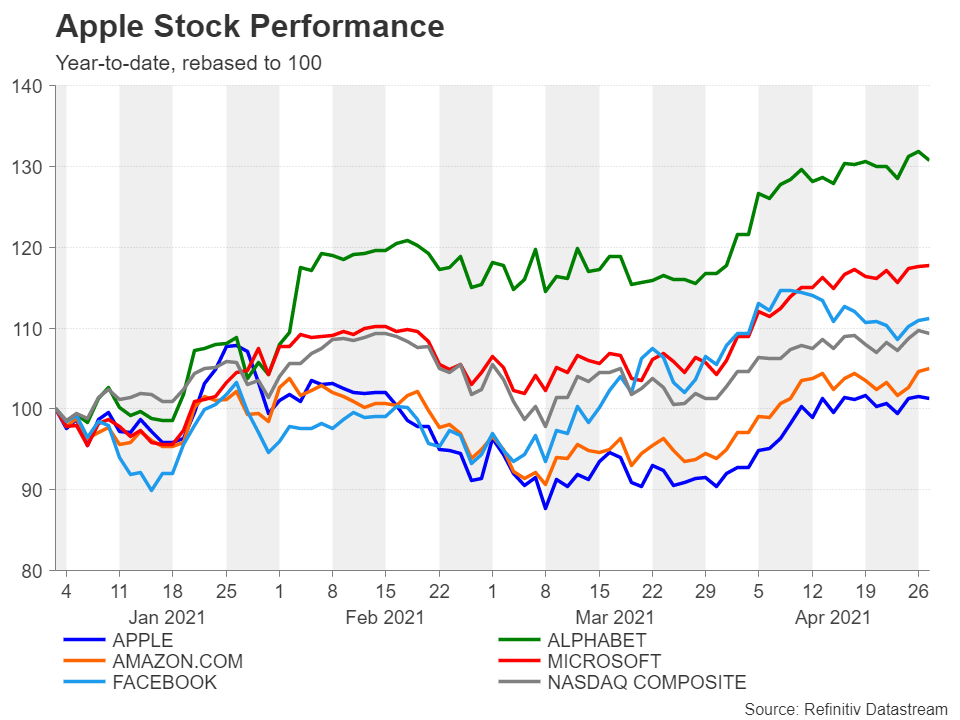 However, it’s possible investors have become overly pessimistic about the smartphone division and the Company may yet beat sales expectations. Sales of Mac products and iPads as well as subscriber numbers for Apple’s services could also surprise on the upside. But would it be enough to lift the stock?

Apple is already viewed as more of a cash cow than a fast-growing tech firm so as long as there are no big disappointments in the earnings announcement, investors will be more preoccupied by what the Company has to say about its share buyback and dividend plans. If Apple decides to reward shareholders with a huge cash return in the form of increased stock buybacks and higher dividend payments, the share price would probably jump higher.

Apple stock has been hovering around the 61.8% Fibonacci retracement of the January-March downtrend at $134.06 over the past couple of weeks. A break higher would bring January’s all-time high of $145.09 back into scope. Should the stock rally into unchartered territory, the 161.8% Fibonacci extension of $162.94 could be eyed next.

However, if the Company decides not to raise its dividend and share buybacks, the stock could reverse lower. Unexciting sales growth and the absence yet again of revenue guidance for the next quarter could also knock the stock down. Should that happen, the 50-day moving average slightly below the 38.2% Fibonacci of $127.24 should provide support. But if that fails, prices could soon be headed for the March trough of $116.21.

Fundamentals remain solidAlthough Apple’s share price is up just over 1% in 2021, it has a similar valuation to its peers from a price/earnings perspective and therefore not particularly more attractive. However, its strong balance sheet and cash flow mean it remains a good investment and analysts are maintaining their ‘buy’ recommendation for the stock.