Apple Inc. is due to announce its earnings results on Tuesday after the close of trading on Wall Street. Having managed to not only notch up positive year-on-year revenue growth during the pandemic, Apple has also been posting record earnings per share, catapulting its stock to an all-time high of $150 earlier this month. Expectations for the June quarter – Apple’s fiscal Q3 – are running high on speculation of solid demand for its product line-up. However, with revenue estimates steadily edging higher in the runup to the earnings call, have investors become too optimistic?Revenue jump eyed as stock surges on increased orders

Bloomberg reported a couple of weeks ago that Apple has ramped up production orders for the upcoming iPhone 13 with its suppliers by as much as 20%, fuelling a frenzy in its share price, which hit a new record high of $150 on July 15. However, it’s worth pointing out that up until June, Apple stock had been underperforming the broader S&P 500 and even after the latest gains, many investors think the rally still has room to run. So are they right?

Well, revenue forecasts are certainly encouraging. The Cupertino-based company is expected to report $74.11 billion in revenue in Q3 according to Refinitiv IBES data. This would be up an impressive 24.2% compared to the same period a year ago but more than 17% lower from the prior quarter. However, the quarter-on-quarter comparison will likely be skewed by last year’s delay in the launch of the iPhone 12. Moreover, all the indications are that the pandemic-related boost to demand for tech products and digital services persisted in the three months to June, lifting sales of not just the popular iPhone but for the iPad and Mac too, as well as for Apple Services such as Apple Music and Apple TV+. 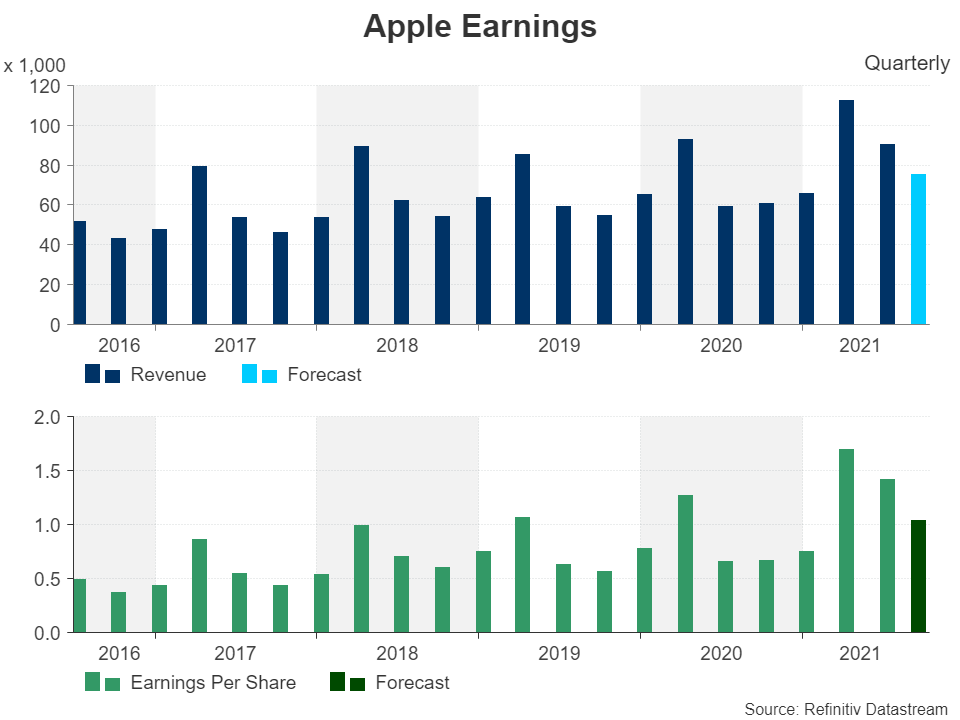 Should Apple deliver better-than-expected results, the bulls are likely to challenge the all-time high of $150 before targeting the 123.6% Fibonacci extension of the January-March downleg at $151.91. In the event of a sharper rally, the 161.8% Fibonacci of $162.94 would be the next key resistance area.

However, if the Company’s earnings fail to excite investors, the July trough of $141.67 would come into focus again before sellers eye the 78.6% and 61.8% Fibonacci levels at $138.91 and $134.06, respectively. The 61.8% Fibonacci also happens to be in close proximity to the 50-day moving average, making the $134 region a potentially important support base.

One big risk for Apple stock is that investors may be underestimating the impact of supply constraints on Q3 and future earnings. Chip and other component shortages are rife in the tech industry and could act as a major headwind to sales even if demand is robust. Supply problems could even be the primary reason why Apple bumped up production orders with its suppliers – to reserve more components for itself and minimize potential disruption to iPhone production.

If investors get a sense that this was behind Apple’s output boost rather than an expected rise in demand, the stock would be in danger of a major cooling off period.

Another risk ahead is the Company’s long-running regulatory and legal headaches, ranging from anti-competitive complaints to patent infringements, the latest being on how much control Apple has over third-party developers’ apps on the App Store.

However, despite these troubles, Apple is still seen as an attractive bet with no sign yet of the huge popularity in its products waning anytime soon. Hence, analysts are maintaining their ‘buy’ recommendation for the stock, setting a median price target of $161.00. 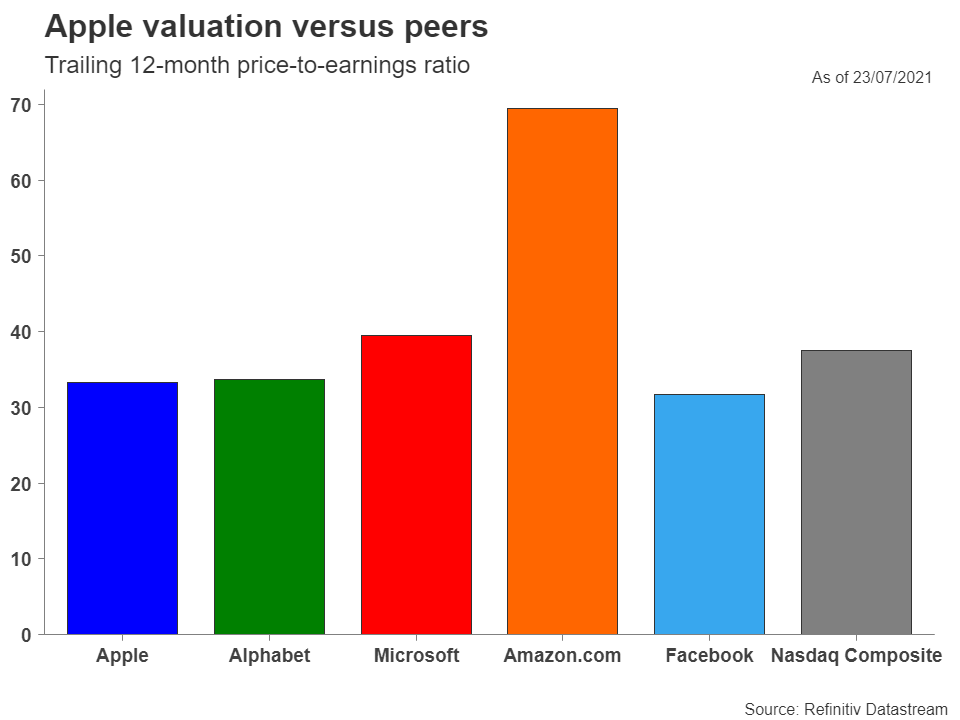 From a valuation perspective, Apple has a pretty hefty trailing 12-month price-to-earnings (PE) ratio of 33, though many investors would argue that this is reasonable given its very strong cash flow. The PE is also comparable to those of its peers such as Alphabet and Microsoft, and slightly below the average of the Nasdaq Composite.

The sky-high valuation is likely to again be overlooked by traders should Tim Cook, Apple’s CEO, sound upbeat about the next quarter even if he stops short of providing full guidance.