The world’s largest company by market cap will release its latest results on Thursday after Wall Street’s closing bell. The stakes couldn’t be higher as Apple’s shares have risen almost 30% this year despite falling earnings, so a lot of ‘hope’ is already priced in. Has the stock run too far ahead of fundamentals and is a reality check in order? Beyond its own shares, Apple’s results – and those of Amazon, Facebook, and Google on the same day – could shake the entire market, given their enormous size. Falling earnings, little guidance

The California-based tech juggernaut is expected to report earnings per share of $2.04 for the quarter ending in June, which would represent a 6.5% decline from the same quarter last year. Similarly, revenue is forecast to drop by 3% from a year ago, indicating that Apple is not entirely immune to this crisis.

Typically, one would argue that although the numbers seem bad, the reaction in Apple’s stock will depend mostly on the guidance by the firm’s management for the coming quarters, not on the figures themselves. Alas, we are unlikely to get concrete guidance this time due to uncertainties related to the pandemic, so the results might matter more than usual. 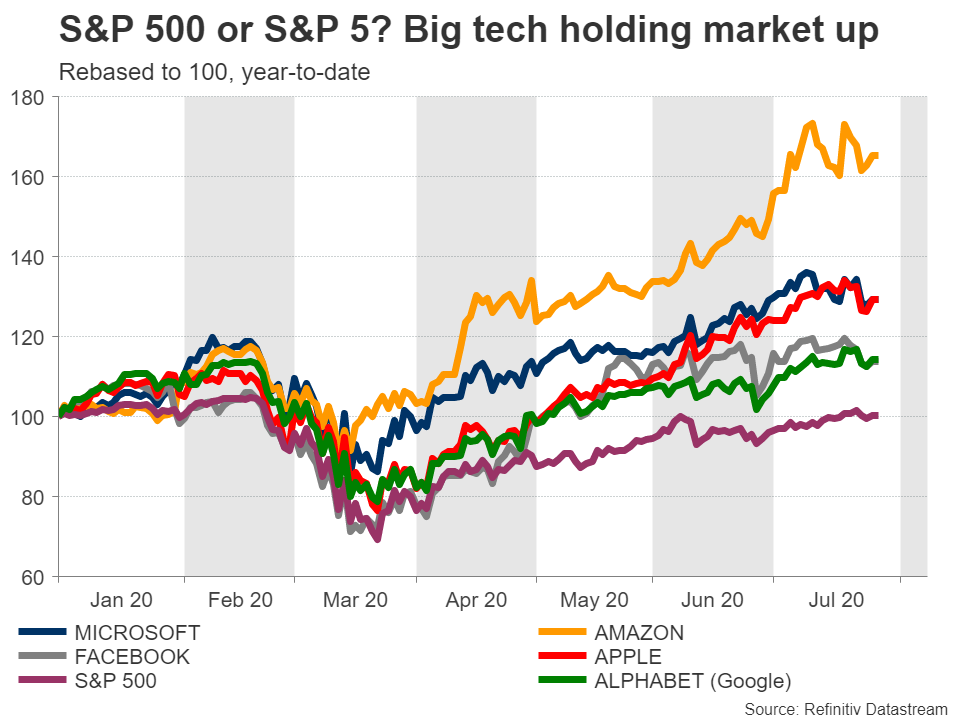 If the executives do provide guidance, investors will be most interested on any updates about the new iPhone that is expected to be released this fall. Specifically, there are rumors it might be delayed, a confirmation of which might spell trouble for the high-flying stock as iPhone sales are still the company’s biggest revenue stream by far.

Indeed, much of the revenue decline this quarter is projected from waning demand for iPhones, though that may be partially offset by Apple’s services business, which is growing faster now that consumers are spending more time at home.

Another theme that caught the market’s eye lately was that Apple is under investigation by multiple US states about ‘deceptive trade practices’. Not much detail has been made public yet, so it will be interesting to see if the executives provide any clarity, as regulatory risk might not play well with investors.

The flare-up in US-China tensions may be another hot topic, as China accounts for roughly 20% of Apple’s revenue.

While all of these are minor issues by themselves, what makes the overall situation truly worrisome is how sharply Apple’s stock has rallied. These gains came despite a fall in earnings, meaning that the stock has become more ‘expensive’. It’s currently trading at 26x forward earnings, which is almost double its long-term average.

In other words, a lot of optimism has been priced into the stock. Investors are betting that this is just a small bump in the road and that the company will quickly get back to its old ways. Only time will tell, but for now, this rosy outlook leaves a lot of room for disappointment if anything goes wrong. 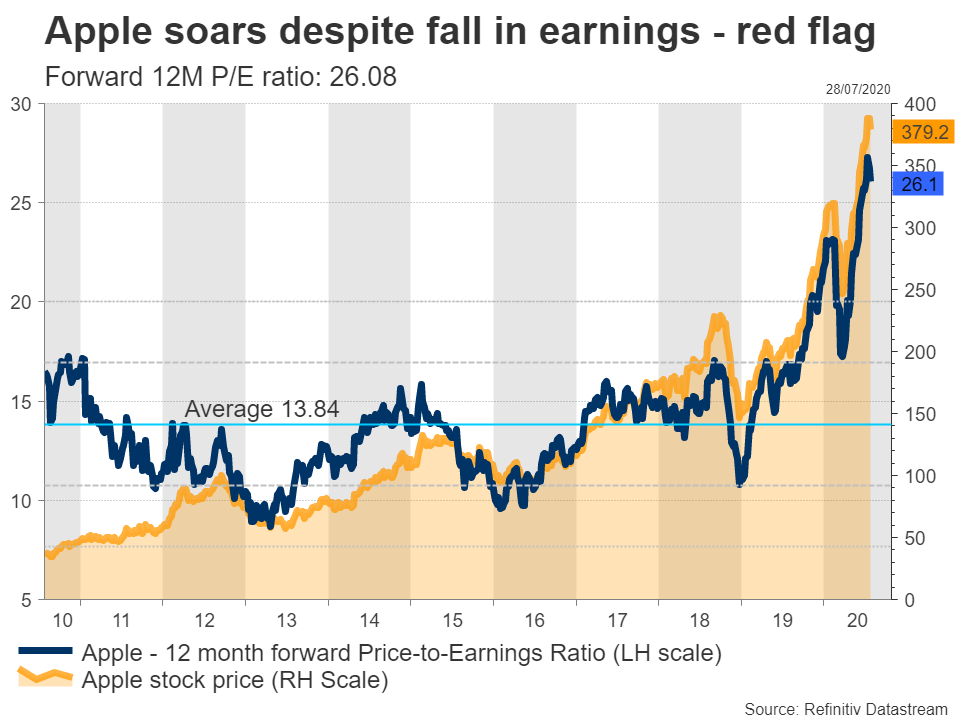 In fact, that’s what happened to Microsoft last week. Even though the company easily beat its earnings forecasts, the stock still tumbled on a ‘sell the news’ reaction, as so much optimism was priced in ahead of the event.

Beyond Apple – beware of market concentration

To be clear, all this doesn’t mean Apple has lost its magic. It’s still a great company with a loyal customer base, a healthy balance sheet, and a strong management team – all of which implies it has a bright future. It’s the market that may have gotten ahead of itself.

Beyond its own stock, Apple’s earnings could also have a huge impact on the entire market. In recent years, the biggest 5 companies on the S&P 500 – Apple, Microsoft, Amazon, Google, and Facebook – have captured a bigger and bigger share of the index, and today, they account for roughly 23% of the entire S&P 500.

This also explains why the S&P is basically flat on the year. Most stocks are still down, but ‘big tech’ firms are up so much that they drag the entire market higher. Sadly, this implies that any weakness in these 5 giants going forward could take away the leadership of this recovery, and by extension drag the overall market down. Hence, this will be a decisive week as Amazon, Facebook, and Google also release their results on Thursday.

Taking a technical look at Apple shares, a potential pullback could meet initial support near the 356.5 zone, which also encompasses the 50-day simple moving average (SMA) at 352.3.

On the upside, a move back above 383.4 could open the door for another test of the recent record high at 399.8.