Apple’s earnings: Much is at stake – Stock Market News

The world’s most valuable company will release its quarterly results after the market closes on Thursday. The stakes are high as Apple’s shares have risen by 57% this year even as earnings fell, so a lot of optimism about the future has been baked in. Amazon, Facebook, and Google will also report on the same day, and given how much weight all these tech giants have in indices like the S&P 500, their results could rock the whole market, not just their own stocks. Falling earnings, rising shares

The traditional rules of finance continue to ‘bend’ in 2020, as the rationale that a stock price cannot flourish without rising earnings has come under fire. The renowned iPhone maker is expected to report earnings per share (EPS) of $0.71 for the quarter ending September, which would mark a decline of 6.6% from the same quarter last year. Revenue is expected to have risen over that period, but only by a marginal 0.2%.

And yet, the company’s stock price has skyrocketed this year. The explanation behind this ‘strange’ phenomenon comes down to three core elements: high hopes about the post-pandemic outlook, the timing of when Apple’s latest products were released, and the effect of rock-bottom interest rates.

The argument is that even though earnings will take a hit now, the company is not going to be crippled and will emerge from the pandemic even stronger than before. Hence, investors are ‘looking through’ the short-term pain and are betting that the shift towards online activities will push more consumers into Apple’s ecosystem and ultimately lift earnings. 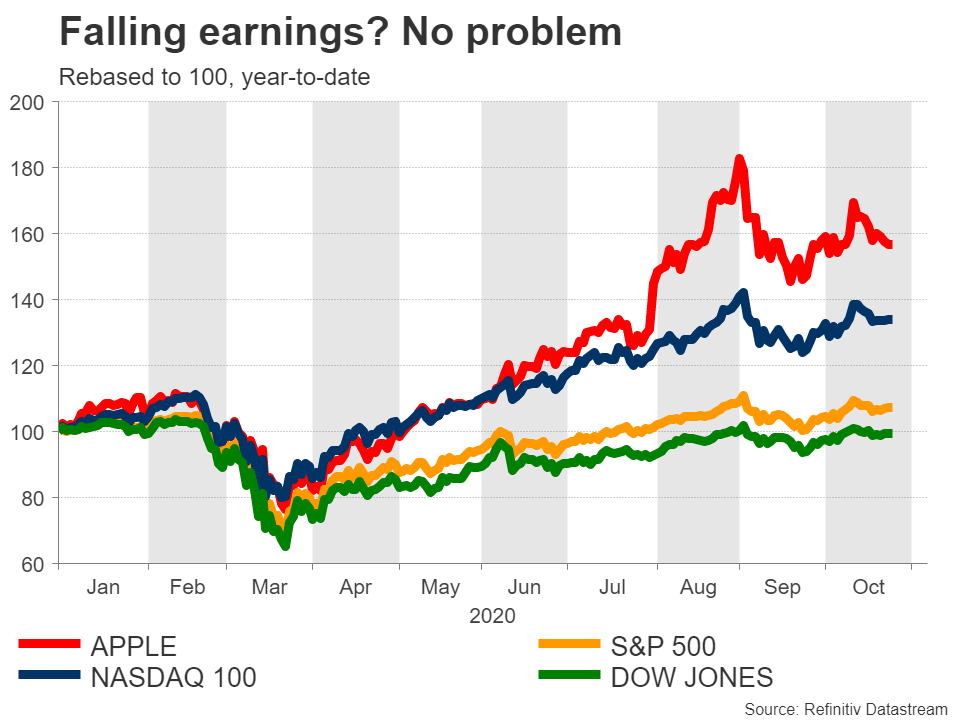 Plus, the pandemic forced Apple to push back the release of its new line of products, including the new generation iPhone, which was launched in October instead of September. Hence, the boost from those new products will only show up in next quarter’s results, not now.

More broadly, the sharp decline in interest rates means that most bonds are now negative yielding assets, which naturally pushes investors towards stocks in general, and especially towards higher-quality names with promising growth prospects, like Apple.

For this quarterly report, the bar has admittedly been set so low that a beat in earnings may be a relatively easy feat. Indeed, Apple has a strong track record of beating earnings estimates, having done so in six of the preceding seven quarters. In this case, the stock could shoot higher to challenge the 118.0 region, with an upside break turning the focus to the October high of 125.50.

Otherwise, if earnings disappoint or if the guidance by the company’s management is not as upbeat as markets expect, the stock could drift lower. Initial support to declines may be found near the 112.0 area, where a downside violation could open the door for the 105.0 zone.

Valuation is becoming a problem

In the bigger picture, Apple’s valuation has gone through the roof in recent months, which is a concern. Let’s look at a simple valuation metric, the forward price-to-earnings ratio. This number denotes the dollar amount someone needs to invest to receive back one dollar in annual earnings, so the higher it is, the more ‘expensive’ a stock is considered.

Apple’s currently rests at 29.4x, which is lower than the 33.8x for the technology sector, but almost double what it had been historically until 2019. The company also trades at 6.4x forward 12-month sales and has a staggering forward price-to-book ratio of 57x, both of which are red flags.

The bottom line is that so much optimism has been baked into the stock at this stage, that it is almost priced for perfection. This is worrisome because if several years of robust growth are already in the price, that leaves little room for substantial upside from here in case everything goes as planned, but plenty of downside in case anything challenges this rosy narrative. 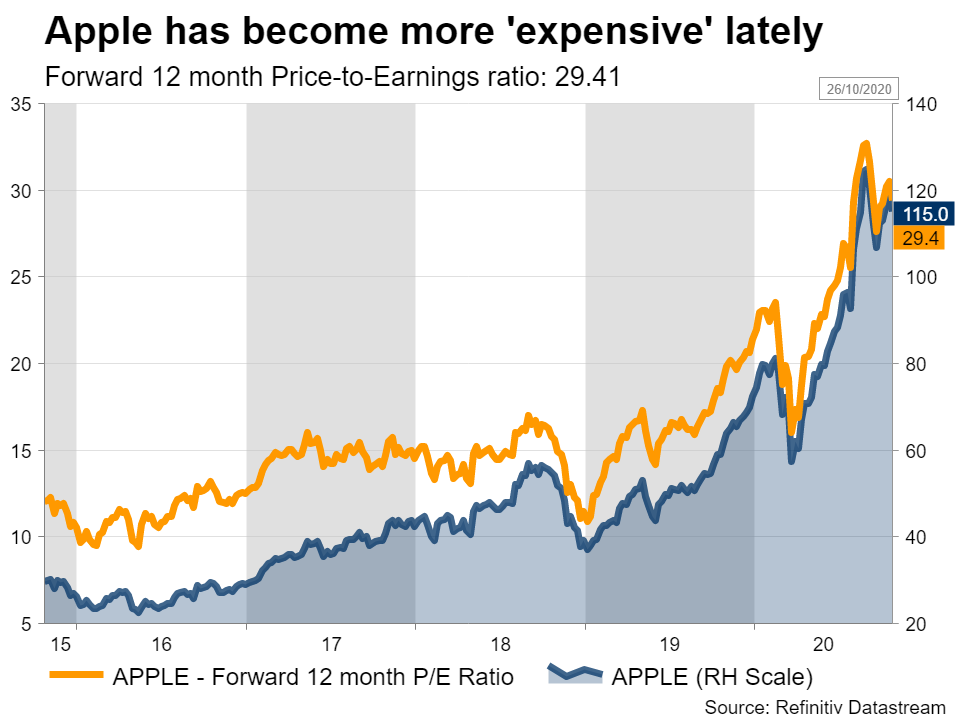 To be clear, all this doesn’t imply that Apple has lost its magic. It’s still a great company with a healthy balance sheet, a very loyal customer base, and strong management – all of which leave it in a good position to weather out this crisis and come out stronger. It is investors that may have gotten a little overly excited.

Ever since the March bottom, most of the stock market’s gains have come because tech heavyweights like Apple, Amazon, Google, Microsoft, and Facebook have soared so dramatically, dragging the entire market up with them. These five firms now account for roughly 23% of the entire S&P 500, which is a staggering level of market concentration.

As such, any major moves in these five stocks could have a huge impact on the entire market, which elevates the importance of this week as all five of them will report earnings. Microsoft will kick off the show on Tuesday, while the rest will report on Thursday.