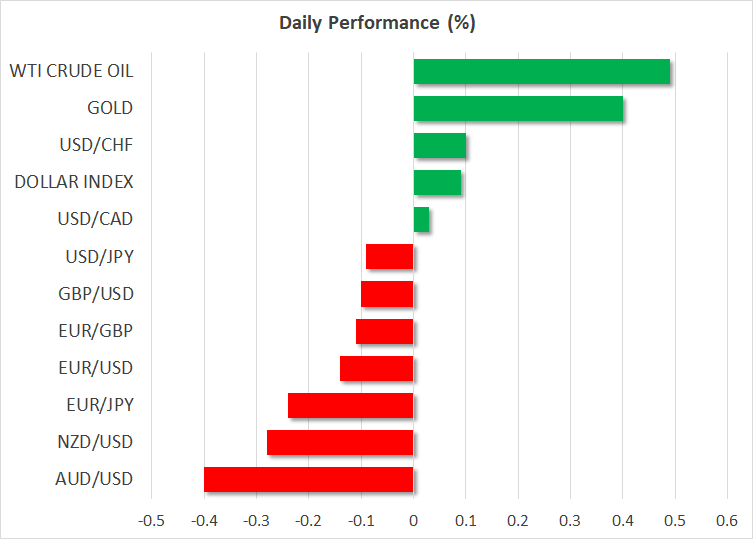 Wall Street just had its most bruising week since the onset of the pandemic in March 2020 and it could get even rockier for stocks in the coming days. The Federal Reserve is poised to give a formal nod to liftoff on Wednesday and the earnings season is about to heat up with a host of major names set to report this week. Meanwhile, tensions between the West and Russia over Ukraine show no sign of easing, adding to the market angst as a conflict could potentially deepen the global energy crisis.

The S&P 500 (-1.9%) closed below its 200-day moving average on Friday for the first time since June 2020, while the Nasdaq Composite (-2.7%) plunged to levels last seen in June 2021. The selloff for the Dow Jones (-1.3%) remained much more contained as the index continued to benefit from the growth-to-value rotation.

Is the Fed getting ready for 50-bps hikes?

This week’s events could determine whether this rotation becomes a longer-term shift. Although the Fed is not expected to announce any policy changes this week, investors are nervous about the pace of policy normalization for the rest of the year. With some traders beginning to price in a half-point rate hike, there is a growing fear that the Fed will move too aggressively to rein in soaring inflation.

Nevertheless, Treasury yields slipped again on Monday. The long end of the curve has seen the steepest pullback. That could partly be a sign that investors are worried Fed policy will become too tight and are therefore less optimistic about the long-term growth prospects of the US economy. But it could also be down to rising safe-haven demand for government bonds amid the increased frictions on the Ukrainian border.

Gold climbs as Russia and Ukraine edge towards conflict

After several rounds of diplomacy, there’s been no progress in diffusing the heightened hostilities between Russia and Ukraine. With both the US and UK withdrawing some embassy staff from Kiev, there is a real threat of an imminent Russian invasion.

Gold headed higher on Monday on the back of the geopolitical tensions, with fresh Houthi missile attacks on Saudi Arabia and the United Arab Emirates further boosting the flight to safety.

The precious metal was last up 0.4% to trade around $1,840/oz. The Japanese yen was also in demand, appreciating against all of its major peers, while the US dollar was slightly firmer.

The euro was choppy at the start of the week as the flash PMIs for January painted a mixed picture of the Eurozone economy. French PMIs disappointed badly but Germany’s figures beat the top estimates. On the whole, however, it appears that the Eurozone economy continues to expand despite some Omicron restrictions. A bigger concern for Europe is if the energy crisis were to escalate should Russia go to war with Ukraine.

The single currency was off its lows in mid-morning European trade to stand around $1.1325. The pound fared a little worse as the UK’s PMIs declined in January. Traders will be keeping an eye on the happenings in Downing Street this week as the inquiry into the ‘partygate’ scandal is due to be published at some point in the next few days.

But the worst performer so far today is the Australian dollar, slipping 0.5%, followed by the New Zealand dollar, which came under pressure from fresh Covid curbs being announced yesterday by Prime Minister Jacinda Ardern.

Is a rebound in store for Wall Street?

In equity markets, a mixed session in Asia failed to shore up European indices, which slumped not long after the open. The troubling headlines about Ukraine could be dampening the mood in Europe even as US futures indicate an easing in the selloff.

Netflix shares crashed more than 20% on Friday but the Q4 earnings could yet turn Wall Street’s fortunes around as several big tech and other major US companies will announce their latest results this week, starting with IBM after today’s market close.