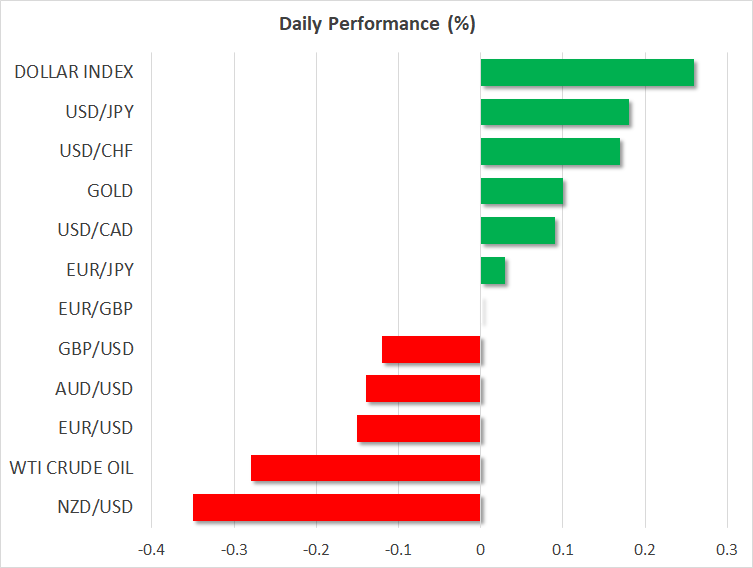 The Federal Reserve warned that moving to a “restrictive stance of policy” was essential in the minutes of the July meeting, as it fights to get inflation down to its 2% price objective. More importantly, policymakers agreed that monetary policy might have to stay restrictive for “some time” as they didn’t see much prospect of inflation subsiding quickly.

However, as interest rates headed higher, the Fed also signalled that slowing the pace of policy rate increases would “likely become appropriate”, providing some relief for investors worried about overtightening.

Overall, the minutes echoed what Fed speakers have been messaging since the July gathering, reinforcing the view that there’s a long way to go until the job is done. The only silver lining here is that policymakers’ shift to being entirely data driven does give them the flexibility to alter course as they see fit. Although judging from their remarks post the last CPI report, they’re going to need a lot more convincing that inflation has indeed peaked in the United States.

Rate hike expectations firmed slightly after the minutes, but investors continued to price in a rate cut in the second half of 2023. This likely suggests that either markets are more confident than the Fed about inflation being on the way down or they don’t think the central bank will be able to hold rates too high for too long if the US economy enters a recession.

The 10-year Treasury yield jumped above 2.90% in the aftermath, lifting the US dollar above the 135-yen level. The greenback has now more than recouped its losses following the soft July inflation readings as the combination of hawkish Fed rhetoric and the gloomier outlook elsewhere has reinvigorated the safe-haven currency.

Investors will get the chance to hear fresh comments from the Fed later today when Kansas City Fed chief Esther George and Minneapolis Fed President Neel Kashkari take to the podium. The latest weekly jobless claims and the Philly Fed manufacturing index will also be watched.

Meanwhile, stocks on Wall Street came off their lows after the minutes, which were not perceived to be particularly hawkish by equity traders, but were unable to entirely reverse their losses. The S&P 500 closed 0.7% lower and the Nasdaq slipped too. E-mini futures were last trading marginally in the red.

Stocks have staged an impressive rally since the lows of mid-June, with the S&P 500 recovering by about 17% and the Nasdaq Composite by about 21%. However, with the former encountering some resistance at its 200-day moving average, the benchmark index may be due for a correction before its next leg up.

On the earnings front, retailers will remain in the spotlight with Kohl’s announcing its results later today.

In the broader FX market, the commodity-linked Australian, Canadian and New Zealand dollars were somewhat steadier, though still struggling against their US counterpart as China worries and heightened recession risks weighed on the outlook for commodities demand.

Stronger-than-expected CPI numbers out of the UK yesterday cast another shadow over the country’s growth prospects, as well as over the rest of Europe, as the data fuelled concerns that Britain and the euro area will experience persistently higher inflation than other major economies.

Natural gas prices in Europe are skyrocketing, with Dutch TTF gas futures reaching a record high over the last day. There are fears that disruptions caused to the transportation of fuel via the Rhine River due to falling water levels will exacerbate the gas shortages as Russia is still refusing to boost gas supplies via the Nord Stream pipeline.

Nevertheless, the euro has been unusually steady over the last month, keeping above the crucial $1.01 support.

The pound on the other hand, has been more volatile during the same period, fluctuating with the swings in risk appetite as well as to domestic factors. Cable briefly breached the $1.20 level earlier in the session before bouncing back up to around $1.2050. 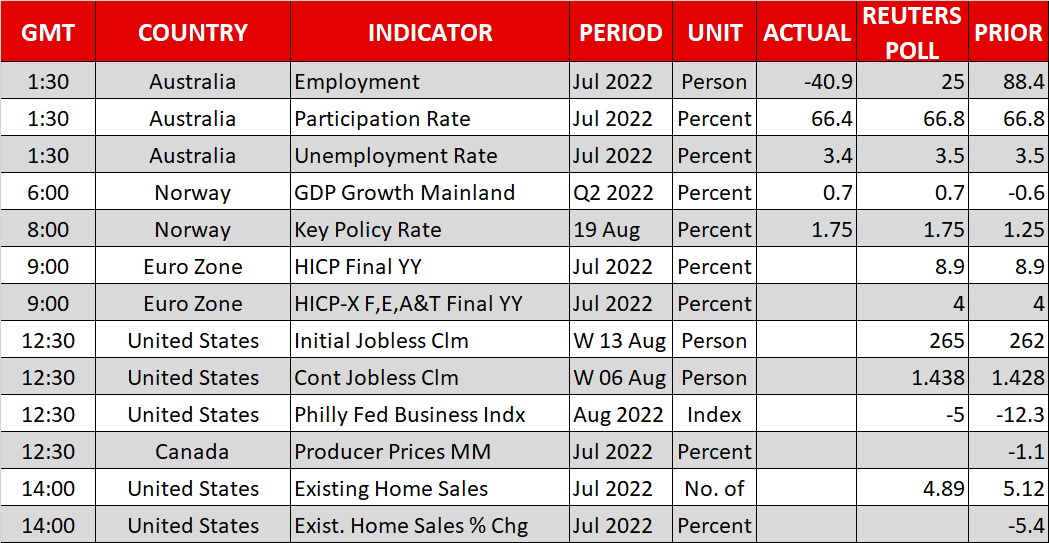