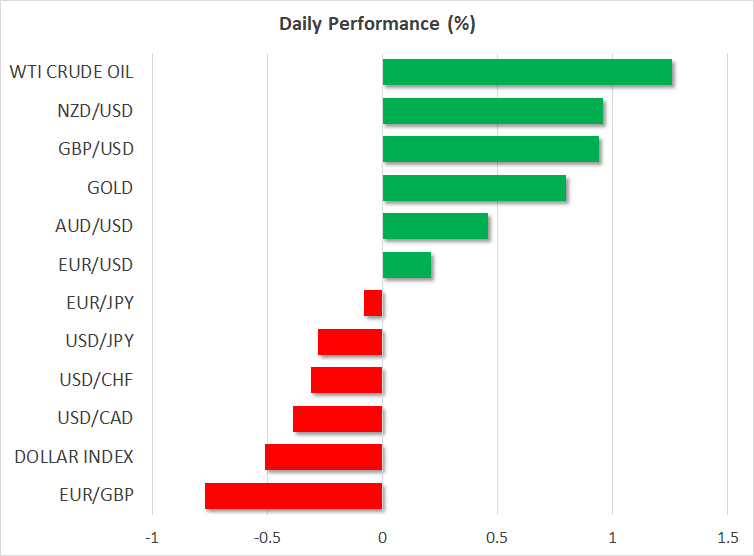 Traders expect more than 100bps hike by the BoE

The US dollar continued outperforming all its major counterparts on Monday, with the dollar index hitting a fresh 20-year high. Although it eased somewhat during the Asian session today, its broader uptrend remains intact with its tank being fueled by two pumps: an ultra-hawkish Fed and concerns over the performance of the global economy.

The pound was the currency that took the most advantage of the dollar’s pause this morning. Following a two-day plunge to a record low of $1.0327 due to fears that Friday’s announced fiscal package will stretch the UK government’s debt to unmanageable levels, there has been a lot of speculation that the BoE may need to act more aggressively at its upcoming meetings, with the Bank itself releasing a statement saying that it will “not hesitate” to hike rates and that it was “monitoring developments closely”.

The British currency recovered approximately 5% from that record low, while market participants are now assigning around a 90% chance for the BoE to raise rates by 125bps when it meets in November. The remaining 10% points to an even larger 150bps hike. Yes, expectations of a more forceful BoE could prove supportive for the pound in the short run, but they could also result in more concerns with regards to the future performance of the UK economy.

Following the contraction during Q2, the slide in the UK composite PMI further below the boom-or-bust zone of 50 in September adds more credence to the view that the UK may have already entered recession. Therefore, until there is credible evidence that inflation is easing, and that the economy is doing better than anticipated, the path of least resistance for the pound could remain to the downside, especially against the almighty greenback.

European and US equity indices continued to slide yesterday on worries that faster tightening by major central banks could further impair the global economy, with the only exceptions being the UK FTSE 100, which closed fractionally in the green, and Italy’s FTSE MIB, which gained 0.67%.

The former may have avoided any losses due to a plunging pound early in the day. After all, many companies of the index generate profits in other currencies, so when the pound weakens, they earn more when that money is converted back into pounds. As for the latter, it may have enjoyed decent gains after the center-right coalition secured a majority in both houses of the Italian parliament, which may have been interpreted as a chance for the nation to eventually enter an era of political stability after years of confusion and shaky coalitions.

In the US, the Dow Jones joined the Nasdaq and the S&P 500 in entering a bear market, also breaking below its June low. The other two came very close to their lows, and although the futures market points to some recovery, a break lower may be only a matter of time. The fundamental drivers have barely changed. Investors have been selling US equities throughout the whole year amid fears that an aggressive Fed could drag the US economy into a deep recession, and up until now, there is no convincing reason for them to stop doing so.

Elsewhere, oil prices recovered somewhat today, after tumbling to a nine-month low yesterday under the pressure of a strong dollar, but also due to mounting concerns that shrinking economies worldwide will restrain fuel demand. Following remarks by the Iraqi oil minister that OPEC and its allies are monitoring the oil price situation, there has been some speculation that the group could intervene to support prices by reducing output. However, any cuts may have to be larger than the 100k bpd agreed at the latest gathering if they want to achieve something lasting and meaningful.

Gold also rebounded today, after hitting a new two-year low on Monday on the back of a strengthening dollar. With yields around the world surging to multi-year highs, a bullish reversal in the precious metal appears to be off the cards for now. Even if today’s recovery continues for a while more, it may prove to be just a correction, offering better entry points to sellers.