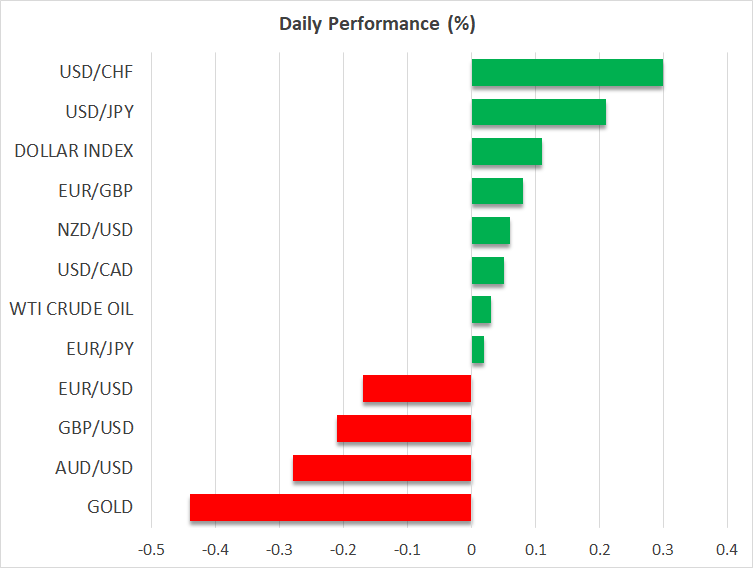 Treasury yields headed higher and the US dollar recovered further from multi-week lows ahead of what may not turn out to be an uneventful FOMC meeting after all. The Fed will announce its latest policy decision at 18:00 GMT, with Chair Powell taking the virtual podium 30 minutes later. The US central bank is widely anticipated to keep monetary policy and its guidance unchanged today, having successfully soothed market fears of a premature withdrawal of stimulus.

Fed policymakers have been singing from the same hymn sheet for weeks now and there seems to be a strong consensus among FOMC members that the upward pressure on prices that businesses are experiencing at the moment won’t last. However, markets are not so convinced as food and commodity prices keep ticking higher, leading to a fresh surge in inflation expectations. The US 10-year breakeven inflation rate has risen towards 2.4%, hitting a 7-year high this week, helped further by a jump in the US consumer confidence index in April.

Bond markets are reacting accordingly, with the 10-year Treasury yield rallying yesterday and climbing above 1.65% today. European yields are up sharply too. After what has so far been a calm month for bonds, markets could be testing the Fed as there can be little doubt that US growth is firing up. However, there is a risk that if Powell acknowledges a strengthening recovery in his press conference today, markets will have a hard time believing his pledge to keep rates near zero through 2023.

Rising inflation expectations are not the only thing pushing yields higher. The Biden administration’s massive spending plans are also weighing on Treasuries. President Biden is expected to use his joint address to both chambers of Congress later today at 9 pm ET to sell his $2 trillion infrastructure and jobs plan as well as the recently unveiled “American Families Plan” amounting to an additional $1.5 trillion.

The plans have been met by a mixed response from lawmakers as they also involve tax hikes on the rich and businesses. The tax hike proposals have had some dampening effect on equities but so far, the reaction has been limited as investors expect the final bills to be watered down versions. Nevertheless, if Biden reveals new spending ambitions on top of what has already been outlined, it could stoke Treasury yields.

On Wall Street, however, traders will be more wary of the Fed and the latest earnings releases. Record earnings for Q1 have given stocks only a marginal lift. Though, that could change following Microsoft’s and Alphabet’s stellar results after Tuesday’s closing bell and more Big Tech earnings on the way. Apple and Facebook will report their earnings after today’s market close, followed by Amazon and Twitter on Thursday.

The S&P 500 and Nasdaq Composite both closed lower on Tuesday but the Dow Jones managed to marginally end the day in positive territory. Futures were last pointing to a mixed open today.

In currency markets, the dollar index continued its upward crawl but was lacking momentum on likely caution of more dovish talk by Powell. The Japanese yen was underperforming again on fears that Japan’s fourth Covid wave will be its largest, endangering the economic recovery just as the outlook in other parts of the world is improving.

The Australian dollar is not having a good time either. Today’s CPI figures out of Australia were far weaker than expected and one measure of core inflation fell to the lowest on record, underscoring the view that the RBA will probably raise rates long after the Fed has begun its normalization process.

The Canadian dollar, meanwhile, eyed domestic retail sales numbers due later today as it hovered near 6-week highs against the greenback. 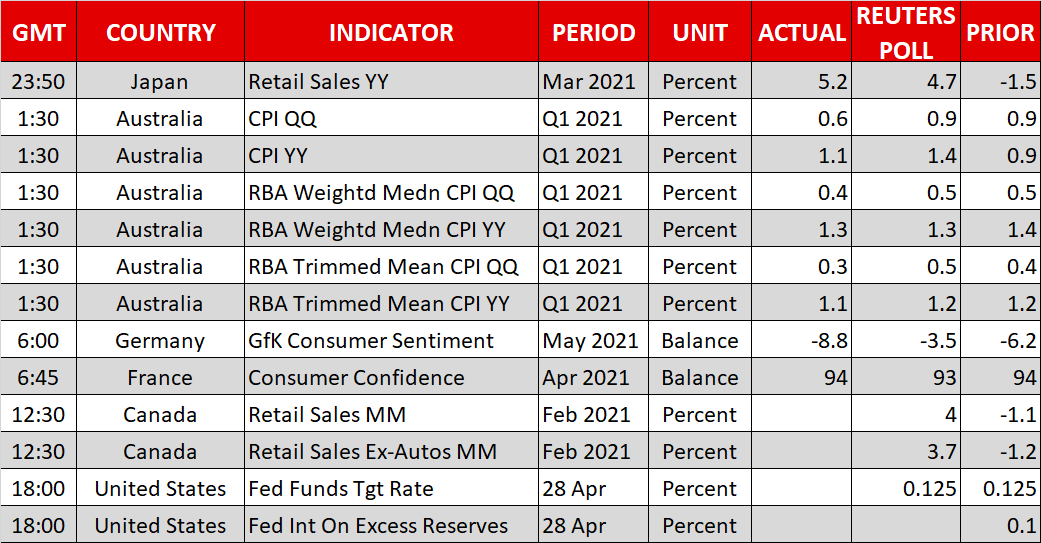