Last week, the Fed released the results of its annual bank stress tests, which are designed to evaluate each bank's resiliency under an explosive cocktail of economic shocks that would lead to a deep recession. Specifically, the examined parameters entailed a 10% unemployment rate, a 40% decline in commercial real estate prices alongside a 55% collapse in major US equity indices. On the positive front, all 33 banks participating in the test appear to be able to withstand this severe hypothetical downturn, indicating that they have indeed learned their lessons from the 2008 crisis. Can these developments translate into gains for their stock prices?Mixed annual performance ahead of Q2 earnings

The banking sector has been beaten down so far in the year despite its historical outperformance in periods of rising interest rates and persistently high inflation. However, the Fed’s latest stress tests came out to improve the sector’s outlook as the banks seem prepared to navigate through the potential upcoming headwinds due to their solid balance sheets. Moreover, the long-lasting sell-off in the industry’ stocks has made them considerably more attractive for investors planning to rebalance their portfolios on fears over an upcoming recession ahead of the second half of 2022. 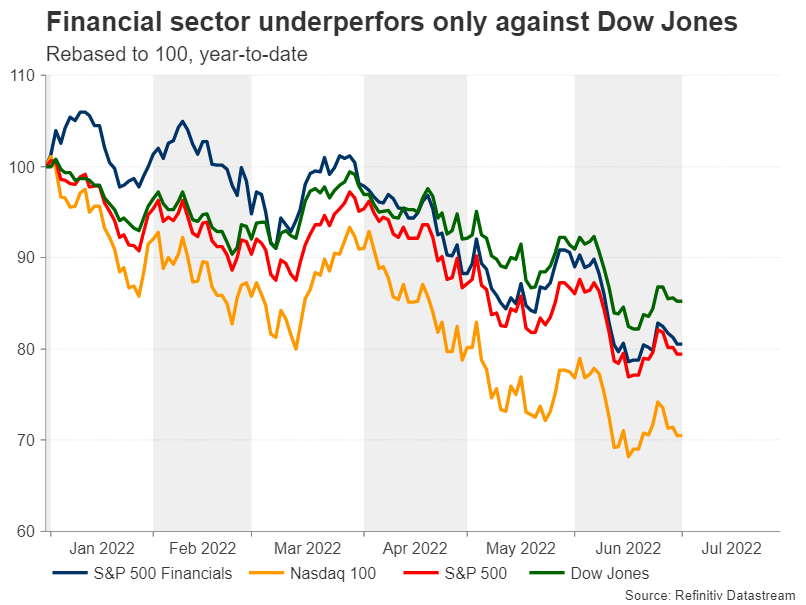 Looking ahead at the upcoming earnings season, investors will be seeking an updated view on the impact of the constantly deteriorating macroeconomic environment on the largest US banks' financials. An important theme would be the magnitude and direction of shifts in loan loss provisions, which are essentially the banks' internal estimates for non-performing loans and potential defaults. Should that metric deteriorate as monetary tightening and high inflation continue to erode people’s income and savings, the banks would need to set aside higher reserves to insulate their balance sheets, which would in turn weigh on earnings.

Additionally, investors and markets will be closely eyeing the severity of the anticipated decline in revenues generated from investment banking and trading fees, which were the main driving forces behind last year’s outperformance.

After the major US lenders managed to easily sail through the Fed’s annual stress tests, their stock performance failed to reflect on that positive news. On the one hand, all examined banks proved that they are financially robust but as always some ended up faring better than others. Thus, investors were anticipating the individual reports concerning each bank’s renewed estimate of capital requirements as well as their plans on future dividend and buyback policies, which were reported last Monday. 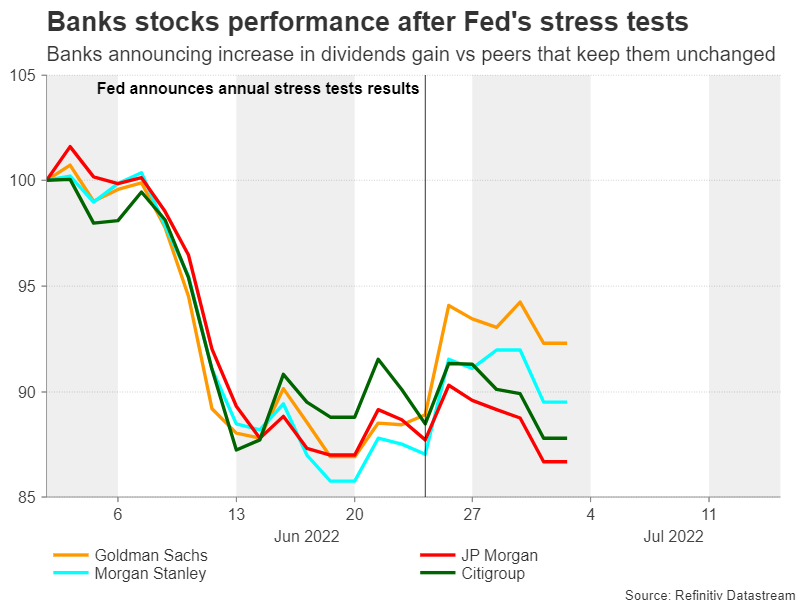 Even though future guidance may not have been too detailed as banks prefer to retain some flexibility going forward in this turbulent year, it was obvious that banks announcing an increase in their dividend payout rate such as Goldman Sachs and Morgan Stanley outperformed relative to their counterparts that kept their rates intact.

Overall, it seems that a potential deteriorating macroeconomic outlook and a disappointing earnings season could open the door for another downleg in stock markets. Therefore, the banks’ proven resilience to a potential recession coupled with their historical outperformance in such periods could make them an attractive play going forward into 2022.