EURUSD has breached the key March 2020 trough of 1.0635 after recently acquiring positive legs from the more than five-year recorded low, which came just shy of the January 2017 low of 1.0340. The simple moving averages (SMAs) are nurturing the one-year prevailing downtrend in the pair.

The Ichimoku lines are mirroring a pause in the latest downward driving forces. Simultaneously, the short-term oscillators are indicating a clear dwindling in negative momentum. The MACD has detached itself from its red trigger line and is climbing towards the zero threshold, while the rising RSI is looking set to improve even further into the bullish territory. The stochastic oscillator is holding its positive charge and the %K and the %D lines are flirting with the overbought 80 barrier.

If the pair manages to close above the 1.0635 obstacle, nearby upside limitations could commence from the 1.0726-1.0774 resistance band that extends back to the base formed over the early April to mid-May 2020 period. Overstepping this deterrent, which is fortified by the falling 50-day SMA, the bulls may then target the 1.0900-1.0960 resistance region, coinciding with the Ichimoku cloud, and the approaching 100-day SMA presently at 1.1005. Piloting higher, the spotlight shifts toward the 1.1185 high.

Otherwise, if the price recoils beneath the 1.0635 barrier, and further fading in positive pressures develops, initial support could stem from the red Tenkan-sen line at 1.0490 and the 1.0459 low. This realignment with the broader downtrend may direct the pair to battle the newly recorded low of 1.0349 and the 1.0340 mark related to the January 2017 trough. If sellers achieve a dive past these obstacles, the 1.0141-1.0218 support barricade that stretches back two decades to mid-July 2002 could heighten concerns about negative tendencies should it fail to curb selling interest. Any additional moves lower may then be aimed at the 1.0059 low and the parity level.

Summarizing, EURUSD buyers are fighting back in a heavily lopsided bearish picture. For positive prospects to grow, the price would need to climb over the 1.0726-1.0774 obstacle. Meanwhile, for optimism to be restored in the pair, a hike above 1.1185 may be necessary. 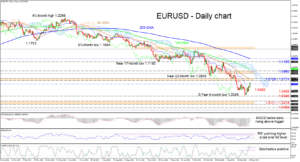