Gold is trading near its lower Bollinger band around 1,793 after the four-week decline from the 1,998 peak was curbed by the 1,780-1,788 support base, which was formed by the lows from the second half of December 2021 until the end of January 2022. The longer-term 100- and 200-day simple moving averages (SMAs) are reflecting the stifled bullish trend in the price, while the rolling over of the 50-day SMA, is suggesting that the descent in the commodity has deepened.

The short-term oscillators are skewed to the downside painting a dull picture for positive developments in the yellow metal. The MACD, south of the zero threshold, is sliding beneath its red trigger line, while the downward pointing RSI looks set to dip further into oversold territory. Moreover, the stochastic lines, which are underneath the 20 oversold level, are also hinting of further selling in the precious metal.

If the current trajectory persists, sellers could get another crack at the lower Bollinger band at 1,793 and the adjacent 1,780-1,788 immediate support base. Should this key support obstruction fail to keep sellers at bay, the price could then target the 1,750-1,763 support region that extends back to October 2021. Further deterioration in the commodity may then confront downside constraints in the vicinity of 1,715-1,724.

Summarizing, gold is sustaining a sturdy bearish bias beneath the SMAs and the 1,858-1,868 resistance zone. A dive below the 1,780-1,788 boundary may add credence to further negative tendencies in the commodity. That said, for gold’s shine to return, the price would need to climb north of the 1,910-1,922 area. 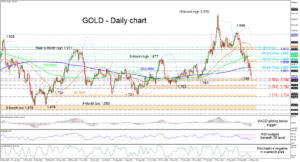