PCE inflation data will wrap up a very busy week for the US dollar on Friday. The Fed’s favourite inflation metric will be accompanied by personal income and spending numbers when released at 13:30 GMT. No peak in sight for US inflation

The core PCE price index jumped to 4.7% year-on-year in November. It is projected to have inched up to 4.8% year-on-year in December. The monthly pace is expected to have stayed at a somewhat elevated level of 0.5%. Although this particular price measure remains some way below the broader consumer price index, which has skyrocketed to 7%, it would still reach the highest rate in nearly 39 years if the forecast is met, underscoring just how badly inflationary pressures have spiralled out of control. 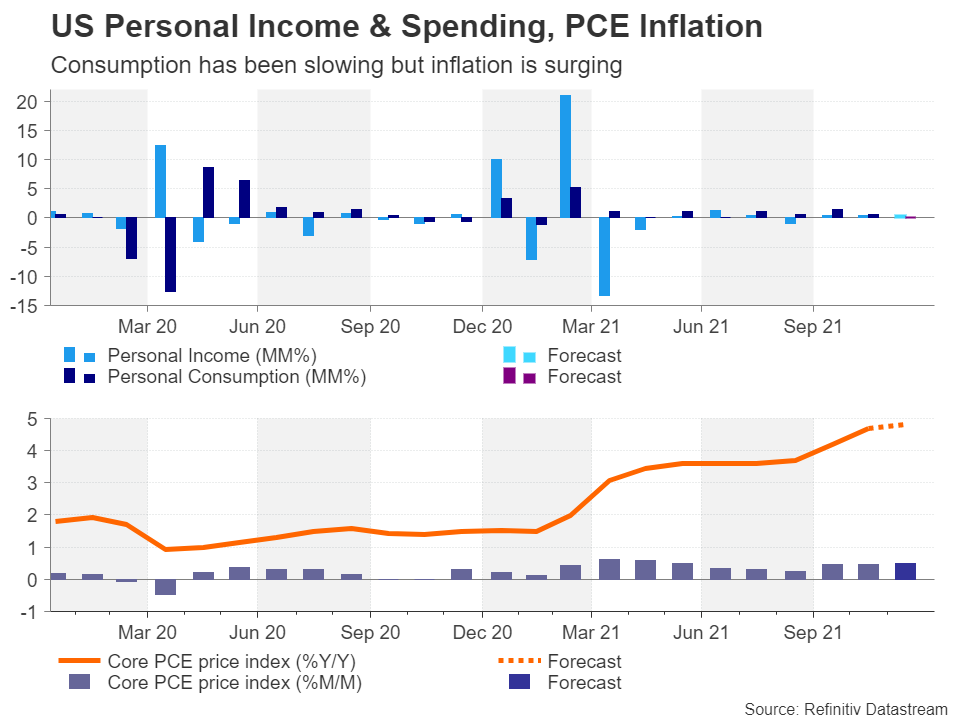 The other data in the upcoming report are expected to be more mixed. Personal income likely rose by 0.5% month-on-month, but personal consumption is forecast to have declined by 0.6% m/m. The drop is unlikely to alarm the Fed or investors, however, as consumption has generally been strong lately and the advance GDP readings just confirmed this.

Consumer spending rose by 3.3% in the fourth quarter, helping the economy to grow at an annualized rate of 6.9%, well above expectations of 5.5%.

All this reinforces the view that the Fed no longer has an excuse to bide its time and needs to act quickly to bring inflation closer to its 2% goal. And that was the message from Chair Powell on Wednesday, who signalled that multiple rate hikes are on the way, starting in March.

Can the dollar extend its bull run?

Unsurprisingly, the dollar is flying, backed by soaring short-term yields. The dollar index just hit a 19-month high. If the upsurge continues, the 123.6% Fibonacci extension of the November-January down leg at 97.48 is a realistic target.

In the event, however, that the rally runs out of steam and profit-takers enter, the index could hit a bump at the 50-day moving average, just above 96.0, which is also the 61.8% Fibonacci retracement.