The Bank of England will announce its September policy decision a week later than planned on Thursday (11:00 GMT) after the meeting had to be postponed until after the funeral of the late Queen Elizabeth II. As life in Britain returns to normal following a 10-day mourning period, policymakers are faced with the grim reality of a darkening economic outlook at a time when inflation is hovering around 10%. Markets are betting that the BoE might have to accelerate its tightening pace for the second straight meeting as the pound licks its wounds near 37-year lows.Recession fears are growing

After a strong recovery from the pandemic slump that lasted till the first quarter of 2022, the UK economy is now teetering on the brink of a recession. The soaring cost of living, driven mainly by higher fuel prices, has squeezed household incomes, hurting spending in a consumer-led economy. Businesses are also struggling from higher energy bills as well as from rising borrowing costs, while the political uncertainty at such a critical time hasn’t exactly been reassuring for investors. Even the tight labour market is showing some signs of cooling off. 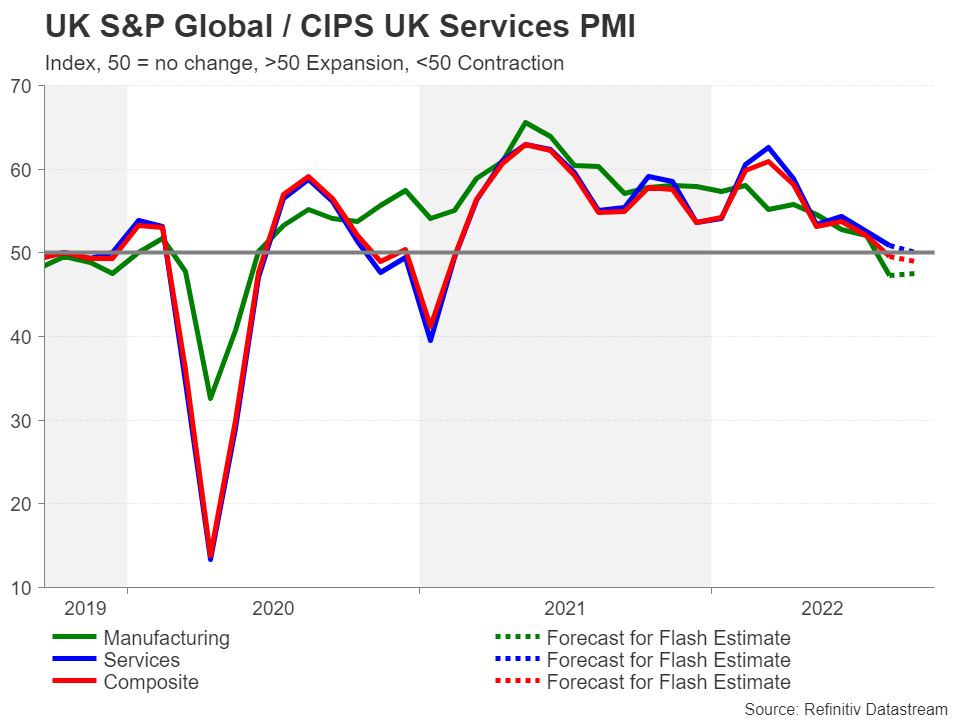 GDP fell marginally in the second quarter and the likelihood of another contraction in Q3 has risen following the Queen’s death, as the nation came to a standstill. The latest flash PMI estimates are due on Friday and are expected to show that business activity declined for the second month in a row in September. This puts the Bank of England in the unenviable position of having to hike interest rates when the economy could already be in technical recession.

Will there be any relief from high energy prices?

But the bigger dilemma now for policymakers is whether they should tighten the monetary policy screws even more quickly. Although there was relief when the headline rate of inflation moderated slightly to 9.9% in August, it’s likely to rise again in the coming months as the energy price cap set by the UK electricity regulator will increase by 80% from October.

It’s not entirely doom and gloom, however, as both oil and gas prices have significantly come off their recent highs and unless a fresh geopolitical crisis unfolds, it’s quite likely that energy prices have peaked. Given the aforementioned and the BoE’s overly cautious attitude to this tightening cycle to begin with, it’s hard to envision there would be a majority within the Monetary Policy Committee (MPC) to hike interest rates by 75 basis points.

Last time, the Bank doubled its pace, hiking by 50 bps, and economists think they will repeat that in September. Markets on the other hand are about 75% convinced for a 75-bps increment. It’s possible that the recent jumbo-sized hikes from the Fed and the European Central Bank have strengthened the case for the MPC hawks. 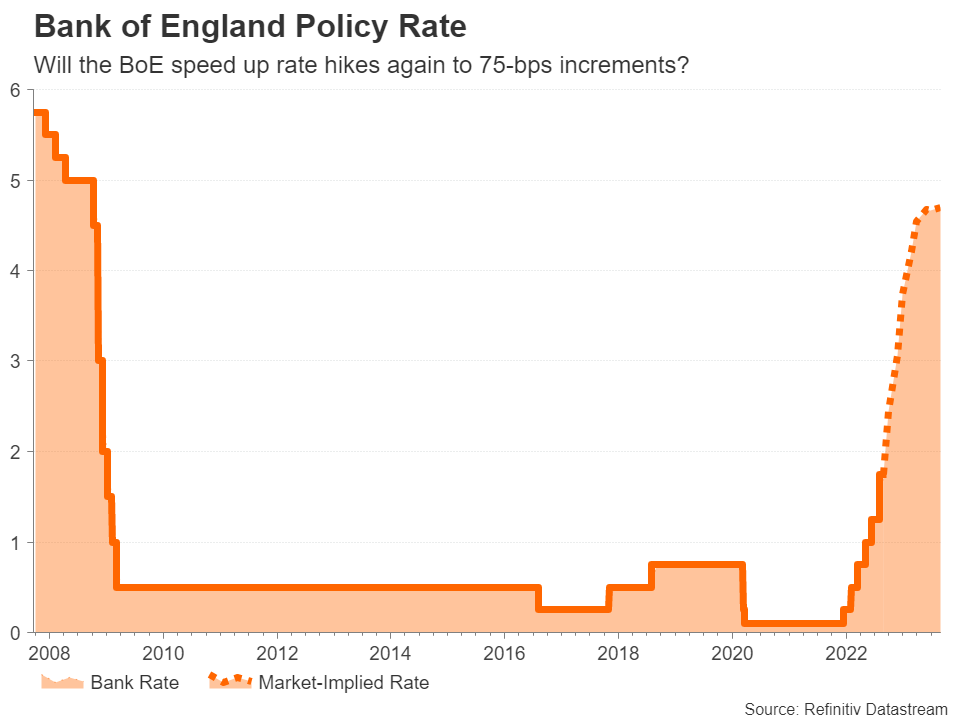 But there is another reason why the Bank might be more inclined to surprise with a larger move on Thursday – the plunging pound. The British currency has been in freefall for much of the year, losing 15% of its value against the US dollar. A weak exchange rate is undesirable during periods of high inflation as it exacerbates inflationary pressures by making imports more expensive.

Could a steep rate hike spur a rebound?

If the MPC does not disappoint the hawkish expectations, sterling could bounce off the current support region of the 161.8% Fibonacci extension of the July-August downleg around $1.1426 and make a dash for the 20-day moving average at $1.1575. A stronger rebound could see the previous peak of $1.1738 being tested.

However, should the Bank raise rates by only 50 bps, or a 75-bps increase is accompanied by a not-so-hawkish statement, there would be little to stop the pound from dropping to fresh multi-decade lows. The 200% and 261.8% Fibonacci extensions of $1.1221 and $1.0890, respectively, would be the obvious targets to the downside.

Nervousness ahead of the mini budget

But the Bank of England decision is not going to be the only thing investors will be watching this week. On Friday, the UK’s new chancellor, Kwasi Kwarteng, will set out the government’s fiscal plans in an emergency mini budget. Kwarteng is expected to unveil further details around Prime Minister Liz Truss’ energy package as well as announce tax cuts, thought to be in the region of £30 billion.

Although a pro-growth budget would normally be seen as positive for the pound, investors are worried that Truss’ radical policies will fuel already high borrowing just as the yields on UK government bonds are surging. The whole plan revolves around the idea that tax cuts will pay for themselves by boosting growth. But that rarely turns out to be the case and fiscal discipline down the line seems inevitable from traders’ perspective, hence, the underwhelming response in sterling.